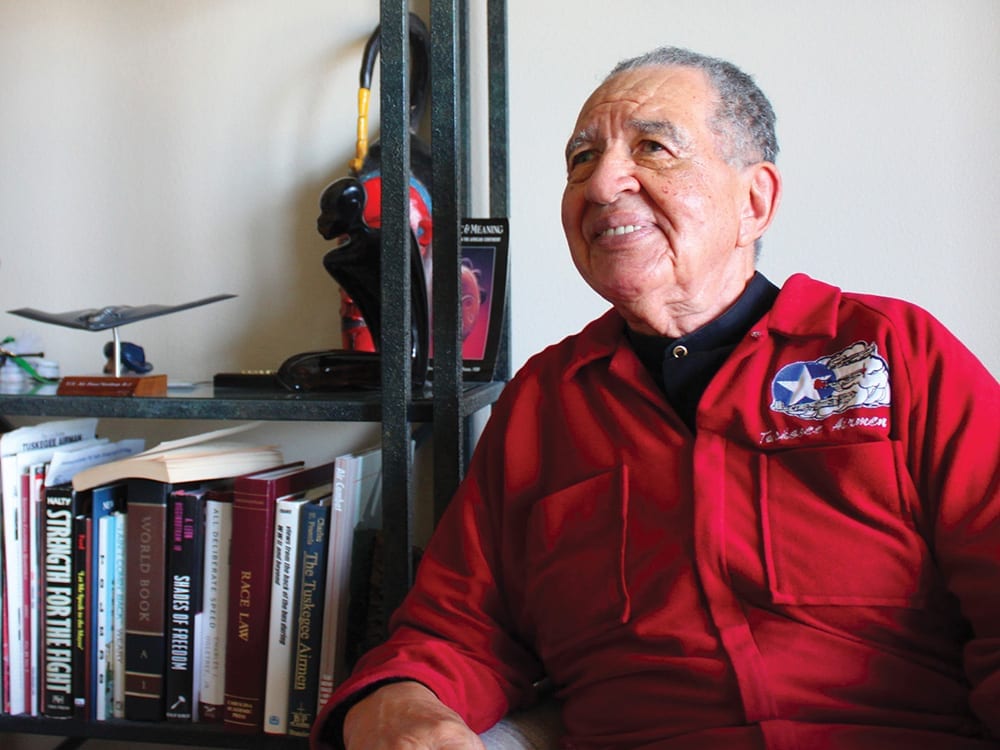 On Monday, February 15, Mitchell Higginbotham, a resident of Rancho Mirage, passed away at the age of 94. Higginbotham, a member of the highly celebrated Tuskegee Airmen, leaves a legacy for his family, his race and the nation.Tuskegee Airmen, named for the famed Tuskegee Institute where they trained, are the African American fighter and bomber pilots who flew to fame in World War II and whose courage played a pivotal role in the full desegregation of America’s Armed Forces.

Higginbotham received his wings more than 70 years ago on February 1, 1945 when he was commissioned as a 2nd Lieutenant in the U.S. Army Air Force. After graduation he was assigned to the 477th Bombardment Group based at Freeman Field in Indiana.

Higgenbotham along with fellow pilots of African American descent sparked the historic movement toward desegregation of the military with an event known as the Freeman Field Mutiny.

According to the nonprofit organization Red Tail, on April 5, 1945, Higgenbotham joined nearly 110 members of the 477th and boldly attempted to integrate an all-white officers’ club.

At the time, Military regulations stated any officers’ club was open to any officer; however, Freeman Field had two officers’ clubs—one was open to trainees and the other was open to supervisors. Not surprisingly for the time, all of the Black officers were classified as trainees, and the white officers were classified as supervisors. Although only three of the Tuskegee Airmen were court marshaled for their brashness, the protest ultimately proved impactful. The 477th was subsequently moved from Indiana to a base in Kentucky—and, the rest is history.

After his tour in the military, Higgenbotham attended the University of Colorado where he earned a Master’s Degree in Labor Relations. Over the years, he worked on the staff of the Urban League of Pittsburgh; managed the unscheduled take-offs and landings of aircraft at the Greater Pittsburg Airport; and, eventually relocated to Los Angeles where he worked as a county probation officer until his retirement.

A longtime resident of Dan Point, Higgenbotham lived an active and involved life. He devoted time to a number of organizations including the National Tuskegee Airmen and the Los Angeles Chapter of the Tuskegee Airmen, in addition to the Dana Point Historical Society.

Two years ago, Higgenbotham moved to Rancho Mirage to be close to his brother. There he became active in the Tolerance Education Center of Rancho Mirage. Higgenbotham’s brother, Dr. Robert Higgenbotham. also served as a Tuskegee Airman.

On March 29, 2007, more than sixty years after they answered the call of their nation, Higgenbotham and his brother along with 200 surviving Tuskegee Airmen and the widows of those deceased, were awarded the Congressional Gold Medal by President George W. Bush.

Nearly 1,000 black combat and bomber pilots who trained as Tuskegee Airmen saw combat in Europe, the Mediterranean, and North Africa. They flew thousands of missions escorting bomber aircraft; and, although dozens died fighting, many were shot down and other held prisoners—the Tuskegee Airmen are highly praised and widely respected for incurring very few losses during their missions.

A service will be held in Higginbotham’s honor on Saturday, March 5 at noon at the Tolerance Education Center, 35147 Landy Lane, Rancho Mirage. A formal Tuskegee memorial service will also be held in his honor sometime in May.Photo by Max Haynes