Passing the torch: From generation to generation—the epic movement toward full equality in America 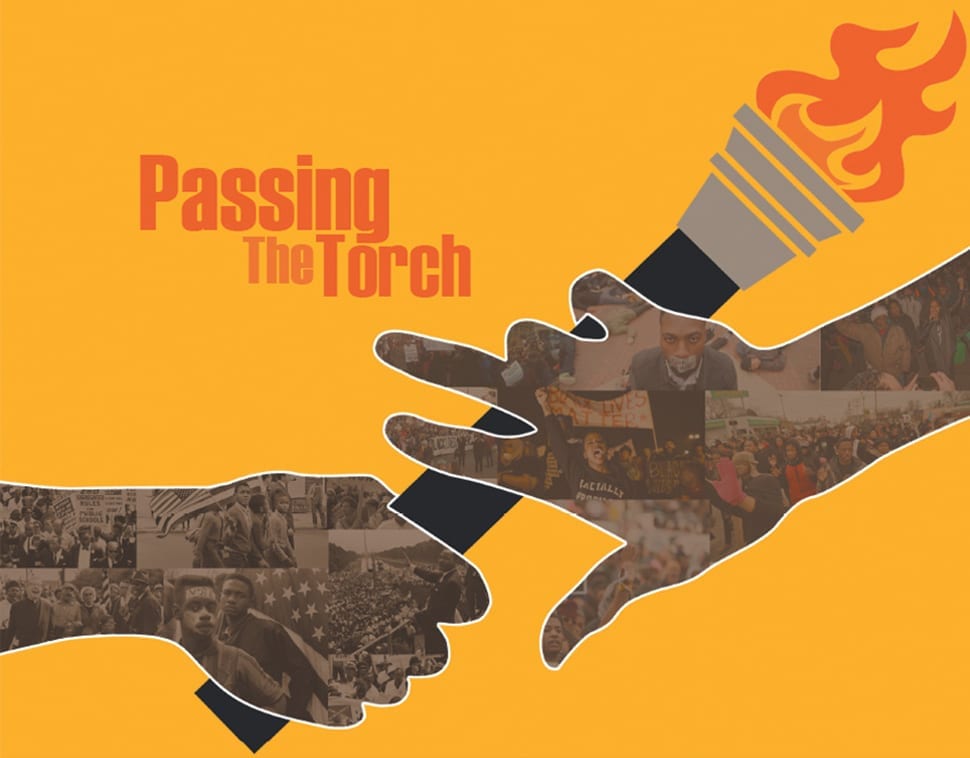 “And that which touches me most is that I had a chance to work with people, passing on to others that which was passed on to me. To me young people come first, they have the courage where we fail and if I can shed some light as they carry us through the gale. The older I get the better I know that the secret of my going on, is when the reins are in the hands of the young who dare to run against the storm. Not needing to clutch for power, not needing the light just to shine on me, I need to be just one in the numbers as we stand against tyranny.”

African Americans continue standing together across the nation and across generations—the graying lions of the Civil Rights era with the brass young lions of the Black Lives Matter Movement; two to three generations joined together in common cause, a race of people moving ever forward and yet, in some ways standing still.

The demands of a people across generations has remained the same—a universal call for fairness in all aspects of American life from health care to education to economic opportunity to a resolution to the critical disparities in criminal justice. Yes, there is progress, but there is still much work to do.

Also, although Blacks continue to die at greater rates from some conditions, the Centers for Disease Control tracked declines in death rates from heart disease, HIV and cancer. However, as Black longevity has continued to increase, the infant mortality rate of Black babies remains more than double that of whites.

Despite gains in health and longevity, the quality of Black life in America has stalled and in a lot of instances slid backwards—economists estimate Black America lost nearly 43 percent of its total wealth during the Great Recession.

The demands of a people across generations has remained the same—a universal call for fairness in all aspects of American life from health care to education to economic opportunity to a resolution to the critical disparities in criminal justice.

Across America, Black homeowners were grossly and disproportionately impacted by foreclosures—home ownership was the community’s greatest source of wealth. The economic tragedy not only impacted working class Blacks. It impacted all income brackets in the African American community. Surprisingly, according to a 2012 report by the American Prospect, The Collapse of Black Wealth, during the Great Recession, “high-earning Blacks were 80 percent more likely to lose their homes than their white counterparts.”

The data speaks for itself. Although 6.2 percent of whites with a credit score above 660 were given high-interest mortgages, by comparison, a full 21.4 percent of Blacks with a score of 660 or higher were given sub-prime loans.

The recession also shined a piercing light on employment disparity between races as the nation recovered. The recovery for Blacks lagged behind the rest of the nation. Last August for example, for the first time since 2007, the unemployment rate among African Americans fell below 10 percent—still, twice the rate for whites.

The impact of high unemployment rates in the Black community is further exacerbated by pay disparities. Today, Black men earn about 75 percent and Black women earn only 64 percent of what white men are paid to do the same or similar work.

As a matter of fact, Black women continue to do more with less. The impact this has on the African American community is measurable. Today 68 percent of Black households are headed by women compared to 18 percent in the 1950s.The pressing issues of health, wealth, education, employment and wages in the African American community are historical and have continued to coalesce members of the community across the boundaries of generations; however, there is one issue that has seized the passion of Black America as much or more than all the other considerations—and joined them in a galvanizing effort and unmitigated quest for fairness in the criminal justice system. Today, one in three Black men will probably go to prison at some point in his life.

According to statistics, America’s prison population grew a whopping 700 percent between 1970 and 2005. The epic growth was partly fueled by the school to prison pipeline— Black and Hispanic students account for more than 70 percent of school-related arrests and Blacks make up make up 40 percent of those confined. In addition, although Blacks represent only 16 percent of America’s youth, 37 percent of their cases are moved to criminal court; and 58 percent of those convicted are sent to adult prisons.

Human Rights Watch highlighted another major criminal justice disparity—although African Americans comprise only 14 percent of the nation’s drug users they account for 37 percent of those arrested for drug offenses.

Black women are not exempt from these disparities. The incarceration of women in America increased 800 percent in recent decades and Black women were disproportionately represented in this shift. They are three times more likely than white women to be incarcerated. Although Black women are 13 percent of the Americas female population they represent 30 percent of all women in prison—approximately two-thirds of them have minor children.

African Americans also receive longer sentences—they are 20 percent more likely to receive prison sentences and 21 percent more likely to receive the mandatory minimum sentence than whites. This has had a systematic and disproportionate impact on the Black community of what is defined as felony disenfranchisement or the loss of the right to vote. In at least eleven states more than ten percent of the African American population is denied the right to vote because of a felony.

Today, one in three Black men will probably go to prison at some point in his life.

America’s mass incarceration, fed by unequal criminal justice, when combined with the other issues of longevity, health, education, unemployment, wage disparities and other general quality of life related issues that include the Black community’s staggering loss of wealth, have a debilitating strangle hold on the community’s ability to progress. Added to this milieu in 2015, was the realty young Black men were nine times more likely than other Americans to be killed by police officers.

From the days when slaves were tarred and feathered or drawn and quartered; through the lynching years of Jim Crow; to the bombing deaths of little girls during the Civil Rights movement; to the current era where young Black men, women and at times children (Tamir Rice) are shot, tased or chocked to death by police and often without just cause—not much has changed. Although the methods of destruction are different, the outcome has remained the same—the lives of Black men, women and children in American at time are still treated with wanton disregard.

The quest for justice and a fair opportunity to create a better life for themselves and their progeny has fused the African American struggle for generations—from the Black Abolitionist Movement to the Black Lives Matter Movement—the torch is passed from generation to generation.

Like the passing of generations, the music of the movement continues to represent and inspire those at the forefront of the effort during for their time. From slaves songs of freedom like “Got on my Travelin’ Shoes”; to the bold expressions of Billie Holiday in “Strange Fruit”; to the soothing tones of the Impressions’ “Keep on Pushing’; to today’s dynamic jazz-hip-hop stylings of Kendrick Lamar’s “Alright”— generations of African Americans continue to sing together, pray together and struggle together for a better tomorrow.