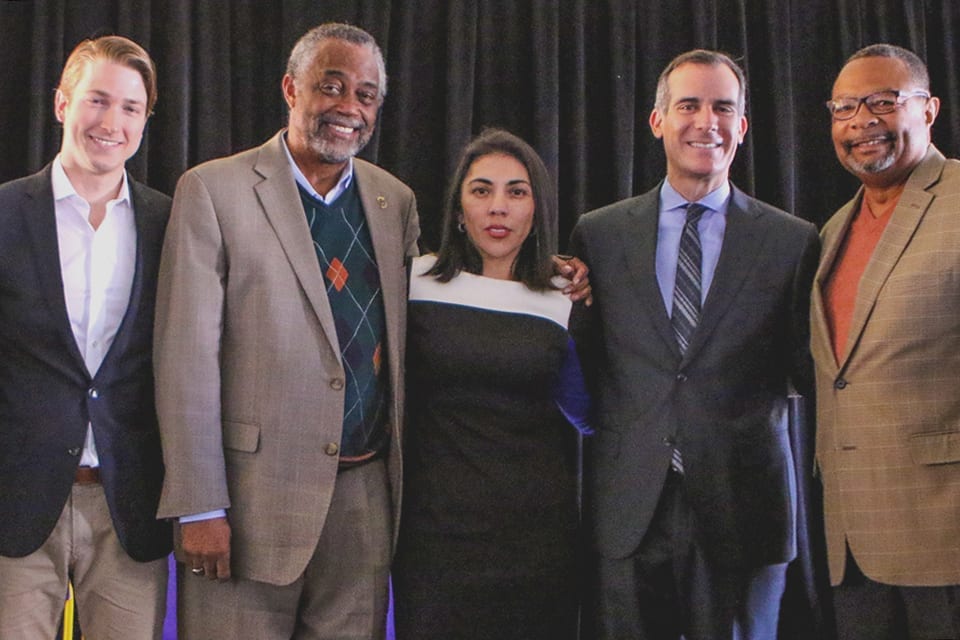 The twinkle in Torry Washington’s eye when he talks about his hopes for the future could be just as bright as headlights as the Jaguar-brand truck the 20-year-old wants to one day purchase.

First though, the Los Angeles resident needs steady income. Washington has had a few jobs in warehouses, but is now out of work and wants a job to build a future on that will help negate any tugs to a sketchy street life.

“My focus is bettering myself,” Washington said. “It’s not really finding a job; its keeping a job. There are a lot of distractions – stuff here and there – but it’s not always about making fast money. I want something safe; something that will make me feel positive about myself.”

So there Washington was on Dec. 2, walking from vendor to vendor, with his mother a few steps behind, introducing himself to perspective employers at the city of Los Angeles’ Fair Chance Hiring Fair at Los Angeles Technical Trade College.

Over 200 job seekers, mostly blacks and Latinos with criminal records, spoke with representatives from over 50 employers and 30 workplace development organizations situated at tables under two large canopies on the trade school’s campus.

“Expanding opportunities to peoples with records is not just good policy – its good business.”

Over 200,000 aforetime incarcerated residents live in the L.A. region on an annual basis, said Anna Bahr, a communications associate with Garcetti’s office. Price, who represents L.A.’s ninth council district, said the hiring fair let those once jailed persons know people do care for them.

“We need to try to expand the workforce,” the South L.A. representative said. “We know that African-Americans are disproportionately affected by the criminal justice system. The formerly incarcerated come out and the statics are 50 percent can’t get a job and if they are African-American it’s even higher.”

Jones-Sawyer said he has seen a lot of people from South L.A., which he represents in Sacramento, released from prison with no work prospects, so he is happy that there are employers willing to employ people that have spent time behind bars.

“For our community to be rebuilt again everyone needs the opportunity to get a job,” said the 59th Assembly District representative, adding that former inmates must have the chance to be productive members of society. “The only way we are going to do that is give everyone a fair chance.”

“Drivers with records have the exact same driving rating as the national average,” Ballard said. “Expanding opportunities to peoples with records is not just good policy – its good business.”

“Having a felony is a huge barrier…So, wherever you go, you’re going to be really limited. It’s going to be a lot of warehouse positions.” –Ray Zacarias

Dwayne Holt, B.M.W.’s owner, said he has two brothers that were in similar positions as many of the event’s employment seekers.

Bahr said more than 320 job interviews took place at the event and there were approximately 100 job offers.

While bouncing from employer to employer, the job-seeking Washington seemed confident he would find a gig. He smiled, pointed at his doting mother and said jokingly, “I’m trying not to live with her anymore.”

Washington continued: “I’m ready to go and do my own thing. Manage to get a car and move out of mom’s house.”

Ray Zacarias, once jailed for armed robbery, now helps parolees find employment and works as the executive vice-president of Communities in Schools. He encouraged the job seekers to not give up on finding a good job.

“Having a felony is a huge barrier,” he said. “So, wherever you go, you’re going to be really limited. It’s going to be a lot of warehouse positions.”

The job fair comes after the L.A. City Council recently passed the Fair Chance initiative banning the checkbox on job applications that asks if applicants have ever been convicted of a felony. Employers will still be able to conduct criminal background checks once a job offer has been made.

Price, a major advocate of the initiative, said, “It’s unfair for someone to do their time, pay their fine and still be penalized by not being able to work.” The councilmember added that sometimes the crimes were committed years ago, and job hunters should have a chance to explain that to hiring businesses.

“Then decide if they are the right person or not,” Price said. “It’s all about working, it’s all about supporting our families and we get to provide examples for our younger citizens about having a good record, a clean record, but also never giving up.”

“If we don’t give people jobs who have served time, guess what?” he said. “They recommit crimes.”McKenzie Jackson
California Black Media