Segregation by the Sea 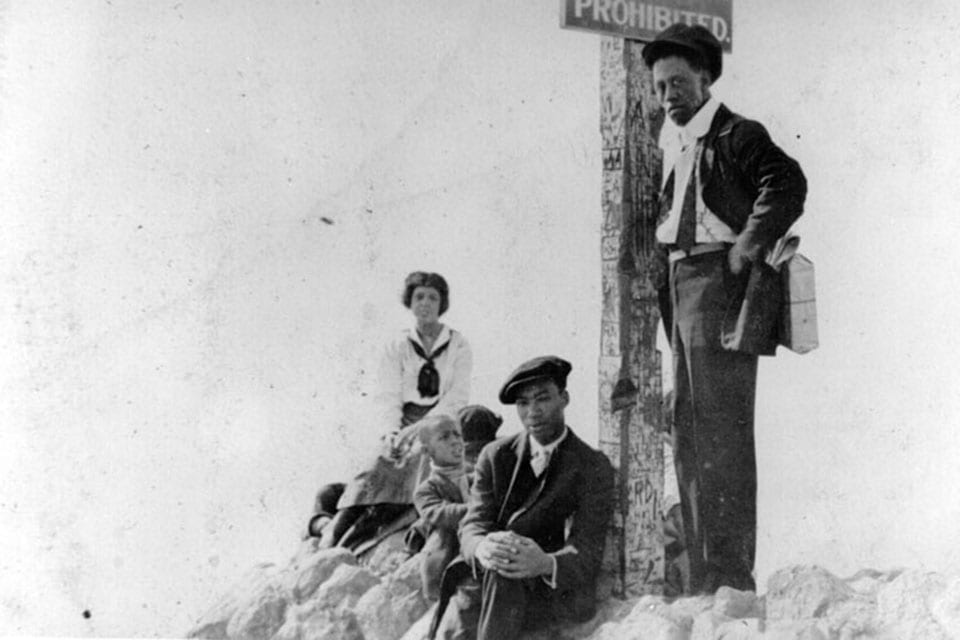 African Americans love California’s warm weather and the ability to play, vacation and/or live along its sparkling coast; but gaining access to the state’s beaches was not always easy for them.

The following article uses an interactive story map to show the locations of each historical site. If you are unable to access the story map, or cannot read it comfortably, continue scrolling down to read the full article on our site.

At the turn of the 20th century, California’s shorelines made the economic transition from casual playgrounds to high-end commodities and in the process ocean access for Blacks and other minorities became more and more restricted. Jim Crow ideology was used to protect and preserve economic opportunities presented by beach front access, resorts and businesses as an exclusive asset for Whites, only.

“There is a powerful tie between African Americans and the water that has both bound them and set them free.” – Eloise Greenfield 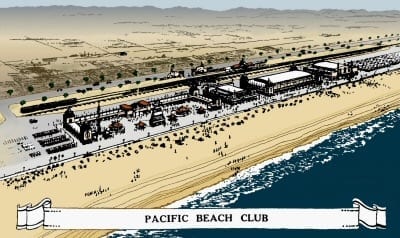 Nowhere was the exclusivity of economic discrimination and access more readily displayed than in regards to Pacific Beach Club of Huntington Beach in the mid 1920’s.

Built along the shores of Huntington Beach, the Pacific Beach Club was designed to accommodate Southern California’s growing Black middle class. Purportedly it was the largest, all Black recreational resort in the United States.

The Club was set on seven acres and included a bathhouse that could accommodate up to 1,500 people, a ballroom, a pavilion and a club house for 2,000. It boasted a restaurant, grocery store, drug store and a 200-unit tent city equipped with water, electricity, and gas. An associate membership cost $50 and a lifetime membership cost $75.

Visitors reached the Pacific Beach Club by driving Pacific Coast Highway or riding the Pacific Electric railway from Los Angeles to Huntington Beach. Once there, they needed to walk nearly a mile to the facility’s entrance.

Although the Pacific Beach Club was expected to be a wonderful achievement for members of the Black community—it faced resistance and set-backs from the beginning. Reports tell of contractors who frequently abandoned the project; while members of the White business community obstructed efforts by club owners to obtain permits, water, and electricity.

Two weeks before the Pacific Beach Club’s grand opening, arsonists burned it to the ground. No arrests were ever made. 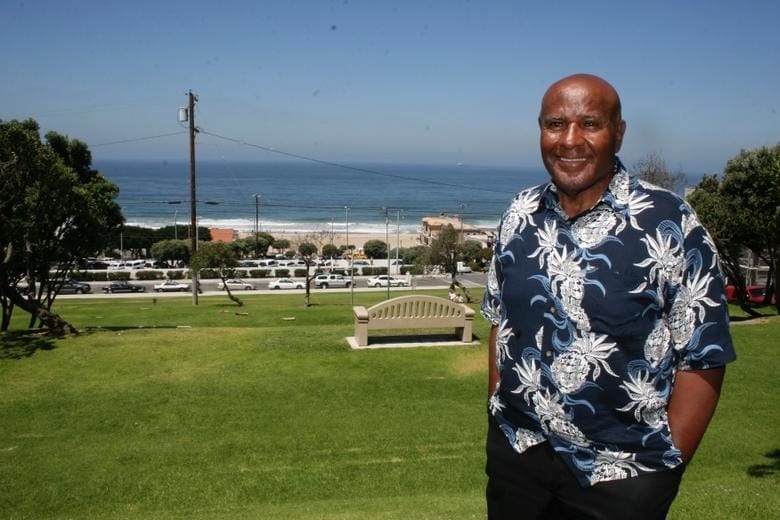 Bernard Bruce, the grandson of the Bruce family who owned Bruce’s Beach resort. Photo courtesy of The City Project.

While Southern California’s Black middle class looked to the exclusivity offered by the idea of the Pacific Beach Club, Blacks in Los Angeles were enjoying the ocean along a two-block section of beach set aside for just that purpose.

When the City of Manhattan Beach was incorporated in 1912, a two-block area along the ocean was set aside for African-Americans. It was during this period that an African-American couple, Charles and Willa Bruce, established a beach resort in the set aside area—the area soon became known as Bruce’s Beach. Over time, Black families bought properties near the resort and built their own summer homes. 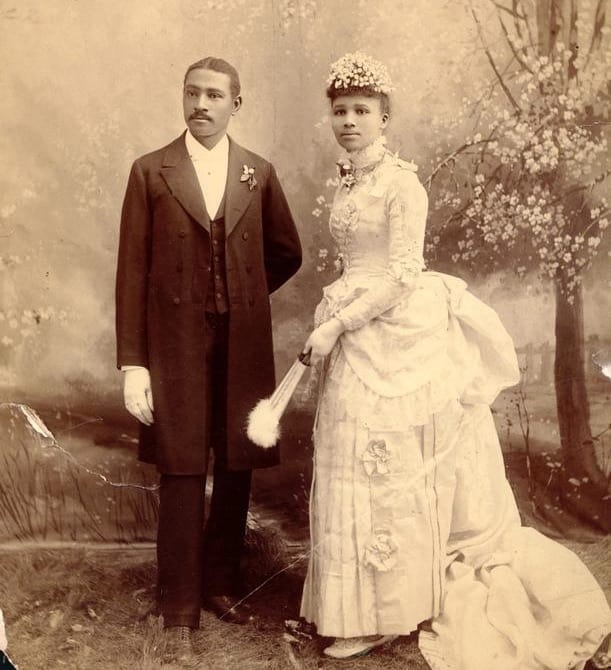 Wedding portrait of Charles Aaron and Willa A. Bruce, the owners of Bruce’s Beach. Photo courtesy of The City Project.

White racists, however, did not want Blacks using the beach or living in the area. They severely harassed not only the Bruces, but casual beach goers, resort visitors and Black homeowners in the area as well. Over time, tensions grew so intense that in the 1920’s, the property was seized by the city under the guise of eminent domain and Bruce’s Beach was closed.

In 1927, the NAACP pushed back and organized a swim-in. Those who participated were arrested, fought the charges and eventually won. In response, the city overturned its condemnation of the beach—it subsequently re-opened without any restrictions. In 2006, a commemorative plaque was placed at the site detailing its origins and history.

Bruce’s Beach was not the only beach in the Los Angeles area opened to Blacks and other minorities during this era—there was also Inkwell or Bay Street Beach (as some called it) in Santa Monica. 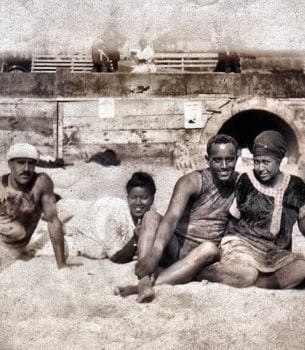 Beachgoers Enjoy the Sand and Surf at the Inkwell, 1928. Photo courtesy of Rick Blocker (blackpast.org).

During the first decade of the twentieth century, African-Americans from Santa Monica and Los Angeles congregated at the beach near the end of Pico Boulevard—they were relatively free to enjoy the shoreline south from Pico to Ocean Park Boulevard.

By the early 1920s, however, when exclusive beach clubs began to rise near the foot of Pico Boulevard, the section of the beachfront that is remembered today as Inkwell was a very limited section of beach (about a quarter of a mile) between Bay and Bicknell streets.

The name Inkwell was ascribed to more than one beach or leisure site around the country that were frequented by Blacks during the Jim Crow era. Santa Monica’s Inkwell Beach continued to be enjoyed by African-American beach goers well into the twentieth century. 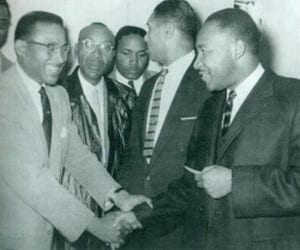 
Black Americans not only found their way to the seashores of Southern California, they also made their way to another beach community to the north.

At the turn of the 20th Century, the coastal community of Seaside was an all White, unincorporated suburb of Monterey. In 1917, as the country entered World War I, the government established Fort Ord as a military training base in the area. However, it was World War II that brought the greatest demographic change to Seaside.

Fort Ord was expanded and experienced an infusion of soldiers, many of whom were black and Filipino—the surge of Black military personnel and their families doubled Seaside’s population. When the United States military was desegregated in 1948, Fort Ord was considered a test case because of its relatively large population of soldiers of color. 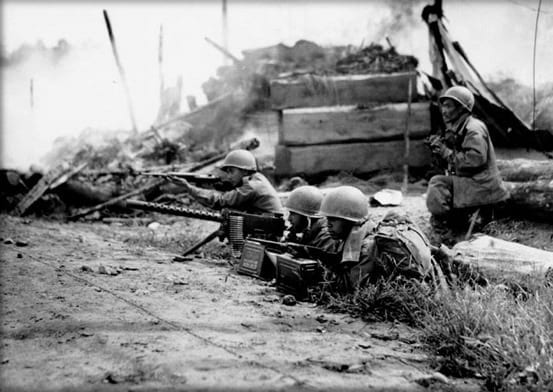 In the era that followed World War II, Blacks formed the largest minority group in the City of Seaside. Thus, it was largely considered a Black city even though Blacks were never a majority of its population.

Access to the coast is important for every American citizen. In the early nineteenth century African-Americans were restricted to small patches of beachfront because of racist policies. Today time, cost, transportation, and even an inability to swim (which can be attributed to centuries of social conditioning) have been cited as limiting factors for visiting the coast. We must work to ensure that all Americans have access to the coast regardless of race or class. Below you will find additional articles that address this topic.