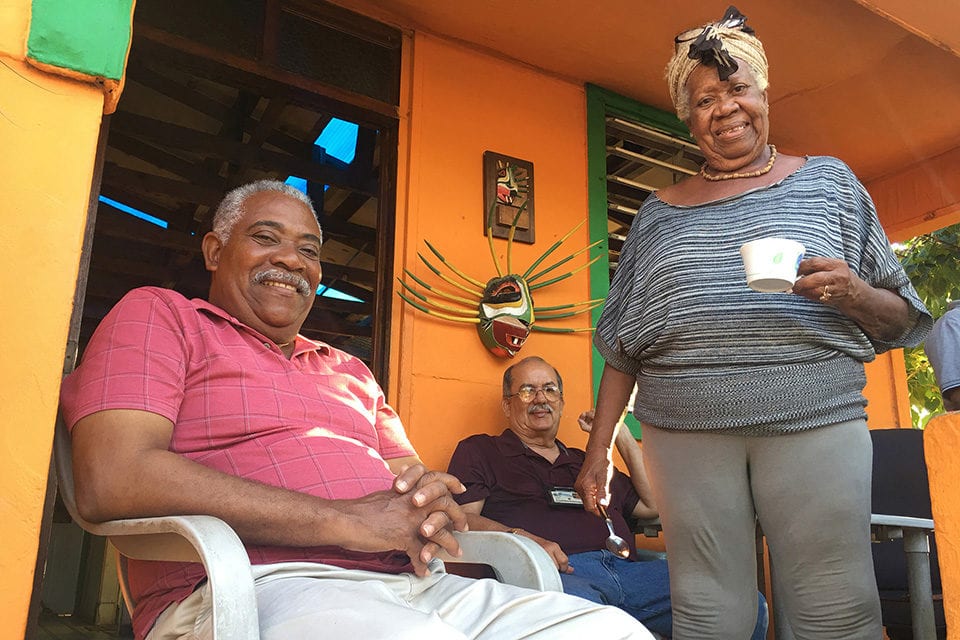 Samuel Lind’s two-story wooden home functions as an art gallery and studio. When he’s at home, visitors can view his overwhelming collection of work, which ranges from colorful cartoonish posters for local festivals, to life-like paintings of Black women, to serious life-sized clay and bronze statues depicting African people and deities. Themes of nature and African heritage fill the walls of the studio—and so does the Puerto Rican flag.

Several of the island’s flags hang visibly and proudly among Lind’s hundreds of paintings, because most of Lind’s work is inspired by his hometown, the small beachside community of Loíza, Puerto Rico.

Loíza is Puerto Rico’s center for African-inspired traditions and it retains one of the largest Black populations on the island; more than 60 percent of its 30,000 residents identify as Black.

“This town is very dynamic in its expressions of its Black roots,” Lind said.

African heritage can be seen all around the town—the music, dance, art and food are all deeply rooted in African tradition.

Known as the “Capital of Traditions,” Loíza is the birthplace of Black Puerto Rican music and is where the dance Plena was born. Bomba music and other African-Taino infused food and traditions are commonplace here. Loíza artisans produce the colorful coconut masks displayed at festivals and make the unique Bomba drums.

“My work identifies with Black people, because that is my reality,” Lind said.

Loíza is the home of the Saint James Festival, which is celebrated in July and depicts the battle Saint James over the Moors. The festival is known for the participation of vejigantes, caricatures of demon or bat-like figures, made of papier-mâché or coconut masks and vibrantly colored dresses, who represent the Moors.

A soft-spoken man, Lind said his art is the instrument that best describes his identity and he purposely depicts African heritage to get display its influence on the island’s culture. A giant 16-foot bronze statue designed by Lind rests in the African section of the Botanical Garden in Caguas. It depicts the Yoruba deity Osain, the god of wild plants, healing and magic, and symbolizes African roots in the island’s culture and identity.

But, he said beyond being Black the people of Loíza are also Puerto Rican.

“The principle is we’re Black, and people here are very clear that they are African descendants,” Lind said. “In the United States, you see Black and White more clearly, but not here.”

Many residents in the town express pride in their African origins as well as their Puerto Rican roots.“Afro-Puerto Ricans have to look at themselves through the context of being Puerto Rican, because we are not straight up African,” said Maricruz Rivera Clemente, founder of the Pinones Integration Corp. Clemente founded the organization in 1999 to bring awareness to social issues affecting the island’s Black communities. “ people understand that some aspects of our heritage are Black, but some people choose to deny it.”

Rivera Clemente continued: “We are working to educate people about ‘our blackness,’ but not just that we are African, but also about,” our Puerto Rican heritage.

Raul Ayala runs the family’s famous yellow souvenir shops, known for its vejigantes, the colorful coconut mask worn in festivals; His father opened the shop in 1959.

“Only Puerto Rico has Bomba and the town of Loíza kept it alive,” said Ayala, adding that years of separation from the rest of the island allowed Loíza to maintain its unique culture.

Ayala said that the more developed neighboring city of Carolina was like Loíza, until local investment and development changed the town.

“Different types of people moved in and changed the composition of the town,” said Ayala.

Loíza only recently became easily accessible to the rest of the island. Before a highway was built in 1970 to connect the historic tropical town to neighboring cities across the Río Grande de Loíza, it could only be accessed by ferry.

This separation helped the town maintain its cultural roots, but also cut it off from development. Loíza gets its name from a Taino female chief, Yuiza, who chose the name “Luisa” after being baptized by the Spaniards. It began as a place to harbor escaped slaves from Puerto Rico and all over the Caribbean. But, despite its rich culture, Loíza is one of the most impoverished parts of Puerto Rico.Only 20 minutes east of the capital San Juan, Loíza is often overlooked as a tourist destination, even though resorts lie 5-10 minutes east of the river in Rio Grande.

“That’s not a coincidence,” said Mara Clemente, a Loíza resident. “People in Loíza don’t put their address on job applications; they say they are from Carolina or Rio Grande.”

She said that, because of its large Black population and bureaucratic racism, Loíza has been left out of the island’s development compared to neighboring towns on the island. Nearly 50 percent of the residents in Loíza live under the poverty line and the town’s unemployment rate is almost triple the national average.

“What makes Loíza any different from any other Black ghetto?” Clemente asked. “Africans all over the world must reach out to each other to change this.”

Clemente said that she often feels alienated for her bold views on race.

“I am not an Afro-Puerto Rican,” she said. “I am an African in Puerto Rico.”

She hopes to create a Pan-African library in the town.

Some residents report negative stereotypes about Loíza, often referred to as “that Black town,” because of its high crime rate, while others contend that race relations on the island are improving.

“Racism is not bad here, but we are conscious of race; some people are racists, but some are not,” said Carmelo J. Carrasquill, 17, who identifies himself as Black. “Race is important, but we don’t care about that as much, because we are all Puerto Rican.”Tatyana Hopkins is a staff writer for the Washington Informer, who recently traveled to Puerto Rico to report on the hurricane recovery efforts for the NNPA Newswire and BlackPressUSA.com. You can follow Tatyana Twitter @tat_hopkins.