Getting The Spirit in the Dark: How a Discussion around Celebrating the Life of Aretha Franklin Reveals the Changing Face of Blackness in America—Part 1 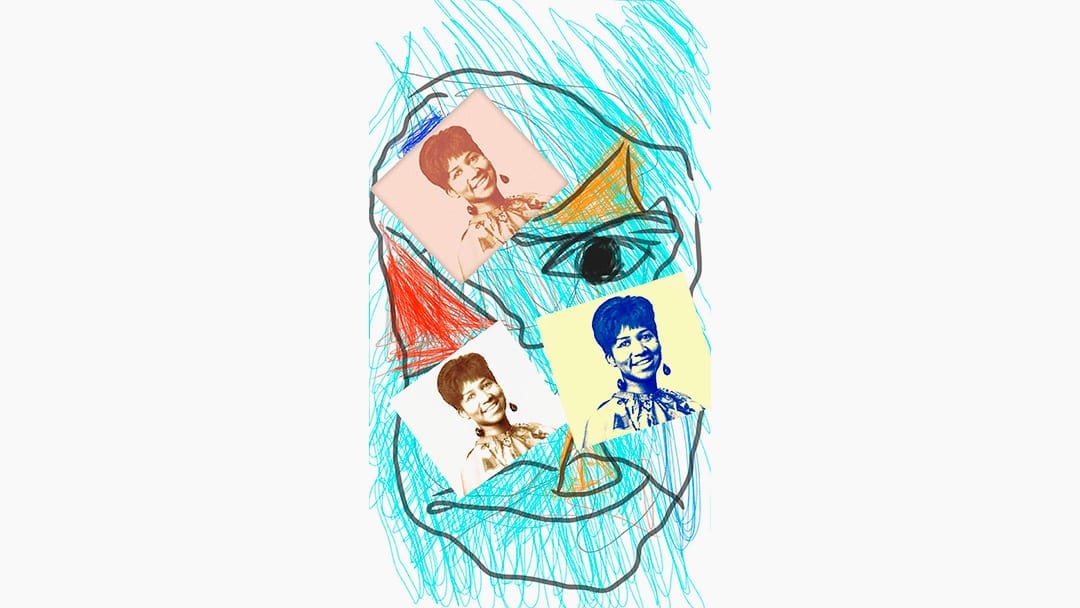 On August 16, 2018, we got the news we were expecting but nonetheless, weren’t ready to hear—Aretha Louise Franklin had gone home.

She had been on her sick bed for many days and when call for “the watch” came, we all took note and kept an eye and ear out. She was and is a great one, so the watch was marked in particular ways, in conversation and in song; in remembrances sweet, and for some of us, summer-tinged.

At news of her death, the expressions of grief were immediate, and we nodded in satisfaction as her praises began to be sung.

No one with any idea of the cultural importance of Black Music, American Music, can deny the impact of the Queen of Soul on the world. In recognition of her great gifts Aretha Franklin was, for most of her life, a touchstone of Black American culture and therefore world culture. Her catalog orchestrating, punctuating, and exclaiming the unique experience of a people. She sang the experience of survivors, the descendants of slaves.

In all the accolades and in all the praises, few will properly marvel at the alchemy, the Black people magic that turned all that pain and all that struggle into redemption, how sometimes, rarely, monumental talent turns the descendants of slaves into royalty.

For centuries to be Black in America meant to be in turn an indentured servant, a slave, a descendant of slaves and slave masters and the indigenous people of this place. Or a free person of color with kinship ties to one, all or some of these groups. A people whose DNA is a testament to its real history, the virtual embodiment of the cultural mélange of this country, the truth in the gumbo. 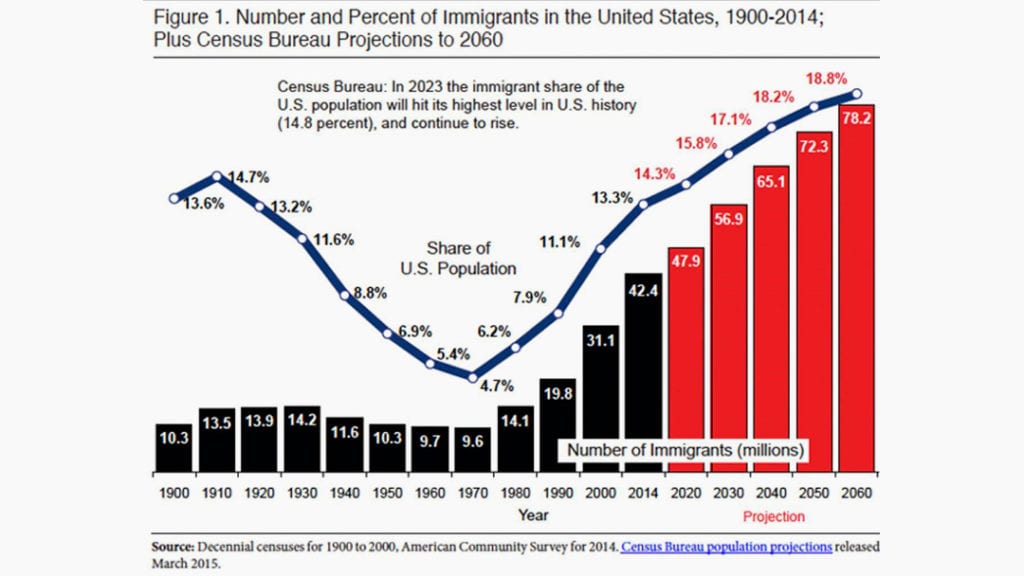 Prior to 1960, the majority of immigrants to America were from Western Europe. It wasn’t until the late 1960’s with the passage of the 1965 Hart/Cellar Immigration and Naturalization Act, that the definition of who is even allowed to become American began to shift, along with it the idea of Black American-ness.

Reportedly in a nod to inclusion following the Civil Rights struggles of the 1960’s, Hart/Cellar repealed the racist quota system established by the 1924 Johnson Reed Act, which heavily favored northern Europeans and sought to restrict immigration from southern and eastern Europe on the premise that such immigrants were inferior to immigrants from western and northern Europe.

While there had always been a miniscule amount of Black immigration to America, Once Hart/Cellar became the law of the land there began a large influx of Black people from throughout the diaspora into the country, changing the cultural dynamics of Black America forever.

Into this fraught backdrop stumbled Luvvie Ajayi. Ajayi, AKA Awesomely Luvvie, is a Nigerian American internet personality and author. Ajayi has lived in America since she was nine. During a discussion regarding who should perform during a tribute to Aretha Franklin, Ajayi scoffed at the idea of 90’s vocal sensation Tevin Campbell performing: 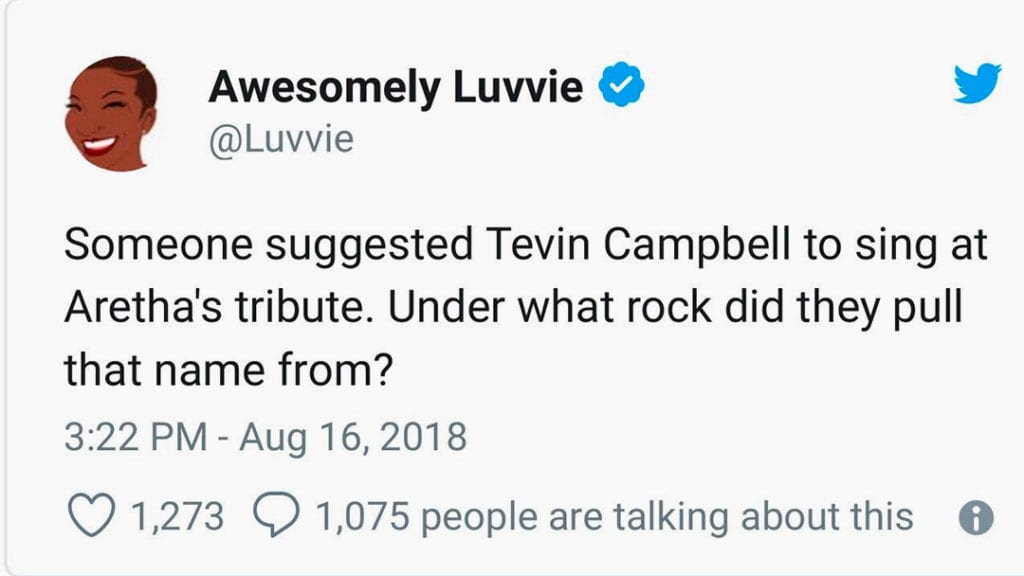 The response to her disregard was immediate, corrective and rather informative. Luvvie no doubt is still smoking from the drag marks Black Twitter inflicted on her: 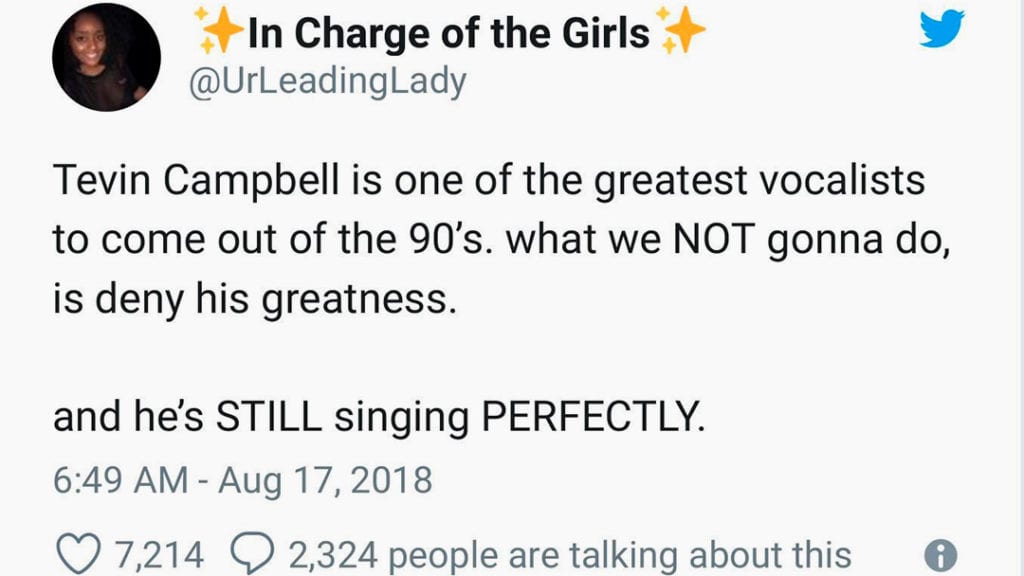 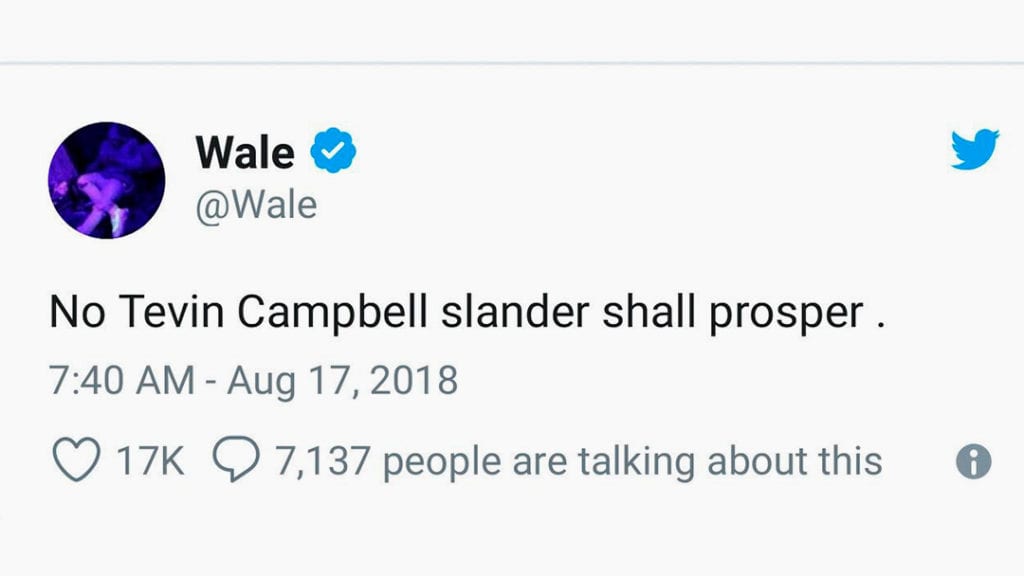 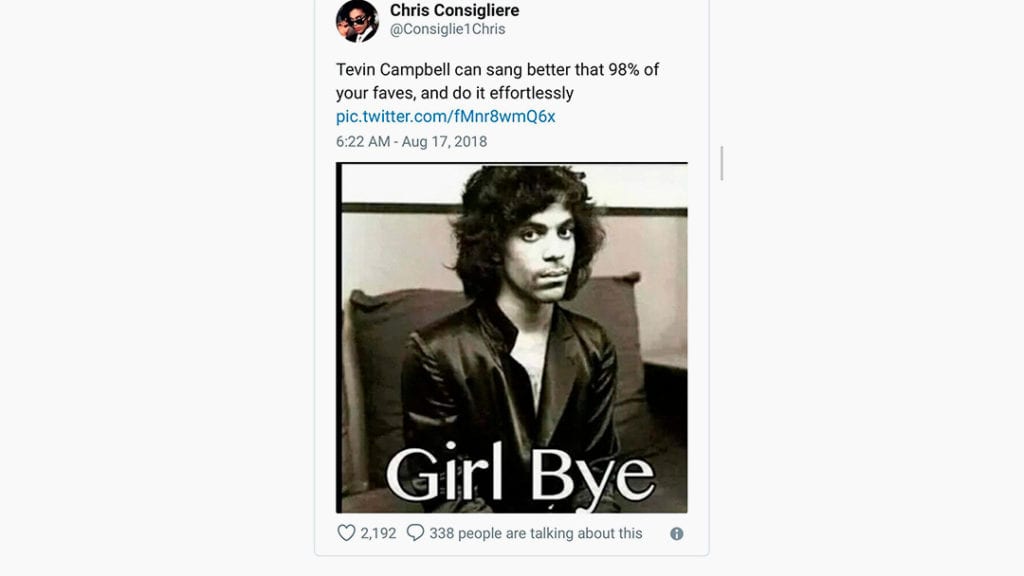 Most interestingly, many questioned Ajayi’s right to comment on the culture at all. No stranger to previous problematic examples of her take on native Black Americans, Ajayi has sparked a long overdue debate about who has the right to speak for a culture in the midst of great change: 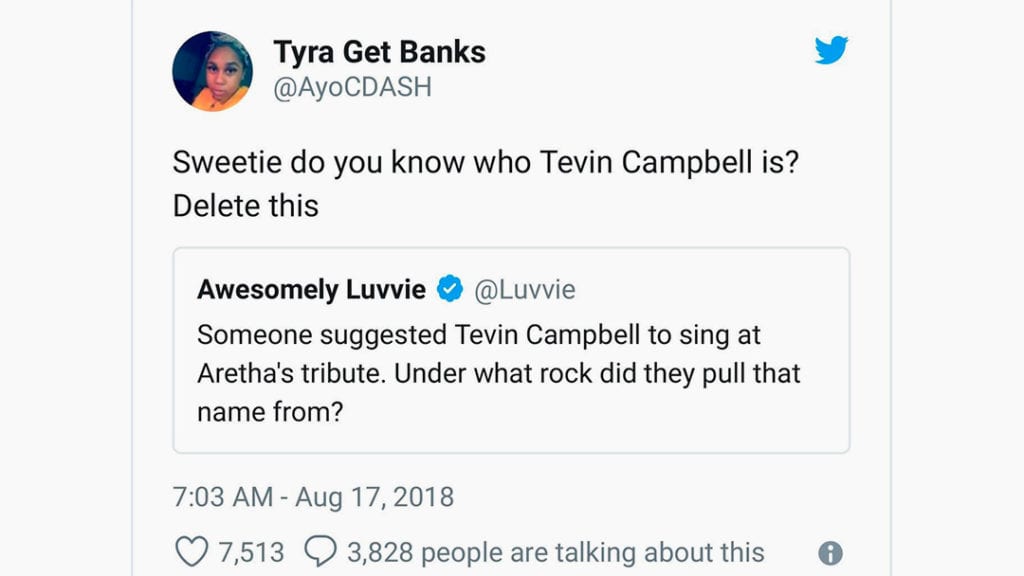 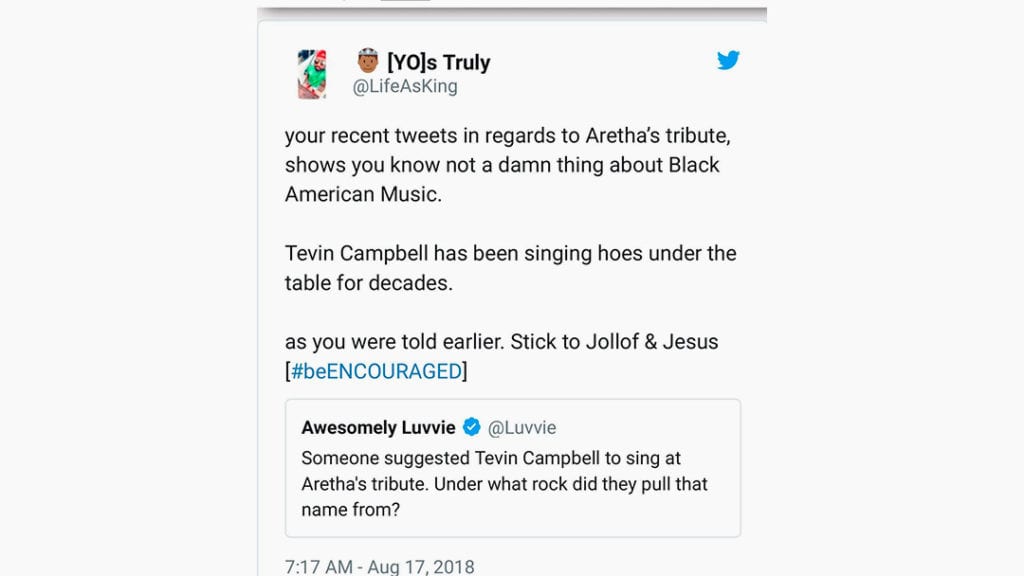 Luvvie Ajayi’s comments caused Tevin Campbell to trend on Twitter and scared a few of his fans. For her part, Ajayi backpedaled: 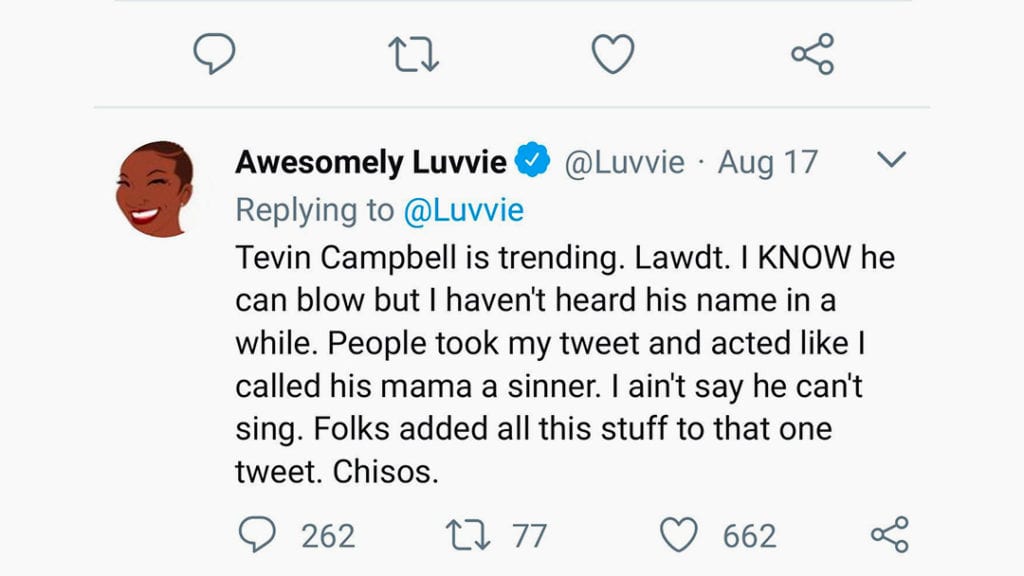 All this may seem fairly unimportant perhaps even petty, but it is a stand in for something else. Ajayi’s comments have spawned much discussion and exposed the seams of a Black community in temporal, cultural and numeric flux and in need of discussion, reflection and redefinition of itself–or selves–during these challenging and changing times. 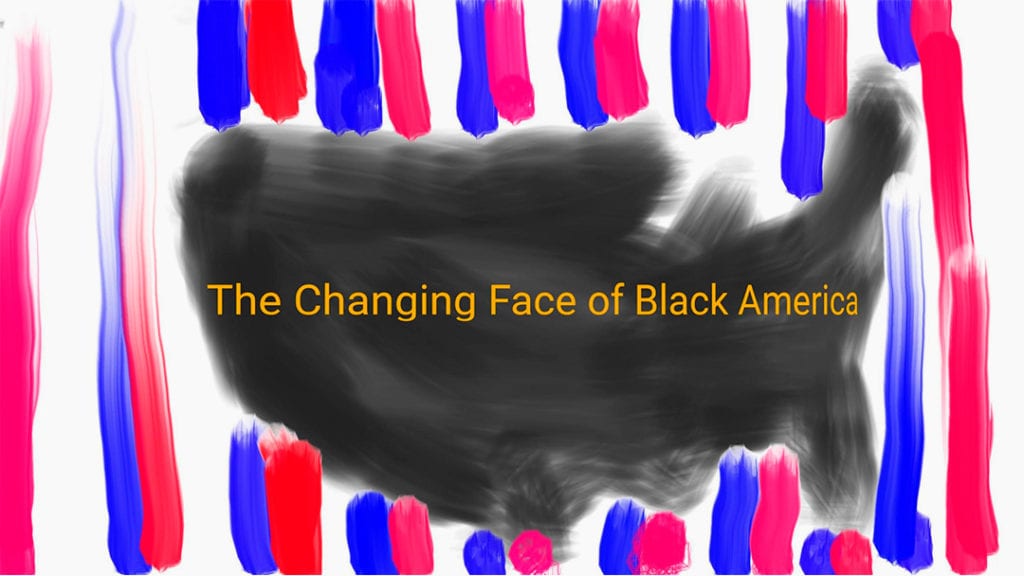 Since the 1960’s, following the dismantling of the Johnson/Reed quota system, the United States Black population has Increasingly diversified.

2019 will mark an important if little discussed anniversary in United States history, it will be 400 years since Angela, a Christian woman born in Angola, Africa became the first Black person subjugated under a developing system of chattel slavery in what would eventually become the United States.

In the almost four hundred years since Angela’s monumental journey and enslavement, those of us who came afterward have not fully come to terms with the world-changing consequences set into motion by the simple act of an African woman stepping foot on to the soil of Jamestown, Virginia.

The enormous wealth created by chattel slavery would eventually establish the processes and produce the raw materials which fueled the Industrial Revolution and thus the explosion of change used to ignite the prosperity and conflict of the modern world.

In 1860 at the opening of the Civil War, there were 3,950,528 slaves in the country along with 476,748 Free Persons of color. By the 1870 census, the first postbellum enumeration, that number was 4,880,009 for both groups. These survivors are the progenitors of today’s native-born Black populations, the descendants of slaves. 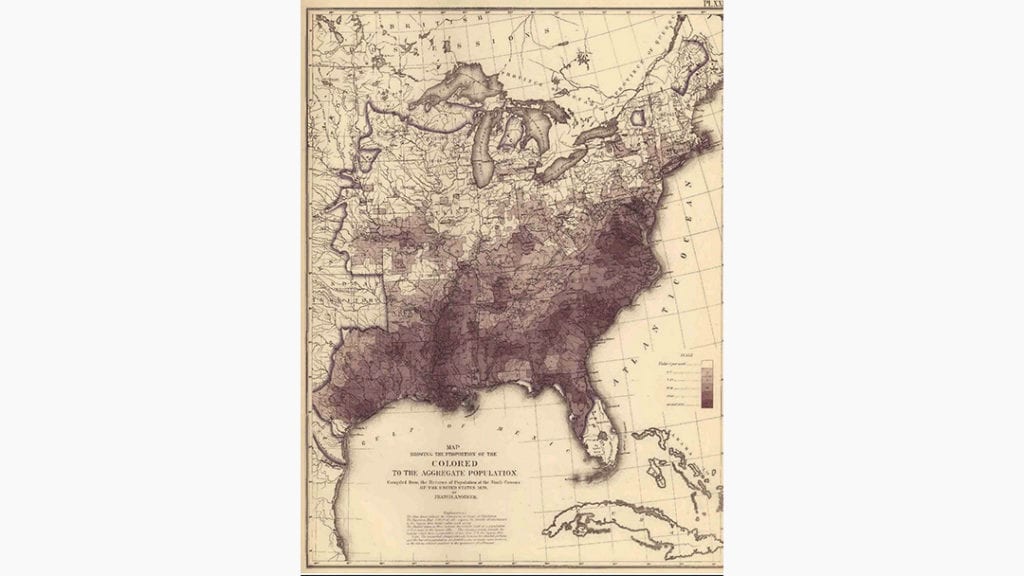 (Courtesy of the U.S. Census Bureau)

Throughout most of the history of the United States, immigration occurred in a series of spasms. Before 1892, individual states had their own immigration policies. After the opening of Ellis Island, immigration policy fell under the purview of the federal government, which first stepped in to limit entry into the country with the Chinese Exclusion Act of 1892.

From the creation of the Chinese Exclusion Act, which sought to limit the influx of Asian immigrants through the 1924 Johnson/Reed Act which established a strict quota system, United States federal immigration policy sought to encourage as well as maintain, the ideal and reality of a largely Northern European character to the nation. Even to the point of excluding immigrants from southern and eastern Europe who were considered inferior to those from Northern Europe.

These policies gave rise to the myth of the great American chiaroscuro, the never true binary of America in solely Black (the descendants of slaves who were to whatever degree tolerated—where else would they go) and White (largely—some 70 percent—from Northern Europe).

With the Civil Rights victories of the 1960’s the United States immigration priorities shifted again. This time in the opposite direction. As a part of the great society legislation, framed as a matter of social justice, perhaps as a contra-punto to the Civil Rights legislation which gave legal protections to Black Americans, the Hart/Cellar Act was signed.

Hart/Cellar repealed the quota system put in place by the Johnson/Reed Act, this would have a dramatic and explosive effect on the overall immigrant population and dramatically reshape what it means to be Black in America. 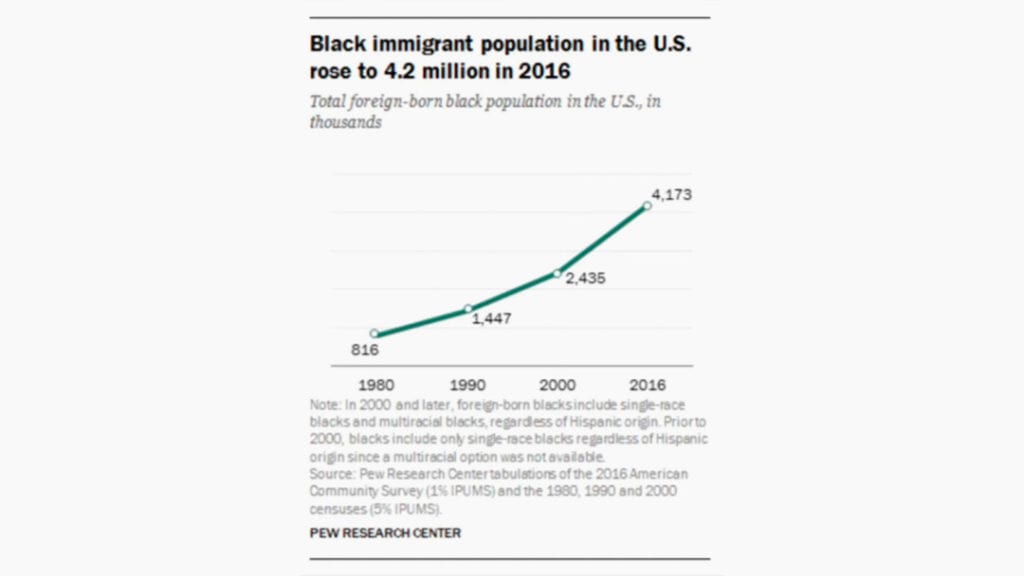 In 2019 when Angela’s anniversary takes place, when we commemorate 400 years of survival—a  record number of Black people living in America will not be the descendants of the Black people who labored under the abuses of North American slavery.

Ira Berlin, author of the book Many Thousands Gone winner of the Bancroft Prize, in a 2010 article adapted for the Smithsonian Magazine noted that after a lecture on the emancipation proclamation he stopped to discuss the topic with a group of Black students:

Once I was drawn into their discussion, I was surprised to learn that no one in the group was descended from anyone who had been freed by the proclamation or any other Civil War measure. Two had been born in Haiti, one in Jamaica, one in Britain, two in Ghana, and one, I believe, in Somalia. Others may have been the children of immigrants. While they seemed impressed—but not surprised—that slaves had played a part in breaking their own chains and were interested in the events that had brought Lincoln to his decision during the summer of 1862, they insisted it had nothing to do with them. Simply put, it was not their history.

Although these students are the descendants of those who have fled the impacts and effects of slavery (in the case of Haiti and Jamaica) and colonialism (in the case of Ghana and Somalia) these histories are complex as well as different from the history of slavery in the United States of America.

Traditional Black America was forged in the crucible of a particular brand of slavery, from this furnace came something new. An amalgamation of the various threads of ethnic and (racial) identity.

Black America became one people as a product of a shared history of struggle, torment, love and survival against the odds in a place dearly loved but not as loving in return. This identity has been rapidly changing and what the New Black America will become is being shaped now. It’s time to discuss with one another what that will mean for a people whose very identity was created by a history which still hasn’t been reconciled.

Watch for part 3 of Getting The Spirit in the Dark: How a Discussion around Celebrating the Life of Aretha Franklin Reveals the Changing Face of Blackness in America in the coming weeks.