From Attica to the New Jim Crow Ending Slavery Behind Bars 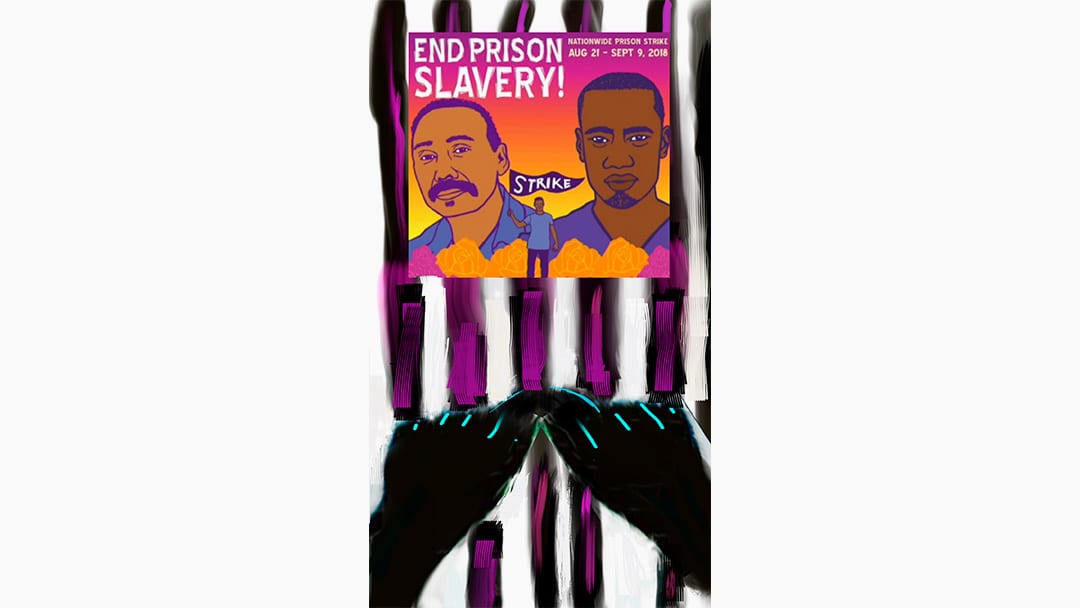 If reporting by cable news stations is your only exposure to what’s happening in the world then you may discover someday, that you have been left woefully under informed.  Gil Scott Heron was correct when he predicted that “…the revolution will not be televised…”

From August 21, through September 9, 2018 one of the largest prison-strikes in the history of this nation took place and you’d never know it had happened at all—judging by the coverage it received on the major cable news shows.

Even now, some might ask why should we care about what happens behind the walls of our nation’s penal institutions? Why should the violence and death which go on in prison outside of public view matter to us at all?

The answer must be that what happens to the “…least of these…” is the true barometer of where a people’s moral compass lay, and until there is perfect justice we must be concerned with how we treat those we choose to incarcerate. There is no separate body of the people, what we choose to do to one another, remains available to be done to us. What happens to one of us (Kalief Browder) is everyone’s business. 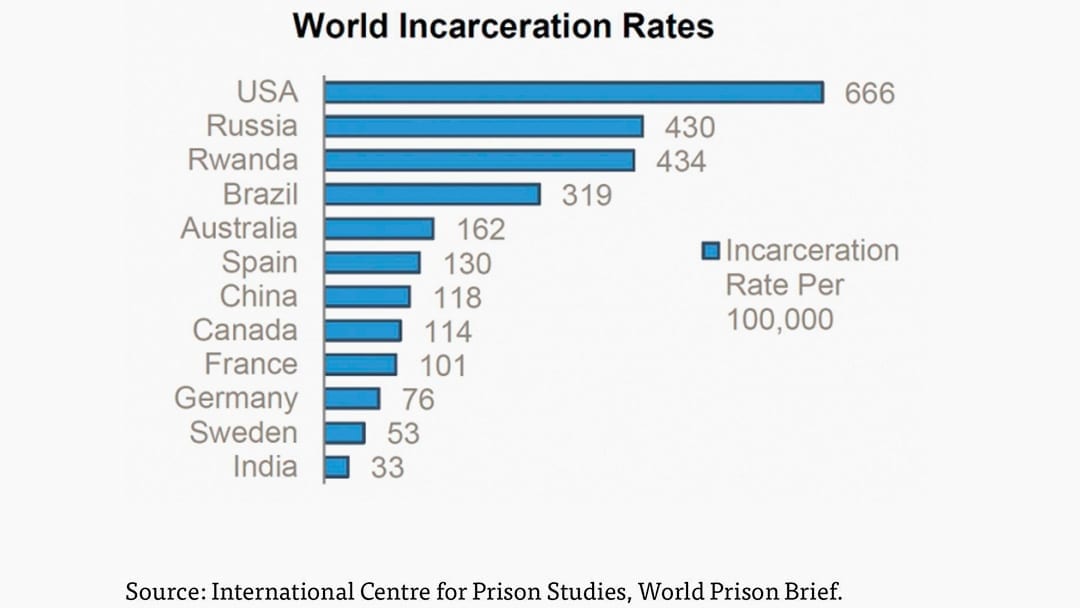 The clear majority of whom are Black and Brown people. 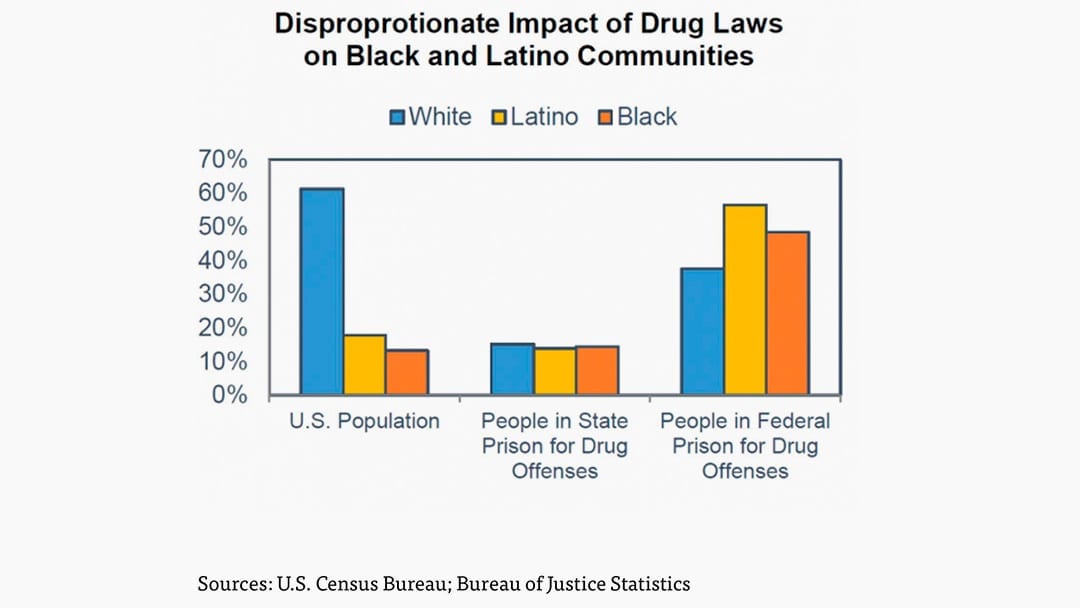 This mass incarceration wasn’t always the case. Before the 1960’s and the regime of for-profit prisons Black people made up a very small portion of the incarcerated. 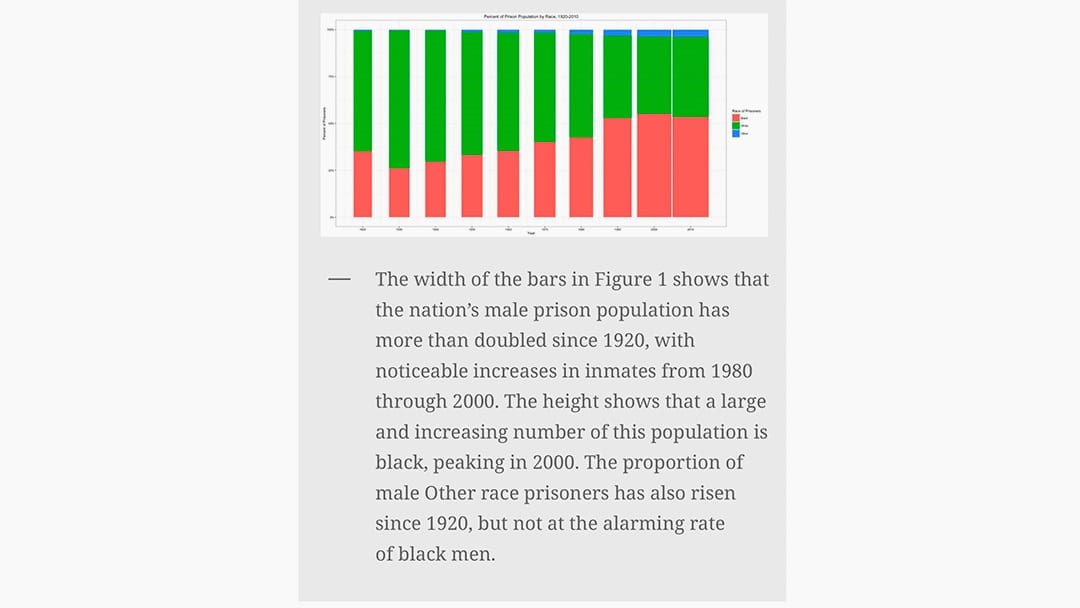 Courtesy of Dartmouth University: Race, Segregation and Incarceration in the States: 1920-2010

It would take the Nixon administration’s War on Drugs as well as the incentives of the for-profit prison system to create the turmoil in Black communities that we live with today. In her acclaimed book The New Jim Crow: Mass Incarceration in the Age of Colorblindness Michelle Alexander stated:

“In light of the devastation wrought by crack cocaine and the drug war, and the odd coincidence that an illegal drug crisis suddenly appeared in the Black community—after, not before a drug war had been declared. In fact, the war on drugs began when drug use was on the decline. During this same time-period however a war was declared, causing arrests and convictions for drug offenses to skyrocket especially among people of color.”

That this increase incarceration has had devastating consequences cannot be disputed. Michelle Alexander in discussing how she came to the core ideas thesis or reasoning behind her book stated:

“The smattering of lawyers and advocates around the country were beginning to connect the dots between our current system of mass incarceration and early forms of social control.  Quite belatedly, I came to see that mass incarceration in the United States had, in fact, emerged as a stunningly comprehensive well disguised form of racialized social control that functions in a manner strikingly similarly to Jim Crow.”

Slavery in the Land of the Free

For nineteen days from August 21, through September 9, 2018, men and women in prisons across the United States demanded an end to prison slavery, the only kind of involuntary servitude or slavery still allowed under the thirteenth amendment of the United States Constitution:

“Neither slavery nor involuntary servitude, except as a punishment for crime whereof the party shall have been duly convicted, shall exist within the United States, or any place subject to their jurisdiction.”

It is an anachronism that in a land whose self-image is so completely wrapped in the packaging of individual choice and individual freedom that slavery remains an integral part of the system. For example, due to climate change California’s wildfire season is year-long, many of those fires are being fought with the use of prison labor, who do these dangerous jobs for as little as $1 hour plus $2 a day.

Prisoners are also fighting for the restoration of voting rights to accomplish prison reform.  According to the Drug Policy Alliance one in thirteen Black people are denied the right to vote because of laws which disenfranchise people with felony convictions. 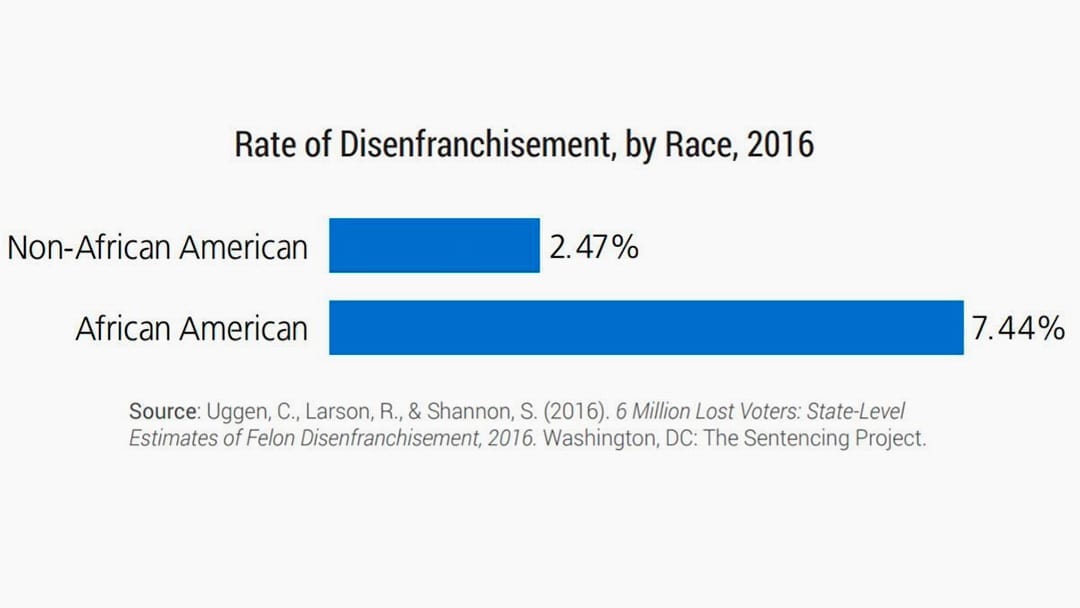 Michelle Alexander speaks on how the evolving processes of institutional oppression shift but maintain the same outcomes:

“The arguments and rationalizations that have been trotted out in support of racial exclusion and discrimination in its various forms have changed and evolved but the outcome has remained largely the same. An extraordinary percentage of Black men in the United States are legally barred from voting today, just as they have been throughout most of American history. They are also subject to legalized discrimination in employment, housing, education, public benefits and jury service just as their parents, grandparents and great grandparents were.”

The historic prison strike and call for action was in large part a response to the deadly violence which occurred at the Lee Correctional Institution in South Carolina on April 15, 2018. The violence at Lee Correctional Institution was called “the deadliest incident of violence to take place in a United States prison in a quarter of a century.”  This after South Carolina officials cut funding for essential programs such as mental health, rehabilitation, as well as other programs and slashed staffing requirements.

The resulting rioting left seven prisoners cut to death, after prison officials made no attempt to intervene in the chaos until hours after the melee began on that April day.  According to an article in USA Today entitled “Bloodied bodies stacked in a prison yard: What happens when states slash prison spending”

“The riot at Lee Correctional Institution, a 1,785-bed prison in rural South Carolina, is part of an uptick in violence in prisons nationwide that has killed and injured inmates and guards alike and cost taxpayers millions of dollars in settlements. Across the country, states slashed prison spending by more than $200 million between 2010 and 2015. Meanwhile, violence appears to be on the rise, according to a USA TODAY review of public records, lawsuits, academic studies and news reports.”

The strikes organizers issued a list of ten demands: 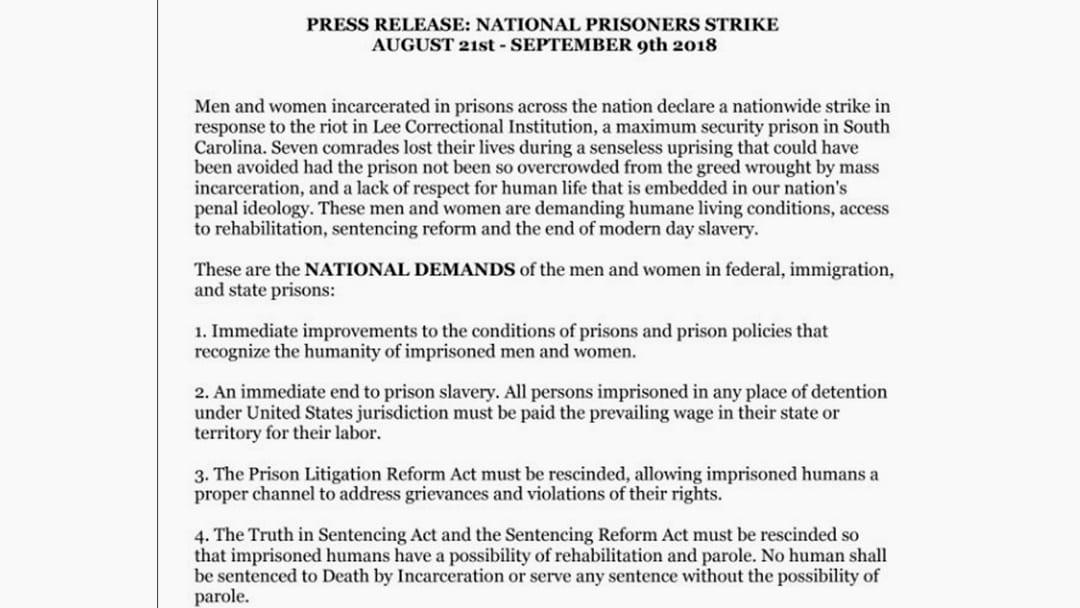 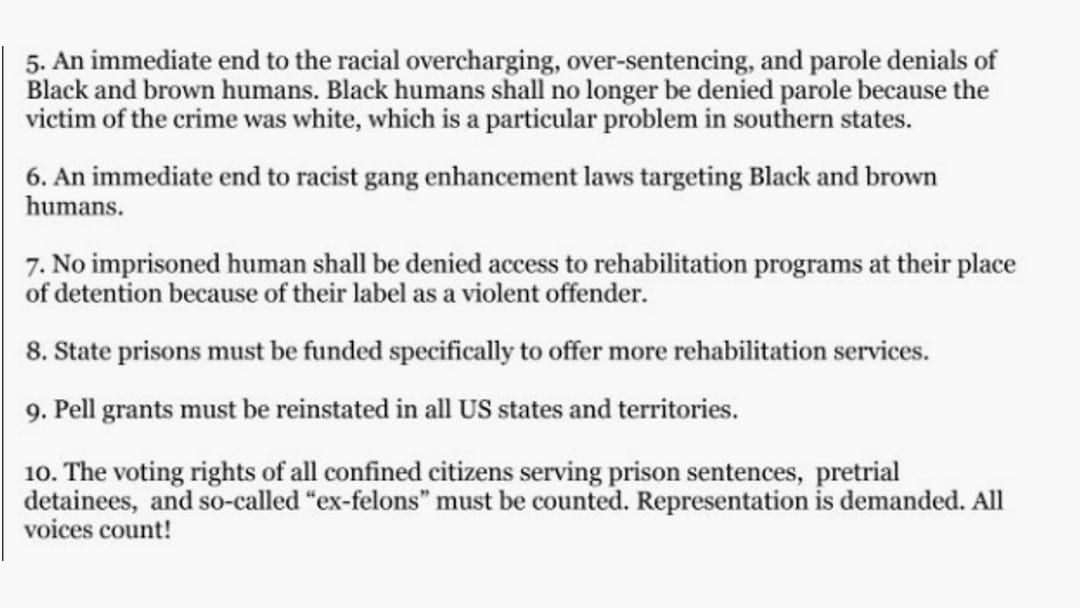 The 2018 prison strike was dated to coincide with the Attica uprising, one of the deadliest incidents of prison violence in American history.  The continuing need to address these issues reminds us we must continue to fight for criminal justice reform.  Our communities and far too often the people we love, are affected and effected by our nation’s justice system and none of us can be free until justice is for more than just us.