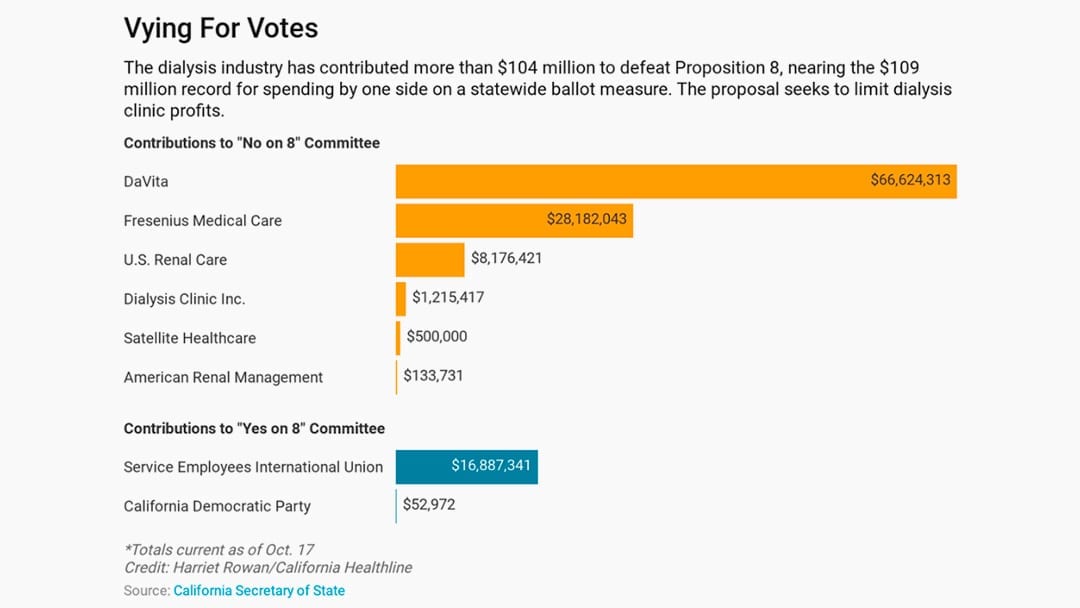 With the midterm election less than three weeks away, the dialysis industry has made Proposition 8 the most expensive on the ballot this year.

By the time Nov. 6 rolls around, the industry may also break the record for spending by one side on a statewide ballot measure.

As of Oct. 17, dialysis companies have contributed more than $104 million to the “Vote No on 8” committee,which is encouraging voters to reject the union-backed measure to limit dialysis company profits. Industry giants DaVita and Fresenius Medical Care, which operate nearly three-quarters of the chronic dialysis clinics in California, are responsible for more than 90 percent of that total.

The $104 million figure comes to about $1,500 for each of the roughly 66,000 dialysis patients in California who the industry warns could be harmed by the measure.

“When you see this much money in play, it indicates there’s a lot of money at stake,” said Kati Phillips, spokeswoman for California Common Cause, a nonprofit organization that calls for tighter campaign finance limits. She warned that this level of spending can discourage voters, because “they can feel their voices being drowned out by wealthy special interests.”

Proposition 8, or the “Fair Pricing for Dialysis Act,” would cap dialysis clinic profits at 115 percent of the costs of patient care, with revenue above that amount to be rebated primarily to insurers. Medicare and other government programs, which pay significantly lower prices for dialysis, would not receive rebates.

The Service Employees International Union-United Healthcare Workers West, which represents more than 95,000 health care workers in California, sponsored the measure and is funding the “Yes on 8” committee.

SEIU has spent more than $16 million on the proposition, which means the union is being outspent 6-to-1. That’s the most the union has ever spent on a California ballot measure, said Sean Wherley, a spokesman for the union.

The pharmaceutical industry currently holds the record for spending by one side of a ballot measure since 2001, the earliest year for which data are available online, according to MapLight, a nonprofit that tracks money in politics. In 2016, the industry contributed more than $109 million to defeat Proposition 61, which would have prohibited state agencies from paying more for medicines than prices negotiated by the U.S. Department of Veterans Affairs. The measure failed.

The money for the “No on 8” campaign has primarily come in large installments from the biggest for-profit dialysis companies in the country, which are concerned that this measure would harm their bottom line.

In television, radio and online advertisements airing around the state, the “No on 8” campaign warns that its passage could lead to “hundreds of millions in higher health care costs” and that dialysis companies might close some of their clinics in response.

Supporters of the measure argue in one of their TV ads that “dialysis corporations make a killing” and that limiting what dialysis clinics charge insurance companies could bring down health care costs across the board.

Most of the money raised by both sides is being poured into ads that are playing on heavy rotation around the state.

While the money for the “No on 8” campaign has come exclusively from the dialysis industry, many organizations also oppose the measure, including the California Medical Association, the American Nurses Association and the California Chamber of Commerce.

The “Yes on 8” campaign is funded almost exclusively by SEIU, but the California Democratic Party contributed more than $50,000. Other groups that support the measure include the California Alliance for Retired Americans, California’s public employee benefits and retirement system (CalPERS) and various labor groups.