Black Legacy and Institutional Memory: Who Should be In-Charge of Keeping, Defining and Transmitting the History of Our Cultural Contributions? 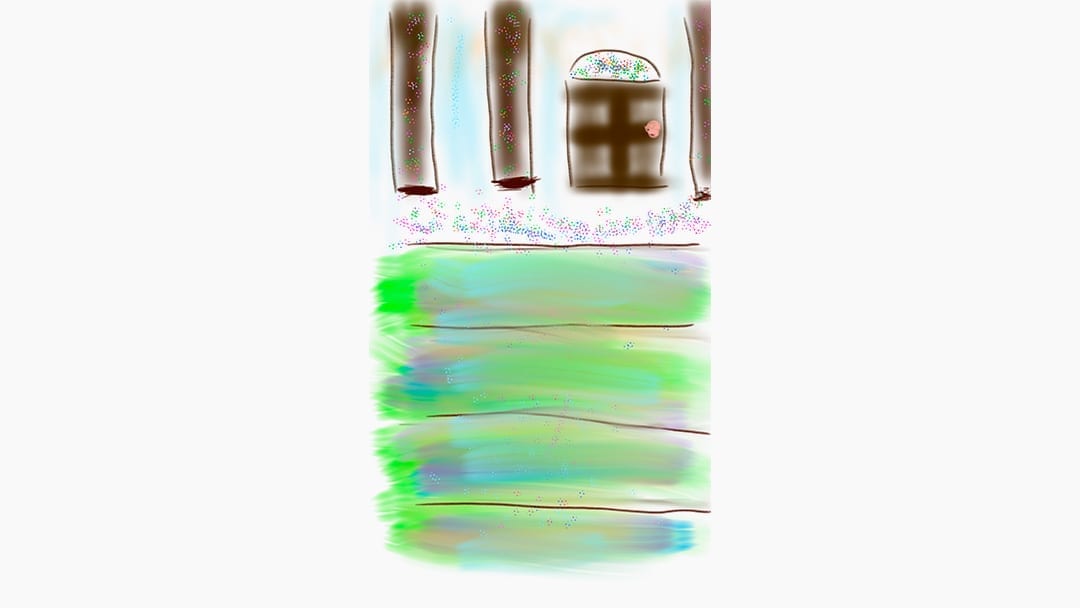 At the end of the year it is customary in most cultures to look back at some of the year’s most interesting challenges and to contemplate the lessons learned and the way forward.

In that tradition let’s shift focus to an occurrence which began earlier this year, in the spring.  On March 27, 2018, the Brooklyn Museum in Brooklyn, NY announced the appointment of two new curators for two of its most important collections—Kirsten Windmuller-Luna, appointed the Sills Family Consulting Curator of African Art; and Drew Sawyer appointed the Phillip Leonian and Edith Rosenbaum Leonian Curator of Photography—both new curators are white.

Once announced, the backlash to their appointments, especially Windmuller-Luna’s, was hot and immediate: 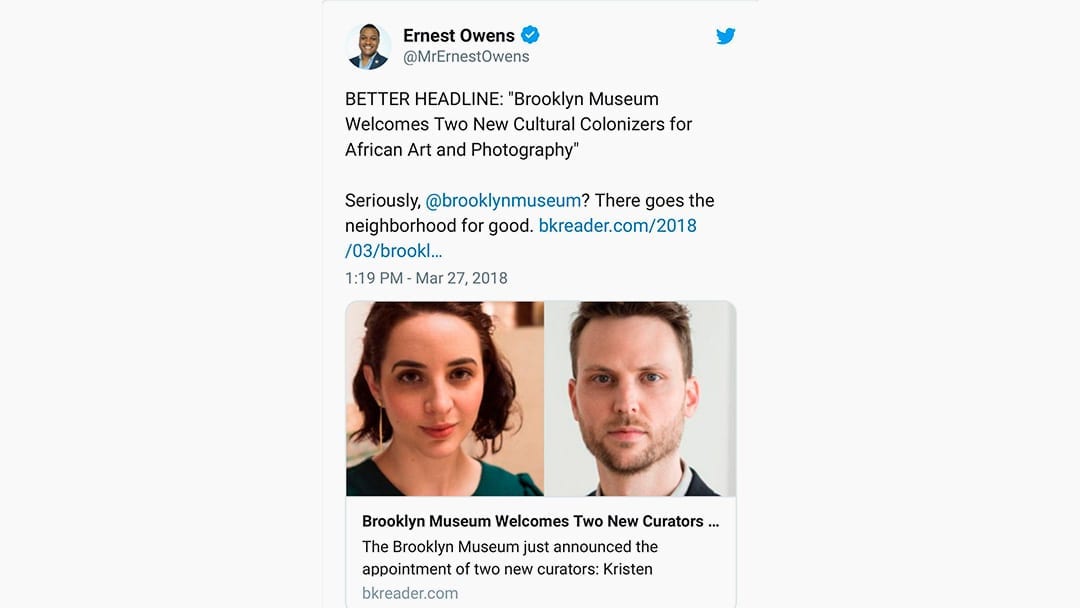 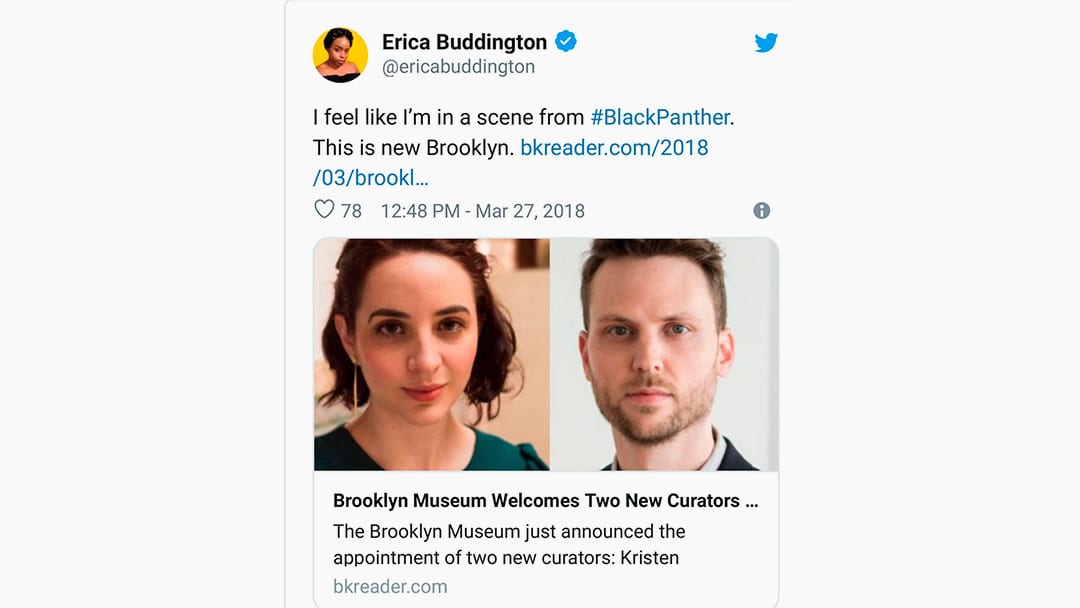 The scene from Black Panther being referenced is the one in which Killmonger, tough guy and anti-hero, confronts a white female museum curator with the global West’s bad habit of plundering and appropriating the cultural objects of far older, more vulnerable cultures–in this case the fictional land of Wakanda.

Of the scene, in an op-ed dated February 22, 2018 written by Casey Haughin for the Hopkins Exhibitionist, an online professional journal, Haughin stated:

It is worth considering the aspects of the scene that are realities in the modern museum. African artifacts such as those shown in the film’s museum are likely taken from a home country under suspicious circumstances, such as notable artifacts in real-life Britain like the Benin bronzes which now reside at the British Museum. It is often the case that individuals will know their own culture as well as or better than a curator but are not considered valuable contributors because they lack a degree. People of color are less represented in museum spaces, and often experience undue discrimination while entering gallery spaces. Finally, museums are experiencing an influx of white women filling staff roles, leading to homogenized viewpoints, and lack senior staff with diverse backgrounds. With these truths represented in such a short but poignant scene, the tension between audiences and institutions is played out to the extreme. 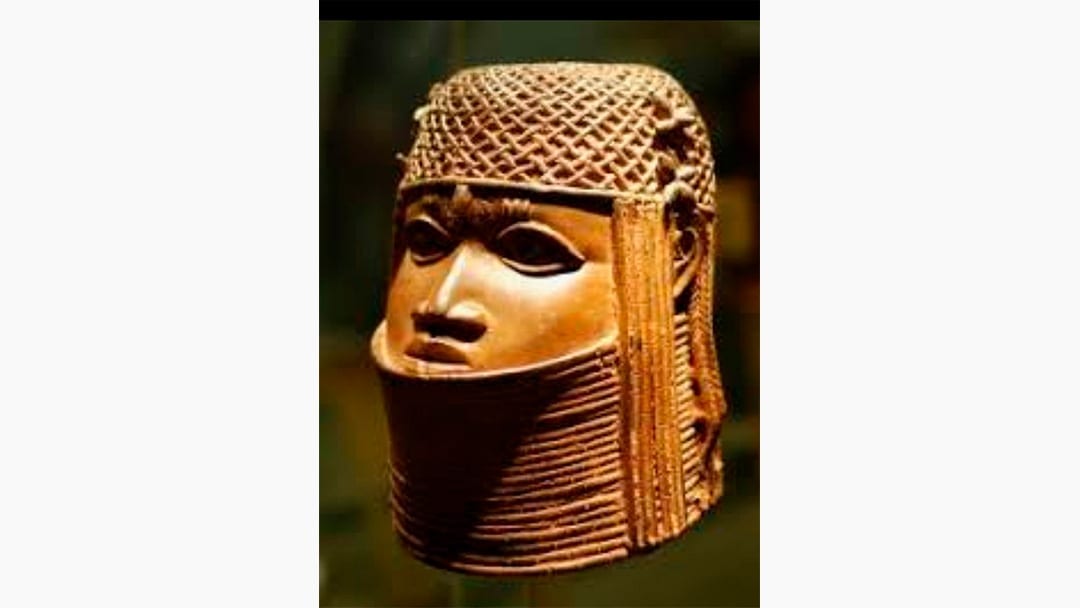 Benin: Ancestral head of an oba part of an exhibition on empire and museum holdings. Photo:Matt Neale. Copyrighted work available under Creative Commons Attribution only license CC BY 4.0

Extreme indeed—in the film, the confrontation in the museum takes place before Killmonger dispatches the museum staff—then “liberates” the expropriated items from the museum which received them.

In a rapidly gentrifying Brooklyn, the fact the museum’s announcement triggered some in the community was hardly surprising. The question of who the keeper of cultural memory should be in places when displaced populations are on their way to becoming remembrances, gives further testament to their powerlessness and erasure.

The question becomes more than a passing comment when discussing the cultural legacy of the Black Descendants of American Slaves, a people whose legacy has been systematically and deliberately obscured.

In Saved, a chapter from Alex Haley and Malcolm X’s the Autobiography of Malcolm X, the authors discuss how cultural erasure and exclusion helped the message of Elijah Muhammed resonate so well with Black people:

I had never forgotten how when my class, me and all those whites, had studied seventh grade United States history back in Mason, the history of the negro had been covered in one paragraph…You can hardly show me a black adult in America–or a white one, for that matter–who knows from the history books anything like the truth about the black man’s role.

When it comes to interrogating the inclusiveness and validity of perspective in the growing scholarship of Black history today, as opposed to the days about which Malcolm writes, while significant scholarship has been and continues to be done, general education and knowledge about the subject remains arguably as poor. One only need point to the many recent episodes of the misrepresentation of Black history we’ve newly put in the rear-view to see this is so.

Such as the case of the school district and textbook company that attempted to get away with re-defining slaves as immigrant “workers.” If not illustrative enough, how about the case of the textbook company which printed children’s books depicting a beaming smiling slave family making a birthday cake for George Washington? When their real-life historic counterparts were forever separated by the iron wall of slavery when one escaped into freedom and disappeared to the vagaries of time and the anonymity of the reckoning of Blackness, while the other, as far as is known remained a slave.

Our sojourn in the United States is unique amongst all the people who have called, do call and will call this land home. A group of people whose identity has been molded in fusion–a people forged by the external fires of racism and injustice–yet able to balance that force and be kept alive by inner force, soul force.

Many months after the Brooklyn Museum controversy, on September 20, 2018, the following tweet appeared on social media: 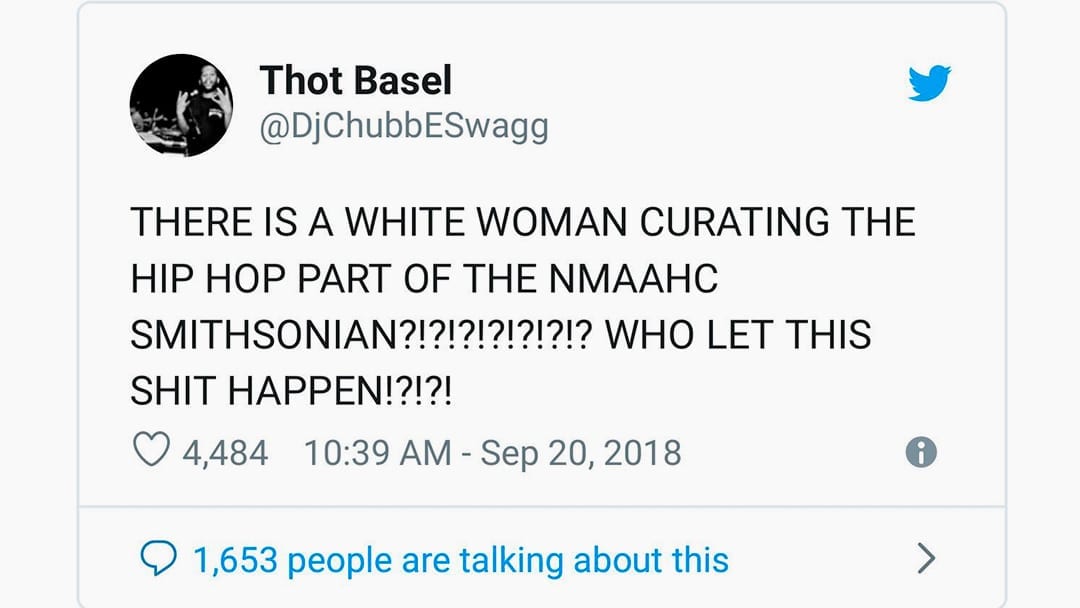 This tweet, in response to the “discovery” that the Smithsonian’s National Museum of African American History and Culture (NMAAHC), arguably the nation’s premiere cultural institution, hired a “white” woman “curatorial specialist” (previously in charge of their Hip-Hop collections) to helm one of the nation’s most important collections of Black culture and history.

While no one questions the credentials of any of these hires, the background to both sets of appointments is one which these days, must be examined closely by a people whose identity has been delineated like shadow, whose very existence is ofttimes defined more by what it is not, than by what it is.

Although we are often told otherwise, we know the truths surrounding our unique legacy in the United States–valuable beyond measure to the Human Family. Although inordinately lucrative and more precious than the riches paid for it, we know that our legacy has not been well esteemed by those who profit most from it.

Not singularly, what is most telling is that due to problems of access and inequality, the Black Descendants of American Slaves are a people for whom it becomes an exception to be considered the foremost expert in the culture which they have created and into which they’ve been born and raised. Almost always the “who” of who they are spoken through the lips, mouths, tongues and agendas of others.

There needs to be a concerted effort made to create the pathways to expertise necessary for marginalized communities to be centered in sharing and passing on their own cultural legacies as is the natural progression and propagation of culture through ante-colonialist societies. In order to achieve this—first, museums must rethink their purpose in society.

This doesn’t mean that the love and expertise required to master a subject and to convey it with passion, empathy or even genius is limited only to those who belong to the groups which are being studied—that   would rob the world of irreplaceable scholarship and understanding. What it does mean is that something is lost by all the world when a culture only truly lives in spaces of exhibition. For a culture to be viable, it must reside with the progeny it was meant for—or, it dies. The culture created by the Descendants of American Slaves is too important for that.

Once confronted with the controversy NMAAHC issued a response on September 25, 2018 a portion of which states:

The museum is shaped and led by a leadership team that is largely African American — and the staff is firmly grounded in African American history and committed to the mission of the museum. We value that diversity and also recognize the importance of diversity of thought, perspectives and opinions. It has helped make the museum what it is today.

The fundamental idea of what a Museum is must change. It must become a central part of the community it serves. It should not be so much a repository for beautiful or awe-inspiring objects as an ark to hold what is waiting to be re-discovered and reclaimed by those whose ancestors created them. Museums must become collaborative welcoming spaces, classrooms which mediate between the highlighted cultures and the world. Only then can we be sure we are doing our best to preserve the context and cultural importance of what is preserved.

The truth which we the Descendants of Slaves have to tell is that a thing’s intrinsic value has absolutely nothing to do with the value which is placed on it by the world…had we not learned this early on, we would not have survived to bear witness today.