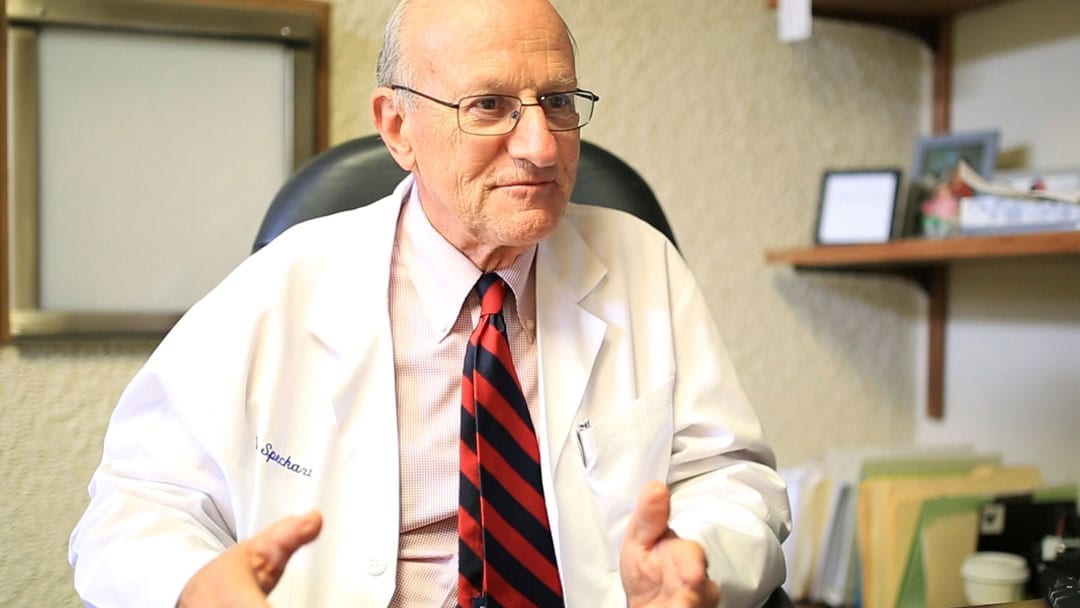 The Medical Board of California has launched investigations into doctors who prescribed opioids to patients who, perhaps months or years later, fatally overdosed.

The effort, dubbed “the Death Certificate Project,” has sparked a conflict with physicians in California and beyond, in part because the doctors being investigated did not necessarily write the prescriptions leading to a death. The project is one of a kind nationally, although a much more limited program is operated by North Carolina’s board.

So far, the board has launched investigations into the practices of about 450 physicians and referred the names of 72 nurse practitioners, physician assistants and osteopathic physicians to their respective licensing boards.

To date, the regulators have formally accused at least 23 doctors of negligent prescribing, and more accusations are expected. Some of the accusations, like one 63-page document filed against Dr. Frank Gilman, a San Diego internist, detail hundreds of prescriptions for one patient over four years, most of them by him. Gilman did not respond to a request for comment.

Using terms such as “witch hunt” and “inquisition,” many doctors said the project is leading them or their peers to refuse patients’ requests for painkiller prescriptions — no matter how well documented the need — out of fear their practices will come under disciplinary review. 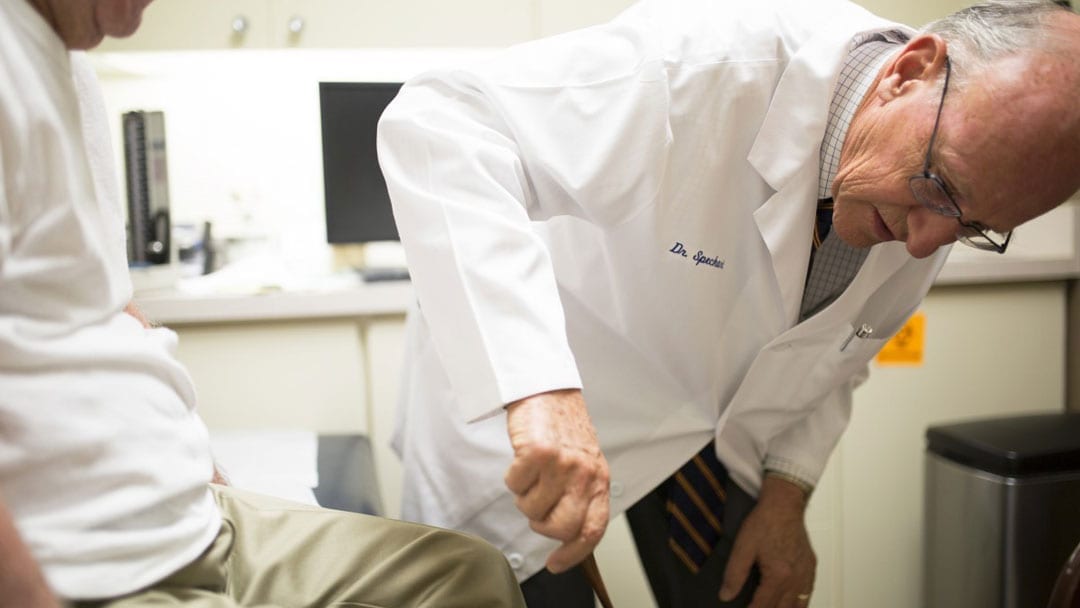 Dr. Paul Speckart, a San Diego internist, said three of his patients last year received board letters that seemed to question the care he gave in treating their well-documented pain, yet the board has not filed any accusations against him. “You can’t even begin to understand how disrupting and upsetting this is,” Speckart says. “It’s not just a threat on your license, it’s a threat that you’ve not been a good physician.” (Courtesy of Megan Wood/inewsource)

The project, first reported by MedPage Today, has struck a nerve among medical associations. Dr. Barbara McAneny, the American Medical Association president and an Albuquerque, N.M., oncologist whose cancer patients sometimes need treatment for acute pain, called the project “terrifying.” She said “it will only discourage doctors from taking care of patients with pain.”

Unusually aggressive for the board, the program is a reaction to the by now well-known phenomenon of physicians overprescribing opioids. Nationally, a host of policy changes and educational efforts have driven down the rate of opioid prescriptions in recent years.

The goal of California’s program quietly launched four years ago, is not necessarily to link a doctor’s specific prescription to a specific patient’s death — although many of the cases do — but to find doctors whose patterns of prescribing are so dangerous they may lead to patients’ ultimately fatal addictions.

Sometimes a doctor was earmarked for investigation even though the cause of death included multiple drugs prescribed by many physicians, or suicide by overdose, board documents indicate.

Kimberly Kirchmeyer, executive director of the Medical Board of California, defended the project. She said the effort has found patterns of “gross negligence,” incompetence and excessive prescribing.

“I understand their frustrations,” she said of the complaining doctors, “but we do have to continue our role with consumer protection.”

She noted that part of the point of the project is to educate doctors and, through probation requirements, change the behavior of those who prescribe excessively.

“That’s education that could potentially save patients in the future,” said Kirchmeyer, whose agency licenses some 141,000 doctors.

“It’s long overdue,” said Carmen Balber, executive director of the nonprofit Consumer Watchdog. The board should investigate opioid-related deaths that occurred more recently, she said: “They need to get their act together and speed things up.”

The agency thus far has looked at deaths only in 2012 and 2013 in which opioids were confirmed as a cause or contributing cause. It matched the names of the dead with the prescription drugs they filled, which are listed in the state’s prescription database. The database also shows the names of the doctors who prescribed to them. Physician experts reviewed those doctors’ prescribing history and selected those who appeared to prescribe drugs heavily.

Some doctors said they were especially angered that the letters they received concerned prescriptions they wrote as long as nine years ago. 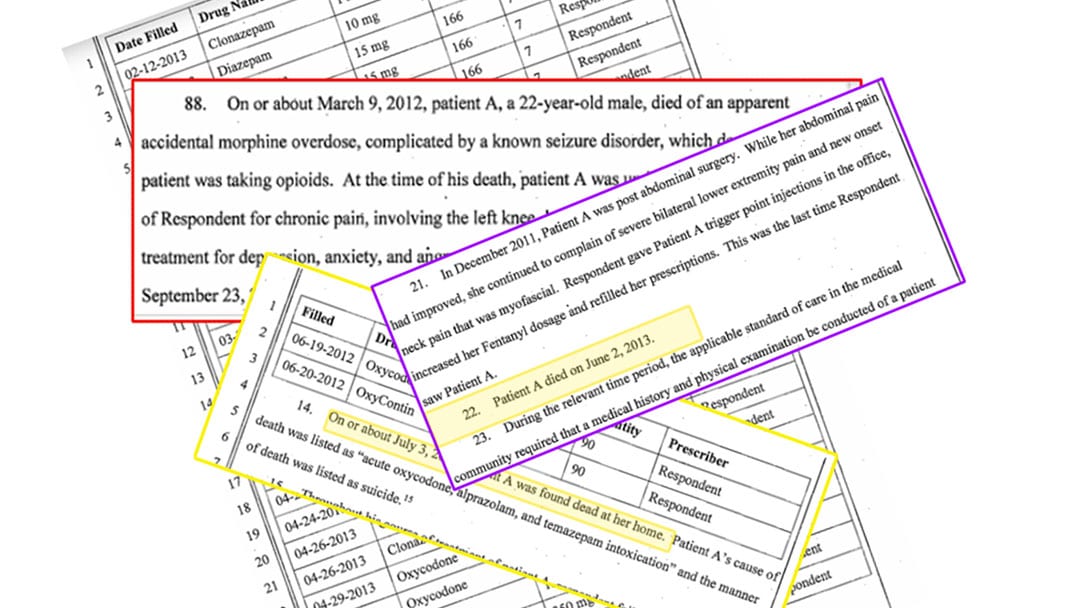 Screenshots of accusations from the Medical Board of California. (Cheryl Clark for KHN)

McAneny, of the AMA, noted that prescribing practices now deemed unacceptable came out of public policies years ago that “compelled doctors to treat pain more aggressively for the comfort of our patients.” Also, payers have measured quality of care by whether their patients answered surveys about whether their pain was well-controlled.

“We’re doing a lot of education to undo the damage” from those policies, she said.

Similarly, Dr. David Aizuss, a Los Angeles ophthalmologist who is president of the California Medical Association, said state and federal guidelines that took effect in 2014 and 2016 impose much more stringent prescribing precautions than “what was going on six or seven years ago.”

Many insurance plans and pharmacies in recent years have restricted dosages and durations of certain painkillers a physician may prescribe at one time.

The crackdown on doctors has created fear, said Dr. Robert Wailes, a pain medicine specialist in Encinitas and chair of the California Medical Association’s Board of Trustees.

“What we’re finding is that more and more primary care doctors are afraid to prescribe and more of those patients are showing up on our doorsteps,” he said.

Officially, the CMA stops short of saying the medical board should stop the project, perhaps to avoid any perception that the association condones overprescribing. But it has asked the board to hire an independent reviewer to assess the criteria the board is using to decide which physicians to investigate, and whether physicians in certain specialties or regions of the state are being targeted more than others.

Dr. Ako Jacintho, a San Francisco addiction medicine specialist, was notified by the board that he was in trouble over a year ago. A patient for whom he had prescribed methadone fatally overdosed in 2012. The letter said “a complaint” had been filed against him, and asked him to respond to the allegations or, if he delayed, face a citation or fine of $1,000 per day. (The medical board can file its own complaints against a doctor.)

The letter said the patient had died of “acute combined methadone and diphenhydramine intoxication.” Jacintho had refilled the patient’s prescription for methadone the day before but said a 10-milligram pill was not a toxic dose. And he said he never prescribed diphenhydramine, the antihistamine sold as Benadryl.

“The only way he would have died was if he had not taken it as directed, or had mixed it with a medication that was not prescribed,” Jacintho said.

As of Dec. 21, Jacintho was still waiting to hear if he would face a formal accusation.

Last year, the board rewrote those letters in a less accusatory tone — describing the “review” as routine — although it still threatens doctors with $1,000 fines. In a much smaller subset of cases, it finds problems that result in formal accusations that can result in discipline, such as public reprimands or restrictions on a physician’s ability to practice.

Despite its designation as a “Death Certificate Project,” the California effort has not focused only on doctors whose patients died. In an unknown number of overdose cases, the board has sent letters to living patients asking them to authorize their doctors to relinquish their medical records to the board, adding that those documents would otherwise be subpoenaed.

Dr. Paul Speckart, a San Diego internist, said three of his patients last year received board letters that seemed to question his quality of care when all he did was try to relieve their well-documented pain. The board has not filed any accusations against him.

“You can’t even begin to understand how disrupting and upsetting this is,” Speckart said. “It’s not just a threat on your license; it’s a threat that you’ve not been a good physician.”