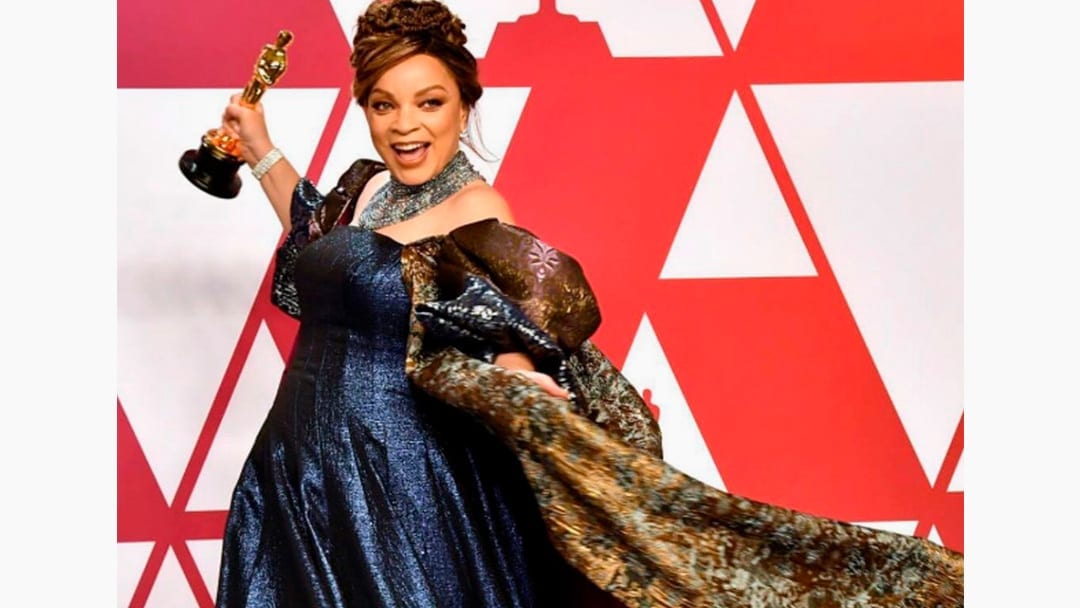 On February 16th, Macy’s Baldwin Hills hosted a discussion between three-time Oscar-nominated Ruth E. Carter, Costume Designer and Shaun Robinson for a discussion about her costume design in Black Panther (2018) and Selma. The former of which she was recently nominated and for the first time won an Oscar. Carter is best known for her work on Spike Lee’s Malcolm X (1992), Amistad (1997) and Black Panther (2018).

In speaking with Carter, it was clear that there is a lot of thought and intention put into her craft, especially with capturing Afro-Diasporic fashion in the costume design behind the Black Panther movie.

“I see Afro-Diasporic fashion as it relates to culture as a barometer,” explained Carter. “If you think back to the 1960’s, you can look at fashion and you’d see red, black and green. You’d see the Gele’s being worn by Black women with T-shirts…that represented our connection to Africa, as well as our sense of being a revolutionary…Our sense of pride as African-Americans of the need to be natural and express ourselves…

So, African fashions and afro-futuristic fashion today are kind of doing the same thing, but now we’re infusing more fashion. It’s not as revolutionary as it was in the 60s, but I still think it’s something that we use as a source of African pride. As a source of proclaiming that we can wear our culture on our bodies and be in the mainstream and be beautiful. It is a form of beauty, of displaying our beauty. …I feel like Africa is coming into the mainstream of fashion and proclaiming its place… that we’re part of the past and we’re part of the future.”

To Carter, fashion is more than a cultural component, but can be the unveiling of an unheard of narrative. The use of fashion as a site of cultural resistance. She has always been challenged to bring the African Diaspora into her work in some form.

Her influences came from poetry she consumed, which included the Last Poets, Sonia Sanchez, James Baldwin, and Nikki Giovanni. She also remembered hearing about Marcus Garvey’s Back to Africa Movement, which prompted her to contemplate and explore what our connection to Africa is.

“I’ve always been a part of organizations and after-school programs that involved African dance and drumming. I think through having a family that accepted Kwanzaa and Swahili—as a child it was not taught as something to shy away from—that created an openness. So, when I became a professional and started working at 40 Acres and a Mule Filmworks, we always knew with Spike Lee’s films, we wanted to embrace the beauty of African-Americans. We wanted to expose and present the beauty of brown skin and what looks best against brown skin. You look at Do the Right Thing, Mo’ Betta Blues, Crooklyn, and you see Africa. You see color and culture.”

Carter’s work in Black Panther harkens a more expansive idea of African Diaspora culture through fashion and expressions of beauty that de-centralized the global Eurocentric standard while avoiding the primitivism that Africa is often suspended in. Carter elucidated, “I try to take a deeper dive. I try to go a little bit further because I think, in general, we have accepted a lot of things as far as Africa is concerned but we have not defined it. We have been taking a real broad brush to the idea of African culture for a long time. We don’t know what it means, where it comes from, what the origins of it are, that wax cloths are appropriated. We don’t know anything about it, but that’s okay because we have to start somewhere!…”

The generalization or “broad brush” that is often taken to Africa suspends it in a realm of untouchability and relegates it to the past. The idea that there is a Point of Return, romanticizes Africa to the point of it becoming a monolith in our understanding of it. Cultural theorist, Stuart Hall, touches upon this in Cultural Identity and Diaspora, in relation to Africa.

He says, “It is not a fixed origin to which we can make some final and absolute return. Of course, it is not mere phantasm either. It is something- not a mere trick of the imagination.” By removing Africa from an essentialized representation, Carter’s costume design expands our perception of African culture that encapsulates the futurity, transcendence, and beauty of its many cultures.

She expounded upon tribal beauty traditions like scarification in Ethiopia or how Himba women in North-Western Namibia cover their bodies in a mix of clay and shea butter. “People want to say that it was something else, like “Oh, it was for sanitary reasons during times of drought and it helps ward of mosquitoes.” Neither one of those is true, it’s just for beauty. They just think that they look beautiful with that on their bodies. When we stop thinking one way about things, we can open our minds to new ideas about people and culture and we can start understanding each other better. When we can stop looking at each other as so different and foreign, we will start looking at each other with understanding of our differences.”