Earlier this month a team of federal legislators, Elijah Cummings, (D-MD) and John Katko, (R-NY) introduced bipartisan legislation in a renewed attempt to place the face of abolitionist Harriet Tubman, on the front of the $20 bill.

Tubman’s image would replace that of President Andrew Jackson whose tarnished legacy continues to draw criticism not only for his owning of slaves but also for his harsh treatment of them in addition to his cruel and forced removal of Native Americans from their ancestral lands.

In 2016, many in the nation celebrated when on April 20, after an exhaustive, nationwide selection process, former U.S. Treasury Secretary Jacob Lew wrote an open letter to the American people, stating “I am excited to announce that for the first time in more than a century, the front of our currency will feature the portrait of a woman—Harriet Tubman on the $20 note.”

At the time Lew explained how his decision to put Tubman on the $20 bill was driven by thousands of responses his department received from Americans young and old to their requests for potential candidates. “I have been particularly struck,” he wrote, “by the many comments and reactions from children for whom Harriet Tubman is not just a historical figure, but a role model for leadership and participation in our democracy.”

According to Lew, people shared their thoughts about Tubman’s life and her works and how her efforts changed our nation and represented our most cherished values. Tubman once said, “I would fight for liberty so longs and my strength lasted.”

Tubman not only fought for the freedom of slaves but also for the right of women to vote. “Her incredible story of courage and commitment to equality embodies the ideals of democracy that our nation celebrates,” Lew acknowledged in his letter adding, “We will continue to value her legacy by honoring her on our currency.”

Apparently, when President Trump took office in January 2018—he disagreed.

She also alleged in the book that when Trump saw a picture of Tubman he exclaimed, ““You want me to put that face on the twenty-dollar bill?”

CNN reported that when Mnuchin was asked about Tubman and the $20 bill during an interview in January 2018 at the Economic Club of Washington he declared, “We haven’t made any decisions as to whether we’ll change the bill or won’t change the bill.” Mnuchin’s spokesperson purportedly told CNN earlier this year, “the secretary’s position remains.” 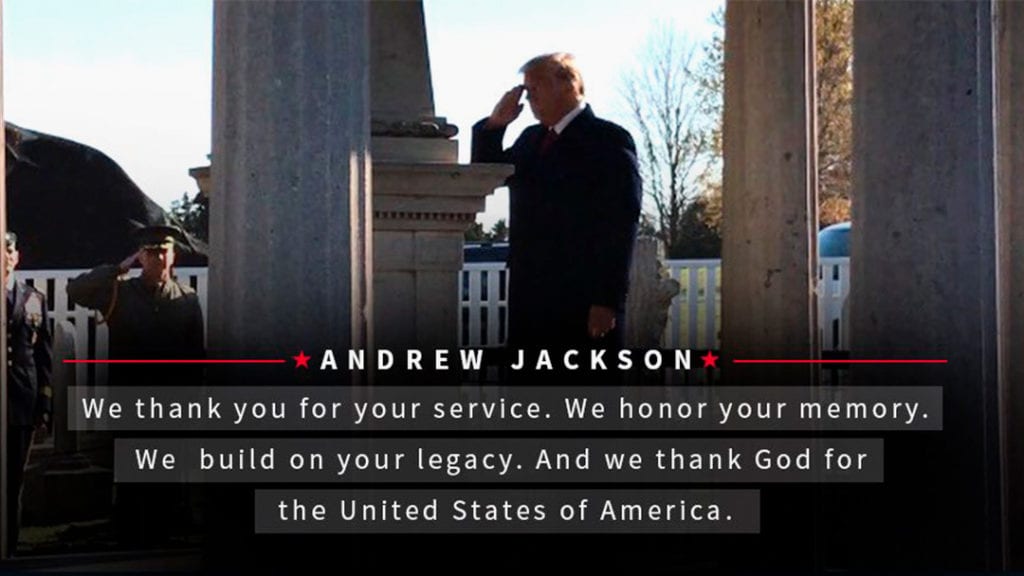 It appears Mnuchin’s Treasury Department is hiding behind its efforts to develop new security features to prevent counterfeiting of the bill—something Lew and his team were already working on three years ago.

When the decision regarding the currency changes were finalized in 2016, Lew announced he had directed the Bureau of Engraving and Printing to work closely with the Federal Reserve to accelerate work on the new bill. “Our goal is to have all three (changes were also finalized for the $5 and $10 bills) new notes go into circulation as quickly as possible, while ensuring that we protect against counterfeiting through effective sophisticated production.”

It is no secret President Trump admires Andrew Jackson who served as president of the United States from 1829 to 1837. Trump had a portrait of Jackson placed in the Oval Office, made a special visit to Jackson’s tomb and has posted admiringly about Jackson on twitter.

Lew had expected the Harriet Tubman $20 bill would be unveiled in 2020. It would mark the first time a Black woman would be presented on U.S. currency. In addition, Tubman was also expected to be the first woman in more than 100 years to appear on the nation’s paper currency.

Harriet Tubman escaped slavery then risked her own life by returning again and again to the south. In the process, she brought more than three hundred slaves to freedom. She also served as a spy for the Union army during the Civil War and was a committed abolitionist.

To most Blacks and many other Americans (as acknowledged by Lew in his open letter), Harriet Tubman has earned her place on the $20 bill. Advocates believe it will be a welcome upgrade from the current image on the $20 bill of the racist, slave owning former President Andrew Jackson, who is—not surprisingly—so admired by Donald J. Trump.

In light of the Trump Administration’s luke-warm commitment to this change, Cummings and Katko are determined to put the decision to a vote in the people’s House.