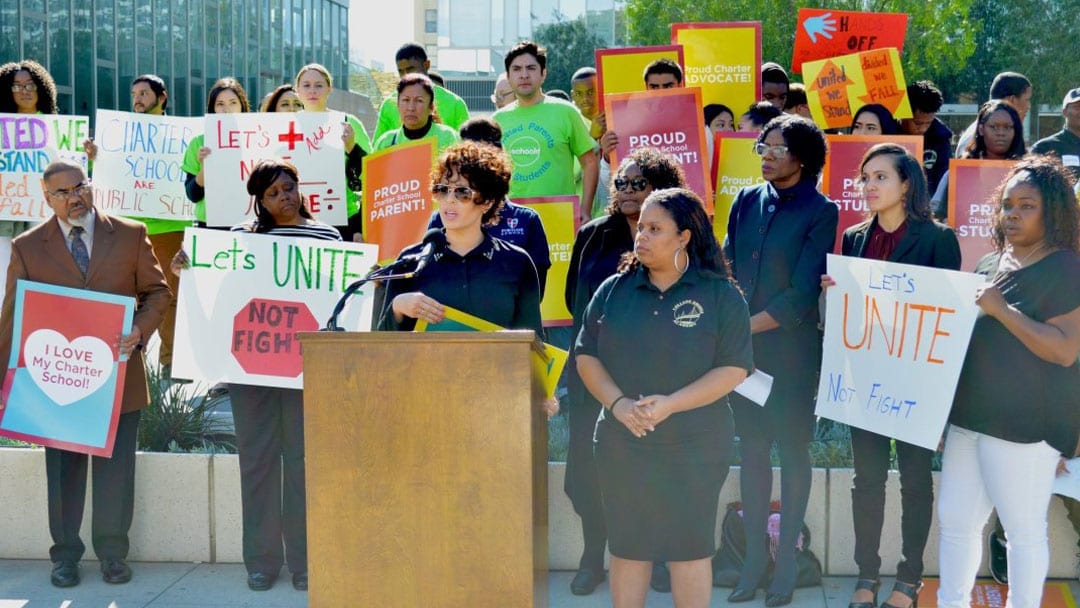 Three Southern California Chapters of the NAACP—San Diego, Riverside and San Bernardino Counties—recently broke from NAACP National which 107th National Convention in 2016, not only called for a moratorium on Charter School expansion but also pressed for the strengthening of oversight in governance and practice.

Each of the three branches submitted separate resolutions to the NAACP’s state board expressing their opposition to the moratorium. Their actions not only broke with the national NAACP, it also put them at odds with the state organization’s education chair, Julian Vasquez Heilig, who was also a driving force behind the national organization’s decision to adopt the moratorium.

According to an account by the LA School Report, Alice A. Huffman, president of the California Hawaii NAACP, sent an email to the leaders of the three Southern California branches reinforcing to them how  the state branch has already taken a position and stressed she would appreciate it if they “would rescind their positions.”

When national initiated the moratorium, Roslyn M. Brock, Chairman of the National NAACP Board of Directors explained, “The NAACP has been in the forefront of the struggle for and a staunch advocate of free, high-quality, fully and equitably-funded public education for all children.”

Adding, “We are dedicated to eliminating the severe racial inequities that continue to plague the education system.”

The National Board’s decision to ratify this resolution which called for the moratorium, reaffirmed prior NAACP resolutions regarding charter schools and the importance of public education. The moratorium was in support of the organization’s 2014 Resolution “School Privatization Threat to Public Education,” which codified the organization’s opposition to the privatization of public schools and the public subsidizing or funding of for-profit or charter schools.

Charter Association President and CEO Myrna Castrejón told the LA School Report, “It sounds like NAACP branches are breaking ranks with the California State NAACP and national board. Everybody knows black students are the lowest-performing sub-group, other than students with special needs, and the system has done nothing to provide targeted support.”

Castrejón further expressed her sentiment that it makes sense for branches of the NAACP, that represent regions of the state with the highest black student enrollment, to push back against the moratorium, “They want quality options in the public school system. They want charter schools,” she declared.

Some have accused Christina Laster, education chairwoman for the NAACP’s Riverside branch of being paid by the charter school association to push the resolution. She strongly denied the accusation and called it “insane.”

“What’s been missed here is that there’s an assumption that all parents need some kind of direction from an outside stakeholder to tell them what’s best for their children. We’re missing the whole dynamic of supporting parental choice. They are able to make their own decision. We don’t have the power to direct parental decision.”

Recent reports show 18 percent of California’s charter schools are in the top 10 percent of performance statewide compared to 9 percent of the state’s traditional public schools. In addition, a U.S. News & World Reports’ annual ranking of public schools released last May showed seven of the top 10 high schools in California were charters.

On the other hand, there are legitimate concerns. For example, students at for-profit charters tend to perform poorly, In addition, when public charter schools are compared to traditional public schools with similar populations, analysis shows charters appear to provide greater benefits for students in low-income neighborhoods; in contrast, among students attending charters in more affluent areas—academic performance declines.

As the legislation discussion on this issue progresses it is also important to keep in mind the national NAACP originally called for the moratorium over four very specific concerns it believed required resolution. Many believe these considerations as relevant and important so when the two approaches to education are compared—the playing field is level.

The NAACP’s strong support of public education is historic and has denounced movements toward privatization that divert public funds to support non-public school choices.

When the NAACP called for the moratorium in October 2016 Cornell William Brooks, former  President and CEO of the NAACP who now serves as Professor of the Practice of Public Leadership and Social Justice at Harvard Kennedy School declared, “The NAACP’s resolution is not inspired by ideological opposition to charter schools but by our historical support of public schools—as well as today’s data and the present experience of NAACP branches in nearly every school district in the nation.”