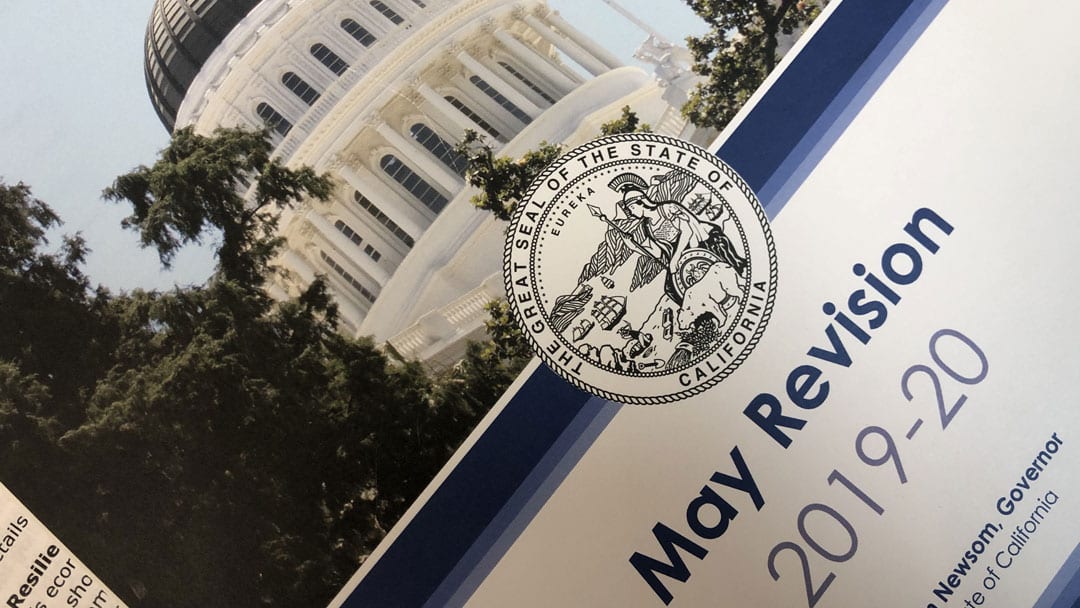 Public schools will reap most of the gains if the Democratic-controlled Legislature rolls with him. Newsom also upped his ante on the housing crisis with a proposed $1 billion more to combat homelessness.

Still, Californians can expect some fiscal debate: Some Democrats want to go further on Medi-Cal spending, and others are leery of Newsom’s tax ideas, such as the sales tax break he wants to give on tampons.

And Newsom acknowledged the lessons of past budget exuberance, sounding for all the world like a certain frugal predecessor. Here are five key takeaways:

Public schools will be #winning

Talk about an apple for the teacher: Under Newsom’s revised plan, California will send $81.1 billion to K-12 schools and community colleges for the new fiscal year that starts in July.

Although some Democrats and education advocates continue to complain about lackluster per-pupil spending, that investment would be the biggest ever, up nearly $400 million from Newsom’s January budget. The governor noted that school funding will account for 45% of the state’s general fund, much higher than the 40% minimum guaranteed under Proposition 98, the state’s education funding formula. Lawmakers may also question whether any money needs to be set aside in a special public school, rainy day fund.

One notable change is a scale-down of an earlier $750 million proposal to expand access to full-day kindergarten by building more facilities. Instead, about $150 million would go toward teacher recruitment and training while the other $600 million will be prioritized for districts with high concentrations of poor students.

School districts would also get additional aid to pay for teachers’ pensions. In January, Newsom proposed to contribute $3 billion extra to the California State Teachers’ Retirement System, a move that lowers districts’ contribution rates from 18.13% down to 17.1%, freeing up local money, the better to address threatened teacher strikes. The May budget revision adds $150 million to bring the contribution rate down to 16.7% for one year in 2019-20.

And Newsom’s not done weighing in on the state’s polarizing charter school debate, another labor flashpoint. After signing a fast-tracked charter school transparency law, the governor is proposing regulations to prohibit charter schools from turning down students based on their grades or special education status. The governor wants to prevent charter schools from asking for students’ transcripts or records before enrolling them and to create a new state system for charter families to report complaints.

NIMBYs beware: Expanding on his push to aid Californians in need and address the state’s mounting housing crisis, Newsom announced a $1 billion investment to combat homelessness.

One step or two on universal health coverage?

He says he’s open to ideas but wants to make sure the state moves toward universal health coverage in a financially responsible way. “My goal is universal health care for everyone,” he said. “That is the goal ultimately.”

The administration also affirmed its commitment to restore eyeglasses benefitsfor Medi-Cal patients, although health advocates say Newsom remains silent on other benefits that were cut during the last recession.

Although he tweaked subsidy eligibility and amounts, the governor is also sticking to an idea for a state individual mandate. The idea is to use penalties to help expand subsidies for middle-income earners to purchase health insurance through Covered California, the state’s health insurance exchange.

Newsom’s options may be limited, and he may be burnishing his ‘Governor Dad’ brand, but his agenda clearly is that of a guy who knows the price of Pampers. Earlier this week, he announced expanding the state’s paid family leave program by 2 weeks, threw support behind legislative proposals to eliminate sales tax on diapers and feminine products (even if there isn’t agreement yet for how long) and wants to boost the state’s Earned Income Tax Credit for families with children under 6 from $500 to $1,000.

For working mothers, the administration had already proposed in January increasing CalWORKS grants. For a family of three, the highest grant will go from $785 to $888 per month. While that’s an increase of $103, it still remains 50% of federal poverty level.

Rarely have two governors differed more in style than Newsom and his predecessor. Still, at times during his 90-minute budget update, Newsom sounded for all the world like Jerry Brown.

The new governor repeatedly cited the old one’s warnings about the need for healthy state reserves and fiscal prudence. Newsom’s budget staff projects the state could lose $70 billion over three years in a moderate recession.

“We have a record amount of rainy day reserves and a record amount of resiliency. We have well over $30 billion-plus to weather a major storm and I would argue we have much more than that,” Newsom said. “We are preparing for a very different climate and we’ve never been more prepared as a state.”