How Black Pharmacists Are Closing The Cultural Gap in Health Care 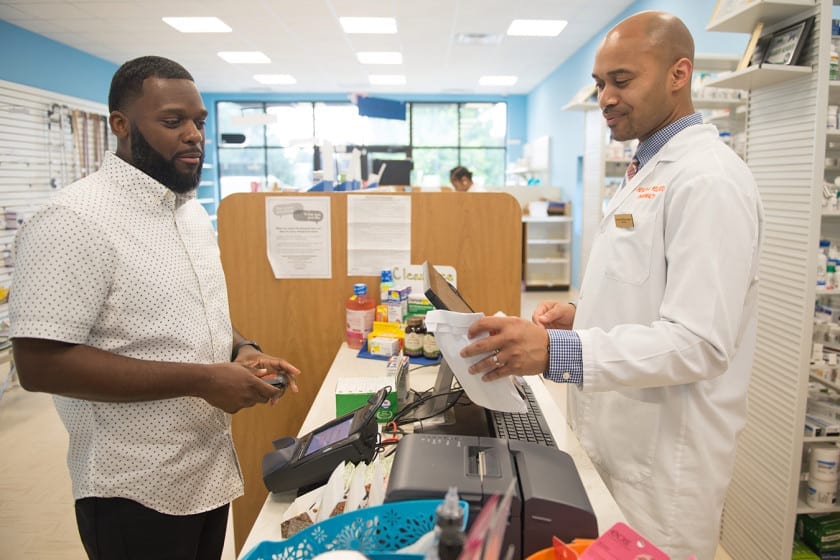 Shiloh, Ill. — After a health insurance change forced Bernard Macon to cut ties with his Black doctor, he struggled to find another African American physician online. Then, he realized two health advocates were hiding in plain sight.

At a nearby drugstore here in the suburbs outside of St. Louis, a pair of pharmacists became the unexpected allies of Macon and his wife, Brandy. Much like the Macons, the pharmacists were energetic young parents who were married — and unapologetically Black.

Vincent and Lekeisha Williams, owners of LV Health and Wellness Pharmacy, didn’t hesitate to help when Brandy had a hard time getting the medicine she needed before and after sinus surgery last year. The Williamses made calls when Brandy, a physician assistant who has worked in the medical field for 15 years, didn’t feel heard by her doctor’s office.

“They completely went above and beyond,” said Bernard Macon, 36, a computer programmer and father of two. “They turned what could have been a bad experience into a good experience.” 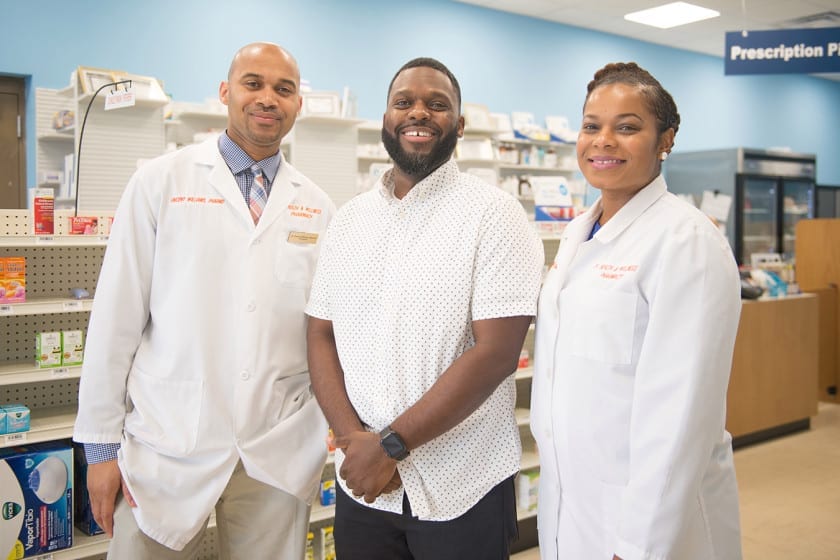 “They completely went above and beyond,” says Bernard Macon (center) of Vincent and Lekeisha Williams, owners of LV Health and Wellness Pharmacy in Shiloh, Ill. (Michael B. Thomas for Kaiser Health News)

Now more than ever, the Macons are betting on Black medical professionals to give their family better care. The Macon children see a Black pediatrician. A Black dentist takes care of their teeth. Brandy Macon relies on a Black gynecologist. And now the two Black pharmacists fill the gap for Bernard Macon while he searches for a primary care doctor in his network, giving him trusted confidants that chain pharmacies likely wouldn’t.

But medical providers who give patients culturally competent care — the act of acknowledging a patient’s heritage, beliefs and values during treatment — often see improved patient outcomes, according to multiple studies. Part of it is trust and understanding, and part of it can be more nuanced knowledge of the medical conditions that may be more prevalent in those populations.

For patients, finding a way to identify with their pharmacist can pay off big time. Cutting pills in half, skipping doses or not taking medication altogether can be damaging to one’s health — even deadly. And many patients see their pharmacists monthly, far more often than annual visits to their medical doctors, creating more opportunities for supportive care.

That’s why some Black pharmacists are finding ways to connect with customers in and outside of their stores. Inspirational music, counseling, accessibility and transparency have turned some minority-owned pharmacies into hubs for culturally competent care.

“We understand the community because we are a part of the community,” Lekeisha Williams said. “We are visible in our area doing outreach, attending events and promoting health and wellness.”

To be sure, such care is not just relevant to African Americans. But mistrust of the medical profession is especially a hurdle to overcome when treating Black Americans.

Many are still shaken by the history of Henrietta Lacks, whose cells were used in research worldwide without her family’s knowledge; the Tuskegee Project, which failed to treat Black men with syphilis; and other projects that used African Americans unethically for research.

At Black-owned Premier Pharmacy and Wellness Center near Grier Heights, a historically Black neighborhood in Charlotte, N.C., the playlist is almost as important as the acute care clinic attached to the drugstore. 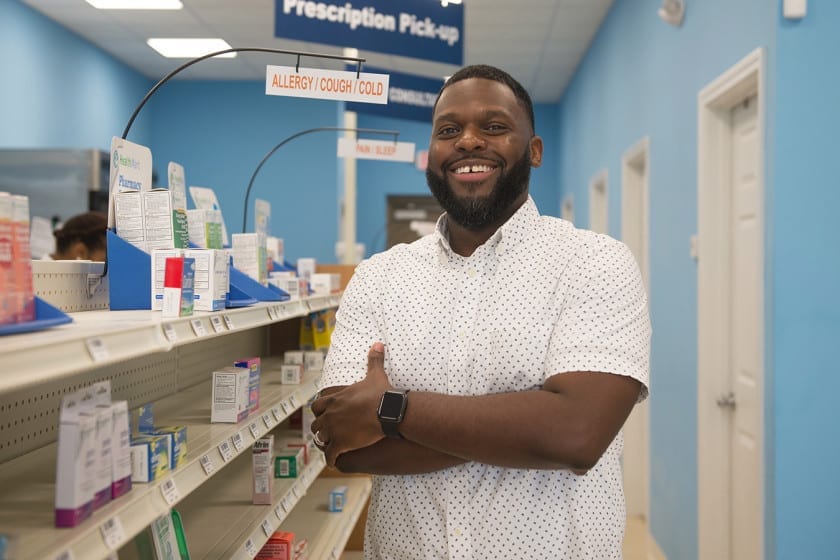 Independent black-owned pharmacies fill a void for African American patients looking for care that’s sensitive to their heritage, beliefs and values. For Bernard Macon, LV Health and Wellness Pharmacy in Shiloh, Ill., provides some of that vital support. (Michael B. Thomas for Kaiser Health News)

Owner Martez Prince watches his customers shimmy down the aisles as they make their way through the store listening to Jay-Z, Beyoncé, Kirk Franklin, Whitney Houston and other Black artists. Prince said the music helps him in his goal of making health care more accessible and providing medical advice patients can trust.

In rural Georgia, Teresa Mitchell, a Black woman with 25 years of pharmacy experience, connects her customers with home health aides, shows them how to access insurance services online and even makes house calls. Her Total Care Pharmacy is the only health care provider in Baconton, where roughly half the town’s 900 residents are Black.

“We do more than just dispense,” Mitchell said.

Iradean Bradley, 72, became a customer soon after Total Care Pharmacy opened in 2016. She struggled to pick up prescriptions before Mitchell came to town.

“It was so hectic because I didn’t have transportation of my own,” Bradley said. “It’s so convenient for us older people, who have to pay someone to go out of town and get our medicine.”

Lakesha M. Butler, president of the National Pharmaceutical Association, advocates for such culturally competent care through the professional organization representing minorities in the pharmacy industry and studies it in her academic work at the Edwardsville campus of Southern Illinois University. She also feels its impact directly, she said, when she sees patients at clinics two days a week in St. Charles, Mo., and East St. Louis, Ill.

“It’s just amazing to me when I’m practicing in a clinic setting and an African American patient sees me,” Butler said. “It’s a pure joy that comes over their face, a sigh of relief. It’s like ‘OK, I’m glad that you’re here because I can be honest with you and I know you will be honest with me.’”

She often finds herself educating her Black patients about diabetes, high blood pressure, high cholesterol and other common conditions.

“Unfortunately, there’s still a lack of knowledge in those areas,” Butler said. “That’s why those conditions can be so prevalent.”

For Macon, his experiences with medical professionals of backgrounds different from his own left him repeatedly disappointed and hesitant to open up.

After his wife had a miscarriage, Macon said, the couple didn’t receive the compassion they longed for while grieving the loss. A few years later, a bad experience with their children’s pediatrician when their oldest child had a painful ear infection sparked a move to a different provider.

“My daughter needed attention right away, but we couldn’t get through to anybody,” Macon recalled.

“That’s when my wife said, ‘We aren’t doing this anymore!’”

Today, Macon’s idea of good health care isn’t colorblind. If a doctor can’t provide empathetic and expert treatment, he’s ready to move, even if a replacement is hard to find.

Kimberly Wilson, 31, will soon launch an app for consumers like Macon who are seeking culturally competent care. Therapists, doulas, dentists, specialists and even pharmacists of color will be invited to list their services on HUED. Beta testing is expected to start this summer in New York City and Washington, D.C., and the app will be free for consumers.

“Black Americans are more conscious of their health from a lot of different perspectives,” Wilson said. “We’ve begun to put ourselves forward.”

But even after the introduction of HUED, such health care could be hard to find. While about 13% of the U.S. population is Black, only about 6% of the country’s doctors and surgeons are Black, according to Data USA. Black pharmacists make up about 7% of the professionals in their field, and, though the demand is high, Black students accounted for about 9% of all students enrolled in pharmacy schoolin 2018.

For Macon, though, the Williamses’ LV Health and Wellness Pharmacy in Shiloh provides some of the support he has been seeking.

“I still remember the very first day I went there. It was almost like a barbershop feel,” Macon said, likening it to the community hubs where customers can chitchat about sports, family and faith while getting their hair cut. “I could relate to who was behind the counter.”

Header Photo: Bernard Macon picks up his prescription on June 6 at LV Health and Wellness Pharmacy in Shiloh, Ill. (Michael B. Thomas for KHN)