State May Push Cities and Counties to Draw “Fairer” Districts 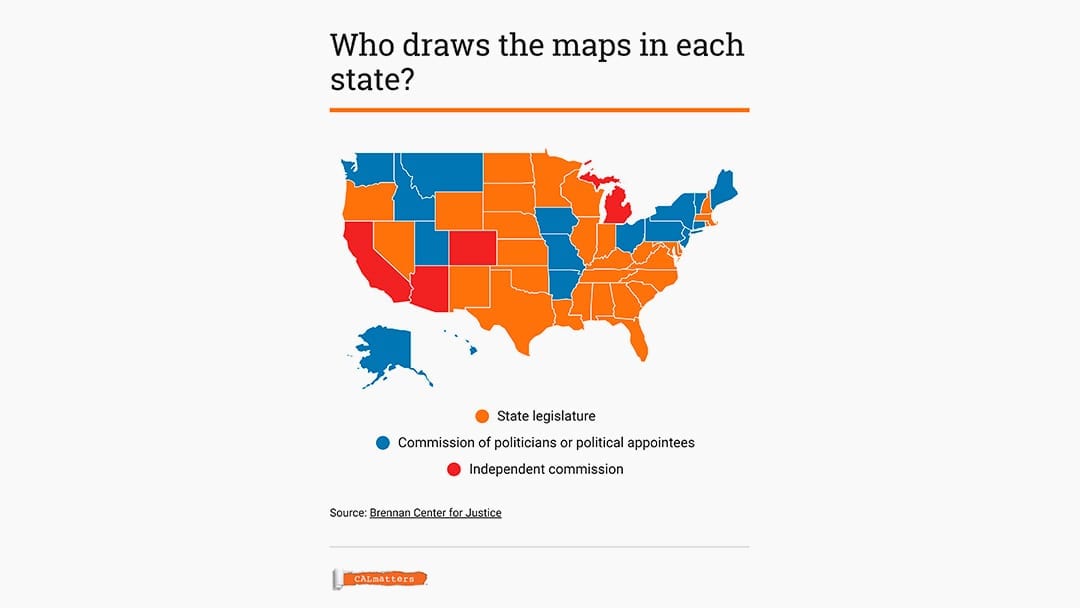 Rhonda Shader is tired of looking at maps of Placentia.

First as a councilmember and now as the mayor, Shader has seen the 7-square miles of her north Orange County town sliced and diced at least a dozen ways to satisfy the demands of good governance groups who accuse the city’s leaders of gerrymandering and discrimination.

“We’ve really made an effort to stay out of court because quite honestly our city can’t afford it,” said Shader.

In 2016, the city agreed to ditch its at-large election system and adopt a new map with five distinct districts. That came after the Mexican American Legal Defense and Educational Fund threatened to sue the city, arguing that the old system, with each council member representing the entire city, made it all but impossible for Placentia’s minority Latino community to elect a representative of their choosing.

When the city adopted a new map in 2018—one of eleven proposals—the Legal Defense Fund threatened to sue again, arguing that the designated-Latino district was short on Latinos voters.

Now the city is considering its third map.

Placentia is one of hundreds of California cities and counties that have been forced, either by court order or the threat of legal action, to redraw their electoral maps over the last decade. In Kern County, Palmdale, Torrance, Menlo Park and Martinez, to name a few, litigants have accused local leaders of abusing the districting process to disempower minority groups, protect incumbents, or tilt the scales in favor of one party.

“When the lines aren’t drawn fairly, it can block a community out of having representation for a whole decade. On top of that, when people feel the election process is rigged, it undermines trust in democracy,” said Nicolas Heidorn, policy and legal director with California’s Common Cause, a government transparency group.

They may soon have extra help from the state of California: Legislators are considering two bills that would place new districting rules on local governments.

Already California’s congressional and state legislative districts are drawn by a bipartisan commission, which supporters say represents a national gold standard in fair, transparent political map design. Its intent is to prevent gerrymandering—a technique of map manipulation named for Elbridge Gerry, who as Massachusetts governor in 1812 permitted his party to draw districts to their advantage, including one shaped like a salamander. An editorial cartoonist at the time lampooned it as a “Gerrymander.”

Now, despite a recent U.S. Supreme Court ruling that gives lawmakers across the country the greenlight to gerrymander as much as they like, these two bills could push the state even further in the other direction.

In the wake of a recent ruling from the U.S. Supreme Court, advocates say it’s more important than ever that the state take the lead on this issue.

In an opinion issued in late June, Chief Justice John Roberts ruled that the county’s highest court did not have the authority to second-guess district lines just because they artificially inflate the electoral prospects of one party over another. But, he reminded opponents of partisan gerrymandering, “the avenue for reform established by the Framers, and used by Congress in the past, remains open.”

In other words, states that are tired of gerrymandering are invited to do something about it at the state level.

“These bills are basically taking up the challenge that was laid down in that opinion,” said Heidorn with Common Cause, the co-sponsor of both bills.

So far, no high-profile Democratic lawmakers have argued that the state should abandon its high-minded position on nonpartisan districting in response to the Court’s ruling. That might be because California’s independent districting system was approved by voters in two separate ballot measures and that, with Democrats holding supermajorities in both chambers of the state Legislature along with 46 of the state’s 53 congressional seats, there isn’t that much room for electoral improvement.

If both bills were to become law, they would go into effect next year, just in time for the next round of mapmaking after the 2020 Census. For the hundreds of cities that have, like Placentia, been forced to adopt by-district city councils over the last decade, this will be their first experience with redistricting.

“As a general matter, it is wise to ensure that the first redistricting process that these local governments experience go as smoothly and transparently as possible,“ said Thomas Saenz, president of the Mexican American Legal Defense and Educational Fund. Saenz said the Fund withdrew its support of SB 139 last week, after the bill was amended to allow counties to establish committees with equal partisan representation.

“We don’t think that complies with the US Constitution,” he said. “If particular counties did that we would look at whether there is a legal avenue to challenge that choice.”

The Fund is officially neutral on both bills.

So far, most of the opposition has come from county and city government groups, who are worried they will be saddled with the costs of implementing these reforms.

But others have raised philosophical objections—arguing that while extreme gerrymandering results from partisan warfare at the state and national level, such partisanship is largely absent in cities and counties where offices are technically nonpartisan.

“This is what folks mostly up in Sacramento are clueless about,” said Doug Johnson, president of the National Demographics Corporation, which consults with cities on political mapmaking and who has drawn many electoral maps that could be invalidated by these laws. “They’re so used to Sacramento politics and the Sacramento gerrymandering and the nonstop partisanship of Sacramento, they miss that local government in California is a whole different world.”

Courts have not always seen things that way.

Last year, a federal district judge found that the Kern County Supervisors’ map split the Latino-dominated portion of the county across multiple seats, depriving Latinos “of an equal opportunity to elect representatives of their choice.” The county was ordered back to the drawing board.

Under Allen’s bill, Kern’s next map would likely be drawn by an independent commission.

Placentia faced a similar charge when it approved its 2018 district map, which cut the city into columns running north to south, splitting the Latino neighborhood between the first and second district. But Shader said that configuration was designed to promote collaboration at City Hall.

“I feel like they’re trying to control our process,” she said of Bonta’s bill. “We know our communities.”

Kevin Shenkman has heard this argument before. By his count, the Malibu-based lawyer has forced over 70 California cities to redraw their maps, beginning with his first suit against Palmdale in 2012.

“That’s just another way of saying we don’t want to have to pay attention to the poor neighborhood,” he said. “Does that make making decisions more difficult? Sure. But it also makes those decisions better because you’ve got every viewpoint at the table.”

Shenkman said that he is concerned that Bonta’s bill doesn’t go far enough to prevent elected city officials from drawing districts simply to protect their own seats. But splitting neighborhoods—even for the sake of unity—would be out.

Yet the idea of the state imposing its will on localities rubs some lawmakers the wrong way—including one with a record against gerrymandering.

Sen. John Moorlach, a Republican from Costa Mesa, sat on the Orange County Board of Supervisors in 2011, when a proposed district map grouped together the largely Republican Vietnamese community while splitting up the majority Democratic Latino voters. Moorlach cast the lone “no” vote, telling a reporter, “I just wanted to stay with my principles. I’m opposed to gerrymandering.”

Even so, he opposes SB 139. Moorlach said he supported two bills in 2016 that gave cities, counties, school and other special districts the option to appoint redistricting commissions.

“I appreciated that spirit,” he said. “But I get a little nervous about requirements—you shall versus you may.”