In Needles, a ‘sanctuary’ for gun owners—and ‘a little jab in the eyes’ for California 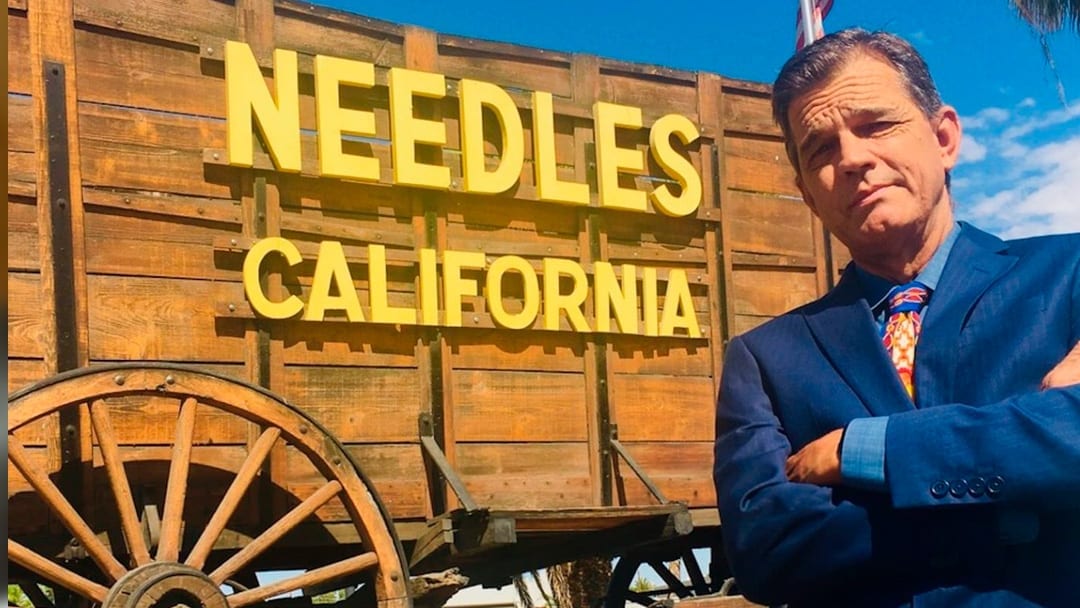 The whole business began with a backyard barbecue.

Tim Terral, a 50-year-old cable company worker recently elected city councilman in Needles, on the rural eastern edge of California, planned a cookout for some buddies who live just over the state line in Arizona.

Nobody wanted to come.

Under California law, they couldn’t bring their  loaded firearms across the state line, so they all decided to stay home.

“They’re ex-military,” Terral explained. “I guess those guns are like security blankets.”

But for Terral, the incident was more ammunition for a simmering resentment among many of the 5,000 residents of a San Bernardino County town that’s 550 miles and an entire political culture away from the state capital in Sacramento.

Like many inland Californians, Needles residents say they’re held hostage by state legislators who are too liberal and want too much control over their lives. They gripe about strict gun laws they say trample their constitutional right to keep and bear arms.

So Terral fought back. He spearheaded a resolution, passed last week by the council, that declared Needles a “Second Amendment Sanctuary,” a place where both California gun owners and those visiting from out-of-state can expect lenient enforcement on Golden State’s rules governing, for example, ammunition and concealed carry permits.

Terral even chose wording to take a swipe at Democratic legislators in Sacramento, and in cities such as San Francisco and Los Angeles, who have declared “sanctuary” policies limiting the involvement of state and local law enforcement in the pursuit of undocumented immigrants targeted by the Trump Administration.

“With the gun resolution, I purposely chose the word ‘sanctuary’ to take a stab at all the liberals,” said Terral. “It was a little jab in the eyes.”

Needles residents insist they don’t want to become any wild west Dodge City where gunslingers rule. But they do want to make it easier for interstate travelers who pull off U.S. Interstate 40 for food and fuel to avoid a felony arrest if a traffic stop produces a loaded but legally-registered gun from outside California.

They also want Sacramento to amend a recently-enacted proposition that bans gun owners from bringing ammunition from other states, effectively requiring the state’s gun owners to buy their ammunition in California.

Needles Mayor Jeff Williams, a former San Bernardino County sheriff’s deputy, grumbles at state law every hunting season: “I have to drive 140 miles to Barstow to buy ammunition when right across the border in Arizona there are a dozen gun stores.”

Williams, who carries a Glock 45 9mm pistol, which he says “will throw a big brick at somebody,” is soliciting support from various state border towns — including Yreka, Truckee, Blythe and Eureka — to support interstate reciprocity with legal gun owners who possess concealed weapons permits outside California.

“When Sacramento passes a new law, they look to San Francisco and Los Angeles. They don’t come looking to small towns like us, and it’s time we made our opinions known,” said Williams. ‘We realize changing state law is pretty far-fetched, but you’ve got to start somewhere, you’ve got to stand on principle.”

Assemblyman Jay Obernolte, a Republican representing the largely-rural 33rd District that includes Needles, supports the town’s gun sanctuary declaration. He plans to introduce a bill in December to give more local control to rural gun owners and allow for interstate reciprocity with firearms laws.

Republicans are a decided minority in the Capitol, and the chances are low that gun-rights proponents will get a carve-out. But Teresa Trujillo, Obernolte’s chief of staff, said her boss supports more local control for the state’s rural residents.

“These people have a different culture than what’s in Sacramento,” she said. “They should be able to govern themselves with certain things and make decisions that are best for their community.”

“There’s a sense that the bigger cities kind of run things around Sacramento,” he said. “When people feel like they’re not being heard, it’s natural to respond. It’s all about feeling you have a voice in the room.”

And when it comes to hearing voices around Needles, people feel that adjacent states such as Nevada and Arizona better speak their language than Sacramento.

“We’re like an island here in Needles, completely separate from California. The closest city in the state is Blythe, and that’s 100 miles to the south, along a two-lane road,” said Terral. “We feel more of a kinship to Arizona and Nevada. I can walk to Arizona in two minutes. I can see it from my front yard. I can’t see Sacramento.”

California’s state capital lies as far away from politically conservative Needles as Atlanta is from Washington. Nobody can remember the last time a Democrat was elected to any office here in a town that voted for Donald Trump in 2016 by a decided margin.

Waitress Robbie Tieman, a 15-year food-serving veteran here, is a gun owner who lives in Arizona. She probably wouldn’t bring her gun to work. Still, she doesn’t like anyone saying she can’t do it.

“People should be able to carry their guns wherever they go,” she said, refilling a visitor’s cup with coffee. “I know bad people carry guns, but I think they’d be less likely to rob a liquor store if they knew people inside were packing their own firearms.”

At 55, Mayor Williams is a slender man who dresses in a form-fitting suits. He’s a grandfather of 13 who wants Needles to stick around so his grandkids can enjoy it.

But Williams has seen his community lose half its population since the 1960s.

To survive, he said, the place needs all the help it can get, and restrictive gun laws are driving visitors — and their money — away from town. “They’re threatening the lifestyle we’ve built here,” he said.

For his part, Terral just wants California to take its mitts off his gun, and his rights.

“They don’t let you live your life,” he said. “Legislators want their finger in every aspect. Given the chance, they’d probably have our paychecks sent directly to Sacramento, and they’d give us back what they thought we needed.”

That pet peeve hit home recently, he said, when he attended a conference in a small beach community south of Los Angeles.

“I walked down the sidewalk and I saw all the signs. You’d couldn’t smoke, ride a skateboard or roller skate. It was all no, no, no,” he said.

He was glad to get back to Needles, “where I wasn’t watching where I walked in case I broke some law I didn’t know anything about.”

Or, if you trim this story, you must run the following tagline: This is an abridged version of the full story, which is available at CalMatters.org–a nonprofit, nonpartisan media venture explaining California policies and politics.