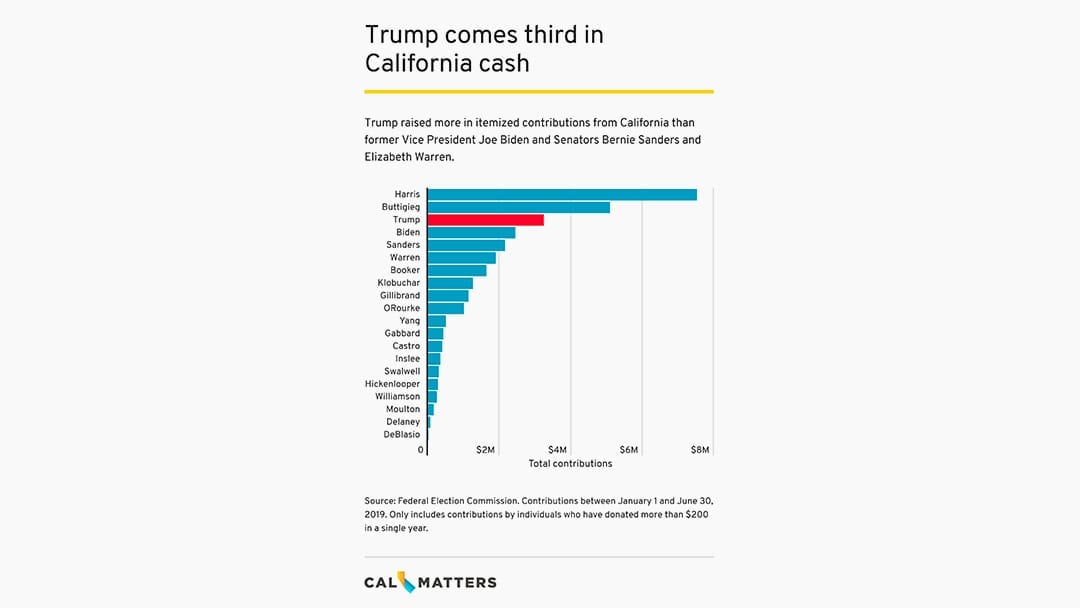 This may come as surprise to the president, the national media and more than a few Californians, but there are plenty of Trump supporters in the “Resistance State,” too. And since the beginning of the year, they’ve been spending a lot of money to keep the president in the White House.

New campaign finance statistics show that President Donald Trump raised $3.2 million—more money from the California donor class than all of his Democratic challengers, but two.

Not only that, but the Trump campaign collected more from itemized small donors—those who gave in increments of less than $100 at a time—than anyone else in the field. The president bested even Democratic contender Bernie Sanders in the small-donor sweepstakes.

But it’s not all pixie dust for Trump in California: 89% of all itemized presidential campaign donations from Californians went to contenders out to defeat him.

We took a look at how much cash those Democratic presidential candidates are raising in California—and where it’s coming from.

Since the beginning of the 2020 election cycle (which the president officially kicked off a few hours after his inauguration in 2017), Californian Trump supporters have showered $7.2 million in itemized contributions on the president. 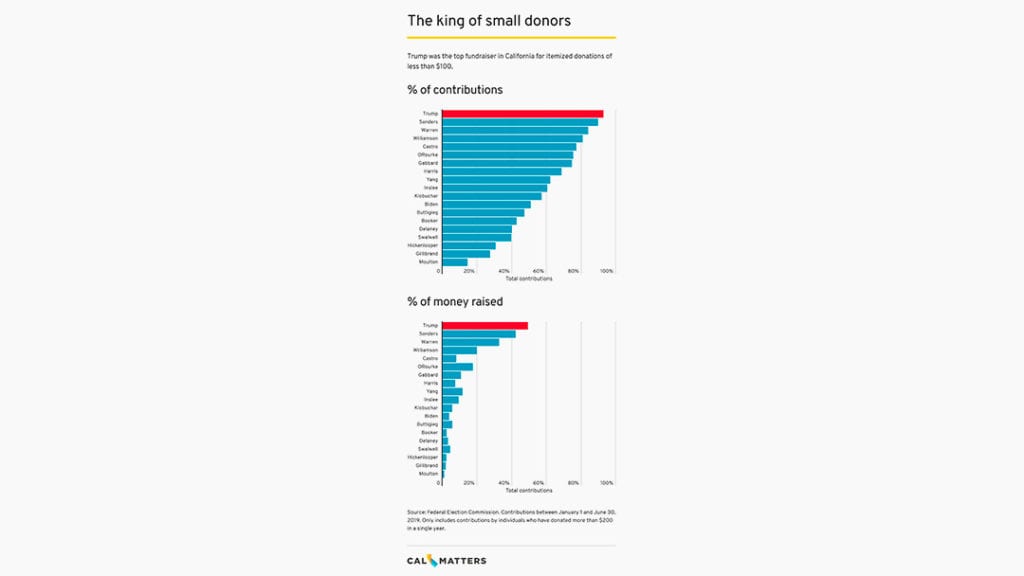 The Federal Election Commission publishes details on contributions made by any supporter who has given at least $200 in a single year. These are known as itemized contributions.

More than $3 million has come since the beginning of this year.

Trump’s 2019 haul puts him ahead of the entire Democratic field, with two exceptions. Sen. Kamala Harris has raised over $7.5 million in her home state since January 1 and Pete Buttigieg, the mayor of South Bend, Indiana, has received over $4.8 million in California cash.

Though the top Trump-giving zip codes are all clustered along the southern California coast—the wealthy enclaves of Beverly Hills, Orange County, and San Diego—the president outraised every other Democratic candidate combined in 619 zip codes across the state. That’s more than a third of all California zip codes with at least one itemized contribution.

The president has also been uniquely dependent on small donations of less than $100. They account for 93% of all itemized contributions from California, and have provided his campaign with nearly half the money he has raised in individual contributions from the state this year. 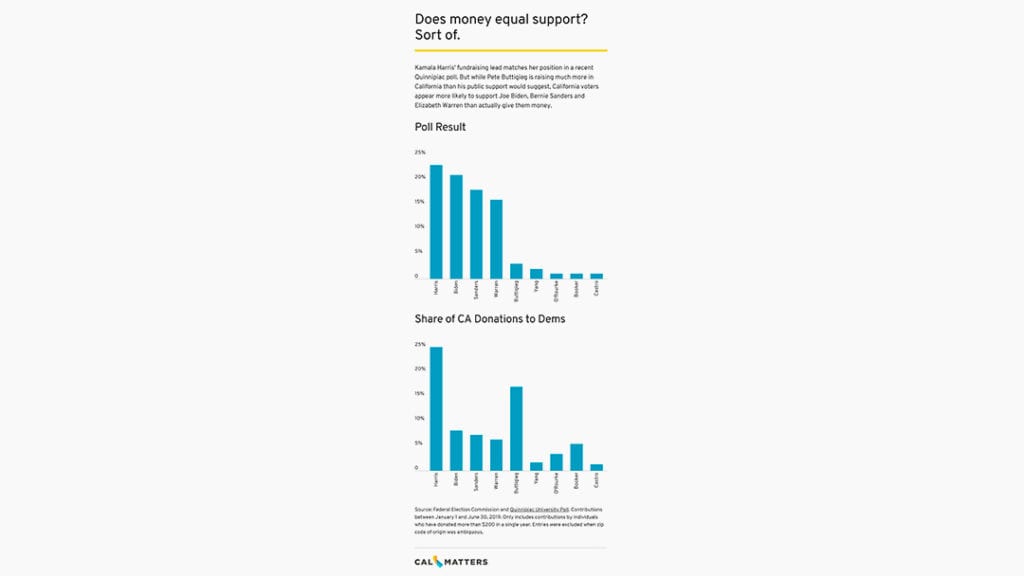 Remember that these contributions are only reported by federal election regulations if they come from donors who have given at least $200 over the course of the year. Anyone who is giving less than $100, but still showing up in these published figures is, almost by definition, a regular contributor.

Giving $25 here and $50 there, this sizable network of disaffected California Republicans is providing a steady stream of small, but reliable cash infusions to the president’s reelection campaign. Many political experts also see small donors as a good proxy for voter enthusiasm.

And no surprise, the president seems to have raised the most money in the conservative swaths of the state: the Central Valley, the suburbans segments of southern California, the Inland Empire and the rural north.

While the map may look surprisingly red given California’s solidly blue reputation, by one metric the president raised less than you might expect.

In total, Trump raised about 11% of all presidential campaign dollars in California this year. Compare that to his most recent estimated approval numbers. According to a poll put out by Quinnipiac University earlier today, 35% of California voters approve of the president’s job performance.

That’s a dismally low approval rating by any standard. But it’s also a reminder that campaign fundraising is, at best, an imperfect measure of popular support.

Case in point: the Quinnipiac poll also found that Harris and former Vice President Joe Biden were tied neck-in-neck among Democrats and Democratic-leaning registered voters in California, with Senators Bernie Sanders and Elizabeth Warren following closely behind. But among those who like to throw money at political campaigns, Harris is far-and-away the favorite here in California.

Meanwhile, Buttigieg—who outraised Harris in the second quarter of this year (though his fundraising totals were down in June)—only won the support of 3% of the survey’s respondents.

See which Democratic presidential contenders are winning the primary campaign cash scramble—in each zip code in California—with this CalMatters analysis.