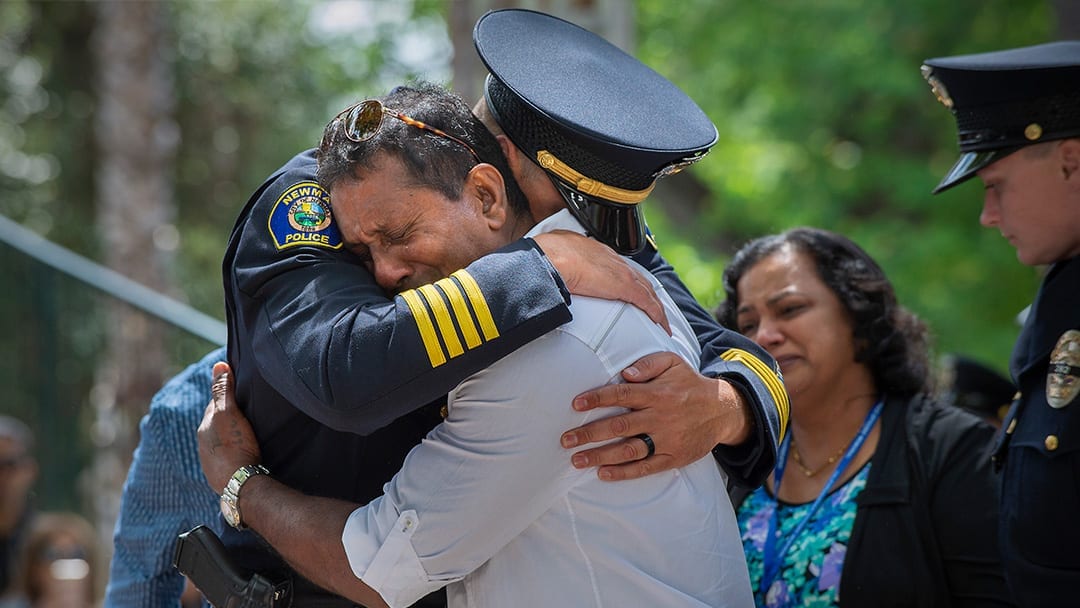 America’s embrace of civilian gun ownership makes police work more dangerous in the United States than in other developed countries, a phenomenon that in turn contributes to officers killing nearly 1,000 people each year.

That’s the conclusion Franklin Zimring, a legal scholar and criminal justice expert at the University of California, Berkeley, came to after conducting a major study of killings both of police and by police. The rate of fatal assaults on American officers is 25 times greater than on British police and 40 times greater than on German police, he found. Similarly, the rate of police shootings in those nations is a tiny fraction of what it is in the U.S.

Zimring studied attacks on American officers over six years and found that gunshots caused more than 97 percent of their deaths.

“If I am a police officer on patrol, the threats to my life that exist are almost completely, in terms of assaults, firearms,” Zimring said on Force Of Law, a CalMatters podcast about California’s attempt to reduce police shootings.

Officers know that any time they show up at a call, even the ones that seem most routine, they may face someone with a firearm. That’s what happened to Sacramento Police Officer Tara O’Sullivan, who was gunned down last month when she arrived at a house where a domestic violence victim had asked for help. And to Davis Police Officer Natalie Corona, who was ambushed by a gunman while helping at the scene of a car accident.

These occupational hazards have loomed over the Capitol as California lawmakers have debated a bill to limit when officers can shoot—legislation responding to the death of Stephon Clark, whom police shot after mistaking the cell phone he was holding for a gun. He was not armed, but most of the people police kill are holding a gun or a knife.

Law enforcement first argued against the bill, saying it would put officers’ lives at even greater risk. If they felt they had to hesitate before firing their weapons, police argued, more cops would die. After Assembly Bill 392 was amended, though, major statewide law enforcement groups stopped making that argument and dropped their opposition to the bill.

The version the Legislature passed earlier this month says police can use deadly force when “necessary in defense of human life” — and doesn’t specifically define what “necessary” means. It also says that in judging whether deadly force was necessary, authorities must use the perspective of a “reasonable officer,” echoing concepts in a landmark United States Supreme Court case that police view as a critical legal protection.

“That’s why I was able to support it,” said Assemblyman Tom Lackey, who voted against the original version of AB 392 in committee, but voted for the revised version on the Assembly floor. He’s now convinced that it won’t put officers in greater danger.

Lackey, a Republican from Palmdale, was a highway patrol officer for many years before being elected to the Legislature. On the Force Of Law podcast, he describes losing several colleagues during his law enforcement career—in attacks, crashes and suicide.

Though policing remains a dangerous profession, the rate of on-duty deaths has droppeddramatically since 1970, according to research by Michael White, a professor at Arizona State University’s school of criminology.

“Policing is a much safer profession now than it was 50 years ago,” he said, due to improvements in body armor, training and trauma care.

Hear more about White’s findings, as well as stories from Californians trying to shape legislation on the use of deadly force, in the latest episode of Force Of Law. Episode Four: The Line focuses on the dangers police face on the job.