“We’re not going to be able to survive:” Why Californians could bear the brunt of Trump food stamp cuts 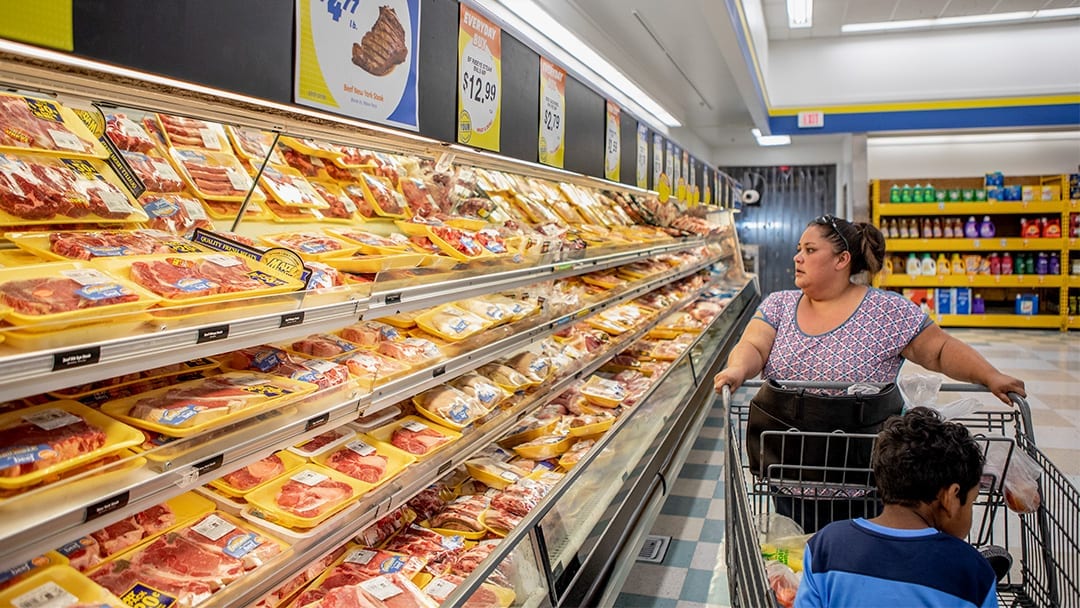 When Antoinette Martinez rolls her cart through the produce section of the FoodMaxx in Watsonville, her 5-year-old son Caden often asks for strawberries and blueberries.

Sometimes Martinez bends, but usually she sticks to the produce on sale: Roma tomatoes for 69 cents a pound, cucumbers at three-for-99 cents. And banana bunches are relatively cheap.

“If it’s not under a dollar then I don’t buy it,” Martinez said, bypassing $2 lettuce as Caden clambered into her grocery cart. “It’s about stretching the dollar.”

The food budget isn’t as tight as it used to be since Martinez, a single mother, got a job at the Second Harvest Food Bank in Santa Cruz County. She helps people sign up for food stamps, known in California as CalFresh.

Between her $2,380 monthly paycheck and about $100 she receives in CalFresh, Martinez can make it through the month without her or Caden ever going hungry.

But under a new proposal from the Trump Administration, Martinez and her son would lose their food stamps. So would many clients she helps at the food bank, along with an estimated 3.1 million Americans.

Californians are likely to be hit particularly hard. Here’s why:

The proposed rule, announced last week, would undo the ability of states to provide food stamps to households that have incomes above the federal food stamp limit—130% of the federal poverty line—but hefty expenses.

That would have the biggest impact in states like California that have raised the minimum wage to try to chase the skyrocketing costs of housing. As California’s minimum wage creeps towards $15 per hour by 2023, many more workers could be bumped off food stamps when their monthly incomes rise above the federal limit. 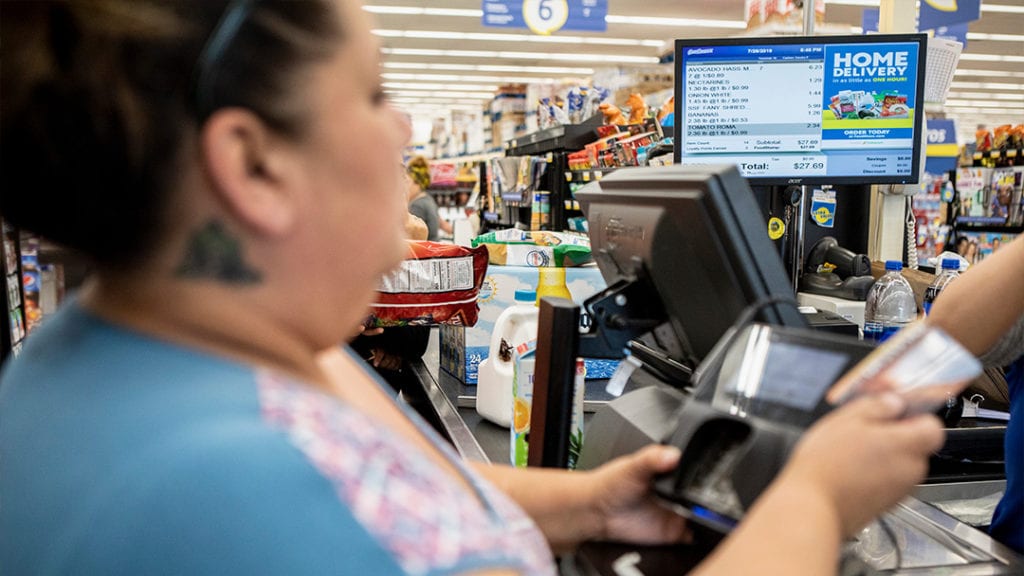 Under current law, a California family of two with a gross monthly income between 130% and 200% of the federal poverty level—or between $1,784 and $2,744—can qualify to receive CalFresh as long as their net income after housing, childcare or medical costs falls under 100% of the poverty level, or $1,372.

For now, Martinez falls right into that bracket.

The rule would also cut the benefit for families who have savings or assets above a federal limit that many states, including California, currently waive. That limit—$2,250 for most families—is only slightly over the median monthly rent for a two-bedroom apartment in California ($2,110) and about half that of a two-bedroom in San Francisco ($4,730).

“It’s clear that states like California are a target on this,” said Jessica Bartholow, a policy advocate for the Western Center on Law and Poverty.

U.S. Secretary of Agriculture Sonny Perdue said that the proposal to eliminate what he called a “loophole” would reduce fraud and save the federal government money—more than $9 billion over the next five years, according to a federal estimate. The proposal could go into effect following a 60 day public comment period.

“Our job is to make sure folks have the tools they need to move away from (food stamp) dependency… and preserve the benefits for those most in need,” Perdue said.

But advocates counter that the move would largely cut benefits for working families who spend large chunks of their paychecks on housing and care-taking costs for young children or ill or disabled family members.

“There’s actually no evidence that making someone hungrier makes them less dependent on public benefits. And there’s plenty of evidence showing the opposite,” said Bartholow.

The Western Center estimates that some 250,000 Californians could lose CalFresh, based on estimates made when California expanded eligibility in 2008 under Republican Gov. Arnold Schwarzenegger and again in 2013 under Democrat Gov. Jerry Brown. 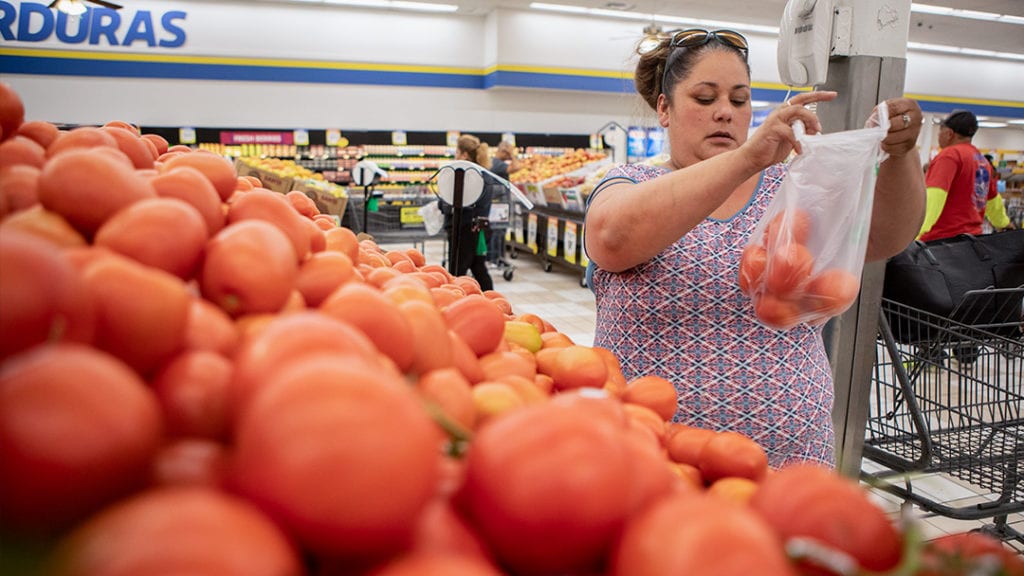 Additionally, children in those families could lose automatic eligibility for free lunches at school.

The proposal to cut food stamps is the latest in a series of Trump administration initiatives to curtail government benefits for low-income people, including a rule that would tighten food stamp work requirements, another to block some legal immigrants from getting a green card if they are deemed likely to use public services, and another to adjust the way the federal poverty measure is calculated.

Those other proposed rules have cleared their comment periods, but the Trump administration has yet to impose them.

Opposition from California’s Democratic leaders to the latest proposal was swift and predictable.

“There is not a state in the country that is probably more aggressive in pushing back from a litigation perspective, so that will be analyzed by the lawyers,” Gov. Gavin Newsom told CalMatters. A spokesman for Attorney General Xavier Becerra, who has sued the Trump administration over 50 times thus far, said his office was reviewing the proposal. (CalMatters is  tracking those lawsuits here.)

U.S. Rep Jimmy Panetta, who represents Martinez’ district, sent Secretary Perdue a letter, signed by 45 California Democrats in Congress, asking that he “take into consideration the harmful effects of this proposed rule and act quickly to rescind it.”

Martinez knows the feeling of hunger well. For many years, she said, she was homeless, battling addiction and mental illness.

“When I was homeless… there was no place to eat,” Martinez said. “I wasn’t really too sure where to go.”

She recalled what happened next: She got pregnant, enrolled in CalFresh and was finally able to count on a steady source of food. Then she entered an intensive program to help homeless people get back on their feet.

Martinez and her son have now been housed for two years. She said she’s close to finishing her associate degree in human services at Cabrillo College and dreams of being a case manager for a non-profit, helping others battle addiction and poverty.

She worries about what the food stamp proposal would mean for her and her growing son. But she said she’s also concerned about the rest of the community she serves in Santa Cruz.

Within the county, 21.7% of residents live in poverty, the third highest rate in the state after Los Angeles and Santa Barbara counties, according to new data from the Public Policy Institute of California.

“CalFresh is the first line of defense against hunger; the food bank is the second,” Martinez said. “We were barely surviving but we’re not going to be able to survive if (President Trump) continues to push this.”

Jackie Botts is a journalist at CalMatters working for The California Divide, a collaboration among newsrooms examining income inequity and economic survival in California.