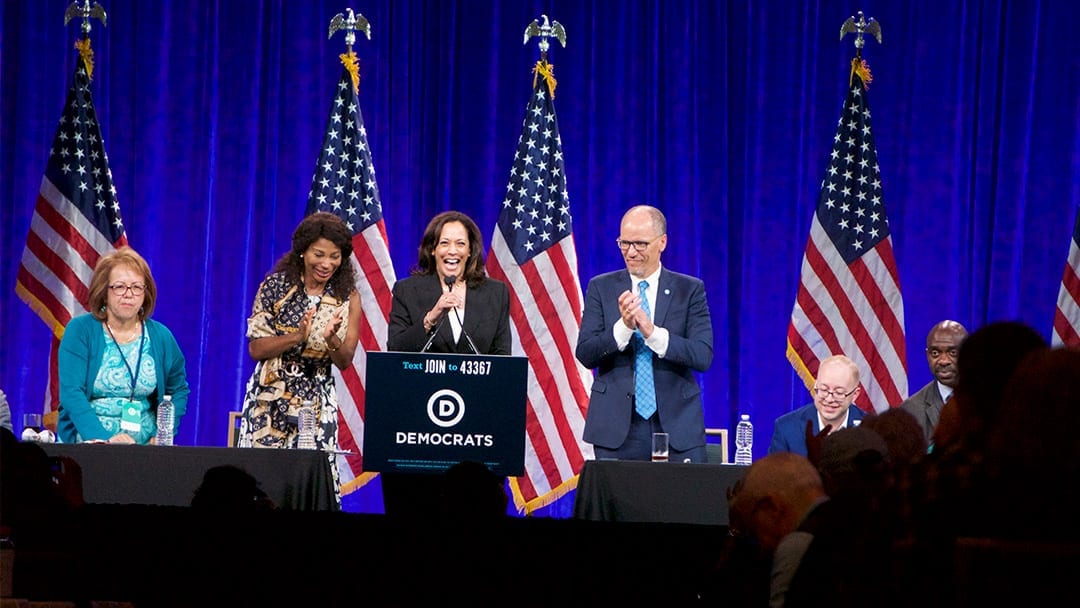 When presidential candidates spent time in Iowa (and they spend a lot of time in Iowa), they are expected to ingratiate themselves to the state’s 2.1 million registered voters by chowing down on deep fried foods and spending plenty of time talking about grain growing, trade policy and corn ethanol.

With California Democrats now scheduled to pick their preferred party’s nominee on March 3rd (at the latest; those who vote from home can cast their ballot as early as the Iowa Caucus) there was hope that the Golden State might finally earn itself some presidential pandering too.

So what is the political equivalent of corn ethanol in California?

Ryan was in at the Democratic National Committee summer meeting in San Francisco last week with 11 of his fellow aspirants for the White House.

The Democratic gathering allows party movers-and-shakers to set party rules for future elections, and gave presidential contenders the chance to make a good impression on a nationwide swath of party leaders all in one place.

With a dozen presidential hopefuls passing through the San Francisco Hilton (and a few notable no-shows like Joe Biden and Pete Buttigieg sending videos instead), there was scant mention of California-specific topics. Every candidate stuck to his or her stump speech. California Sen. Kamala Harris spoke of “prosecuting the case” against President Trump, New Jersey Sen. Cory Booker waxed Obamesque as he dared the crowd to dream “dangerous dreams,” Vermont Sen. Bernie Sanders spoke of the billionaire elites and Massachusetts Sen. Elizabeth Warren called for “structural change.”

None of them broached topics such as wildfires, the Gilroy shooting, police use-of-force legislation, housing policy, water or any other issue that might remind the Democrats in attendance that they were, in fact, in California.

That may suggest that despite its new place on the calendar, Californians will not “drive a different agenda at the national level,” as California Insurance Commissioner Ricardo Lara, who wrote the bill to bump up the state’s primary when he was in the state Senate, predicted in 2017.

“I don’t think most candidates think that what plays in California is necessarily what plays in other states early in the process,” said John Pérez, a former speaker of the state Assembly and a current party delegate from California. “But what I think will happen is that candidates who are serious will be more aggressive about going to parts of California they haven’t gone to.”

In other words, he said, not just the places that are rich with donors, but the Central Valley, the Inland Empire and the north of the state.

“I think that will be important for California to have all the different voices from around the state heard in a more meaningful way,” he said.

And a few White House hopefuls have staked out a pro-labor position on the huge fight underway in Sacramento over pending legislation to change how “gig” workers are treated by companies such as Uber.

Nonetheless, Californians will never be as thoroughly buttered up by presidential hopefuls as are voters in Iowa or New Hampshire. The state’s size make a certain kind of retail politicking logistically and financially impossible.

And the state has tried this experiment before with inconclusive results, said Terje Anderson, chair of the Vermont Democratic Party.

“In 2008 California was also on Super Tuesday,” he said, referring to the first round of primaries after the designated early voting states of Iowa, New Hampshire, South Carolina and Nevada, in which over a dozen states hold their primary elections on the same day.

“Obama lost California, but he still got the nomination,” he said. In other words, even with its 495 delegates, California’s vote is not determinative.

Even so, Tom Steyer, a billionaire latecomer to the presidential race, hopes California’s early position this year will be a boon for a candidate who calls the state his home.

No, not that one.

“California has the most delegates, it’s a relatively early state, and therefore it will have a big impact, not just in terms of how delegates are apportioned, but in terms of who could possibly end up being the nominee,” he said.  “And as a Californian I’m very grateful for once that (candidates) will come to California and actually talk to people about what they stand for instead of just coming for money.”

One exception came from House Speaker Nancy Pelosi, who welcomed the crowd to her San Francisco district by imploring them to get along: “In San Francisco, love means “let other versions exist.’”

That few of the candidates were focusing on their host state last week was in keeping with the national, big picture theme struck by Democratic National Committee chairman Tom Perez . He reiterated throughout the week that the party needed to remain unified and singularly focused on ousting the current president.

“All of our candidates share the same values,” he said at a fundraising gala at San Francisco’s Fairmont Hotel on Thursday night, foreclosing any intraparty hostility likely to break out between the candidates and their supporters. “Our job is to win elections. If we want to change this country, we must first win elections.”

In an election in which beating Donald Trump is the primary agenda item, there may be a limited role for state-specific policy concerns. And unlike a certain midwestern state, California may be a bit too big and a bit too diverse to pander to with a specific policy area.

California is just “a microcosm of the country in a lot of ways,” said Ryan. “We’re all dealing with the same stuff.”