Getting Food Stamps to Poor Californians is Surprisingly Difficult 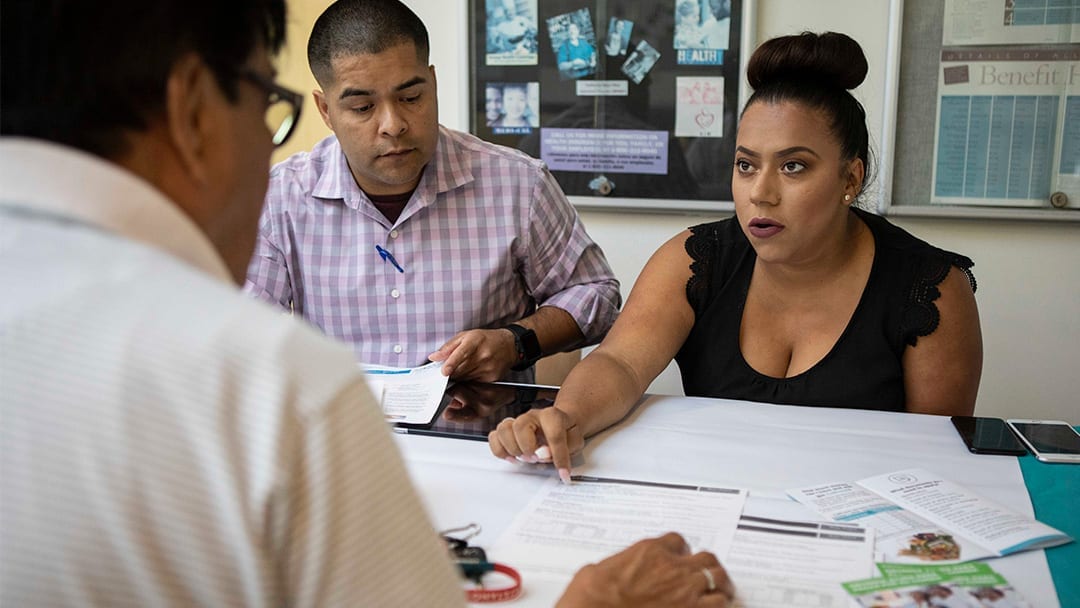 By Jackie Botts | CalMatters and Cresencio Rodriguez-Delgado, The Fresno Bee

In May 2017, the Los Angeles County Board of Supervisors set an ambitious goal: enroll 70,000 new families in food stamps in two years.

Home to the state’s highest poverty rate and a growing homeless crisis, the county was enrolling just 69% of residents who were eligible for CalFresh, the state’s name for the federal food stamps program. With full participation, the county would have been expected to gain $560 million in federal funding for its poor.

The social services department got to work, doubling down on outreach, simplifying the application process with new technology, and producing data-driven progress reports each month.

“At the end of the day, we only got 3,000 new (households). And that was a lot of work we did,” said Antonia Jiménez, director of the Los Angeles Department of Public Social Services.

California has long struggled to get food stamps to the hungry. The state enrolled just 72% of eligible residents in CalFresh in 2016, the fifth lowest rate in the nation, leaving behind about $1.8 billion in federal funding earmarked for the hungry.

Increased scrutiny on the participation gap has prompted a debate among state leaders over how much improvement can be gained by pressuring counties to be more efficient and how much will depend on more money for county eligibility workers. 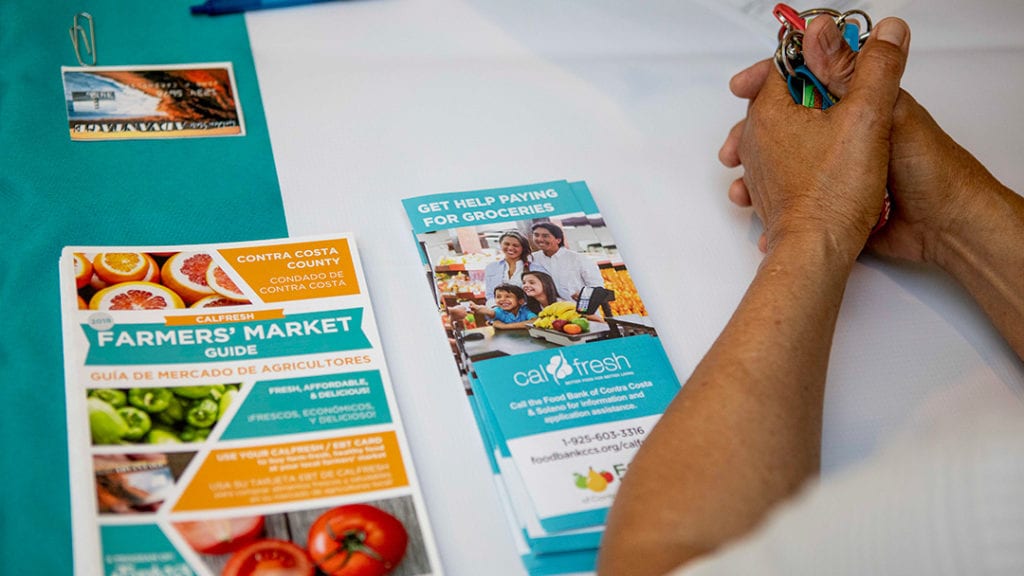 A man learns how he can apply for CalFresh, the state’s food stamp program, at an outreach event in Contra Costa county. Photo by Anne Wernikoff for CalMatters

California is one of only 10 states that manage the food assistance program at the county level, with a wide range of application procedures, technologies and staffing levels. Senator Scott Wiener, a San Francisco Democrat, said the root of the state’s participation gap is an application process that varies from “incredibly easy” to “unnecessarily complicated and onerous,” depending on which county you live in.

“It’s really all over the map and short of transferring responsibility of the program to the state, which would be politically very difficult, we should at least have statewide standards in terms of streamlining the application process and improving awareness among our residents,” he said.

A bill by Wiener would have set a goal for California to enroll 95% of eligible households by 2024, but didn’t survive a committee vote on Friday. The legislation would have required the state to oversee improvement plans and provide technical assistance to the state’s 58 counties, while counties would be required to offer applications entirely over the phone. But it included no money for eligibility workers.

As the experience in Los Angeles and other counties suggest, however, increasing efficiency alone may not be enough to achieve the state’s goal. County and state officials, including Wiener, say more state funding is needed.

The state’s 2019-2020 budget to administer CalFresh was $639 million. Kimberley Johnson, the newly appointed director of the California Department of Social Services, said she will revisit the way CalFresh is funded in next year’s budget.

“It’s one of our huge safety net programs that we know makes a difference at disrupting poverty and that’s critical, so it’s certainly a priority of ours,” she said.

The demand for increased funding comes even though California already spends more on administrative costs for food stamp programs than nearly every other state, according to a recent federal study.

Each California food stamp case cost $808 to administer in 2016, compared to the national average of $348. The study also found that states in which counties run the program spent 24% more per case than other states, after controlling for economic, demographic, and policy differences.

Frank Mecca, executive director of the County Welfare Directors Association of California, said California is simply a much more expensive place to do business. “California is one of the highest cost places in the country,” he said. “Our salaries are higher, the cost of living is higher, workers get more humane benefits.”

Mecca also said the state estimate that each CalFresh eligibility worker should cost $58.27 per hour, including salaries, benefits and overhead costs, is out of date. The association calculates that counties currently pay about $105 per hour.

The two counties operate their CalFresh programs in the same old-school way. The application involves three separate steps—answering lengthy questions, providing documentary evidence, and participating in an interview during business hours. It takes days to weeks to complete. Neither county has a telephone-only application. And both assign interview times that may or may not conflict with applicants’ schedules. 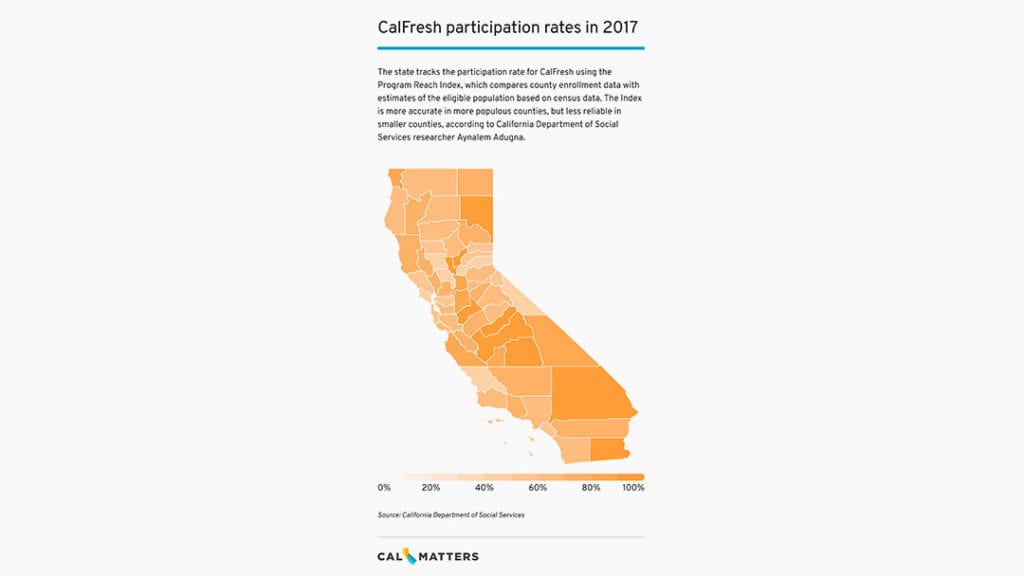 Yet Fresno County enrolls about 90% of its eligible population in CalFresh, while Contra Costa enrolls less than 60%, according to state data averaged across 2015 through 2017. With full participation, Contra Costa would have been expected to receive an additional $67 million in federal funds for hungry residents in 2017.

Staffing data from the two counties indicates that Fresno has about 1.6 CalFresh workers per 1,000 people eligible compared to just under 1 per 1,000 in Contra Costa, based on state estimates of the eligible populations in 2017.

Mecca cautioned that the state’s participation rate data are imperfect and don’t reflect gains made by counties over the last two years. Kathy Gallagher, director of the Contra Costa Employment and Human Services Department, also warned that comparing staffing levels is misleading because the two counties have different business models and client needs. But she acknowledged Contra Costa’s program is understaffed.

Recently, Gallagher said the county had more than 100 CalFresh interviews scheduled out more than a month, out of compliance with the state’s requirement that eligibility be determined within 30 days of an application.

County resident Eduardo Mendoza, 66, applied for CalFresh in mid-July, but his interview was scheduled for mid-October. Until then, Mendoza said he would continue getting daily free meals at a local soup kitchen.

Mendoza became eligible for CalFresh in June after state lawmakers voted to make the program available to recipients of Supplemental Security Income (SSI), an assistance program for the elderly and disabled. The expansion made 500,000 more people eligible for the program statewide and overwhelmed Contra Costa.

For years, advocates have implored the county to upgrade technology, increase outreach, and above all, hire more staff. A 2015 grand jury report on the county’s underutilization of CalFresh recommended the same.

Counties pay 15% of administrative costs for CalFresh while the state pays 35% and the federal government pays the rest. Each county’s budget is also based on last year’s CalFresh enrollment rather than the total number of eligible people in a county, leaving struggling counties with limited resources to close the gap. 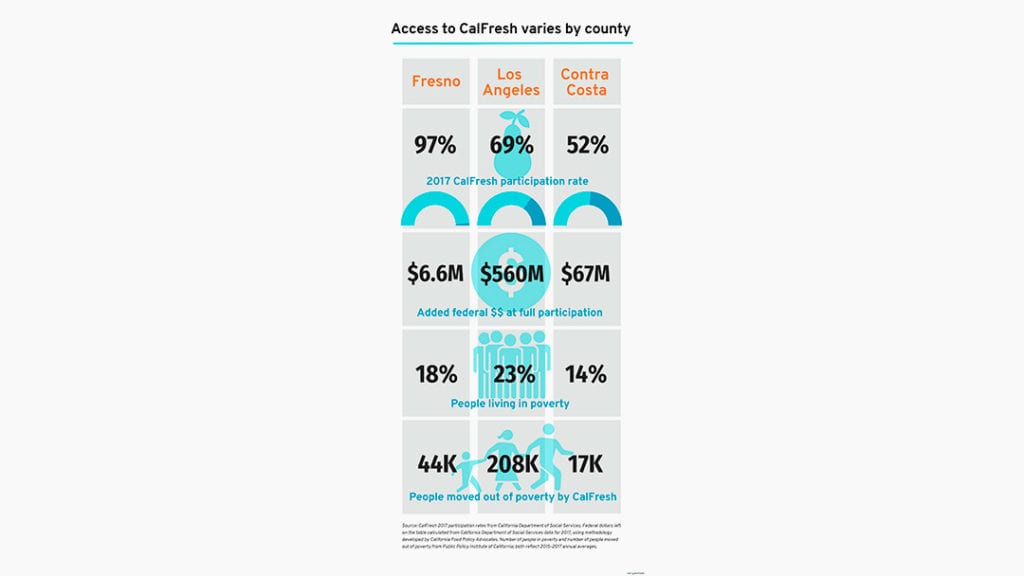 Gallagher said, unlike Contra Costa, other Bay Area counties set aside additional money to support CalFresh to keep up with the high costs of the area. Meanwhile, Contra Costa, struggling with tight budgets and a hiring freeze, didn’t pay its full 15% share of administrative costs in several recent years, reducing the amount of federal and state matching funds it received.

“I think Contra Costa is in the position of many other counties that don’t have local revenue measures that supplement their property tax,” John Gioia, chair of the county Board of Supervisors, said. “Contra Costa County relies on state funding … but the state funding is really not sufficient to do the best job.”

In Los Angeles, county supervisors hoped to add 70,000 new households over two years by increasing efficiency without adding more money. If it had been successful, the Los Angeles participation rate might have grown from 69% to 80% and the county’s poor would have been expected to gain an additional $201 million in federal assistance.

Jiménez speaks proudly of the changes she made. The department mailed people on Medi-Cal, the state’s health insurance for low-income residents, an estimate of their CalFresh benefit if they applied. It targeted outreach to students. It rolled out a new one-and-done call center which allows some people to finish the entire application in a single phone call. It also began texting reminders to people to submit their semi-annual recertification reports.

The county processed 899,000 CalFresh applications over the two years, but nearly as many families dropped off. One lesson learned: “It wasn’t really getting people in the door that was the problem, the problem was keeping them in the system,” Jiménez said.

Despite adding just 3,000 additional households, county officials say the program was a partial success. One reason is that the number of eligible households dropped statewide during the period because of the strong economy. Had the county kept pace with the state’s enrollment decline, over 40,000 households might have unenrolled over the two years.

Also, officials say the specter of a Trump administration proposal that would jeopardize green cards for legal immigrants deemed likely to use public assistance caused immigrant families to opt out of public benefits. They expect that chilling effect will grow after theTrump administration announced the final so-called “public charge” rule in August (California filed suit against the government days later).

What would it have taken to hit Wiener’s goal of a 95% participation rate? Way more staff, Jiménez said. “But you know, to be honest, I don’t believe in arbitrary goals.”

Even in Fresno, with its high participation rate, Department of Social Services deputy director Linda Du’Chene said her CalFresh program is “grossly underfunded.”

The West Fresno Family Resource Center, a community group that helped more than 700 families sign up for CalFresh in 2018, drew over 200 families to its 17th annual back to school event in early August. Organizers kept track of attendee data like primary language spoken, ethnicity, and participation or eligibility in CalFresh. Over 100 families showed a need, according to executive director Yolanda Randles.

“Despite what folks are saying about the economy being great, there are families still suffering,” Randles said. “To be able to go to the grocery store and purchase food, I can’t tell you the impact that has on families.”

Jerrene Richardson, a 20-year-old college student, began her application at the event. Unemployed and living alone, Richardson said she hoped CalFresh could help her move a step closer to being independent.

“I really want to be able to get my own food without any trouble,” she said.

Header Photo: Elizabeth Ambriz, an outreach worker for the Food Bank of Contra Costa and Solano, helps a man sign up for CalFresh in a Pittsburg health clinic. Photo by Anne Wernikoff for CalMatters