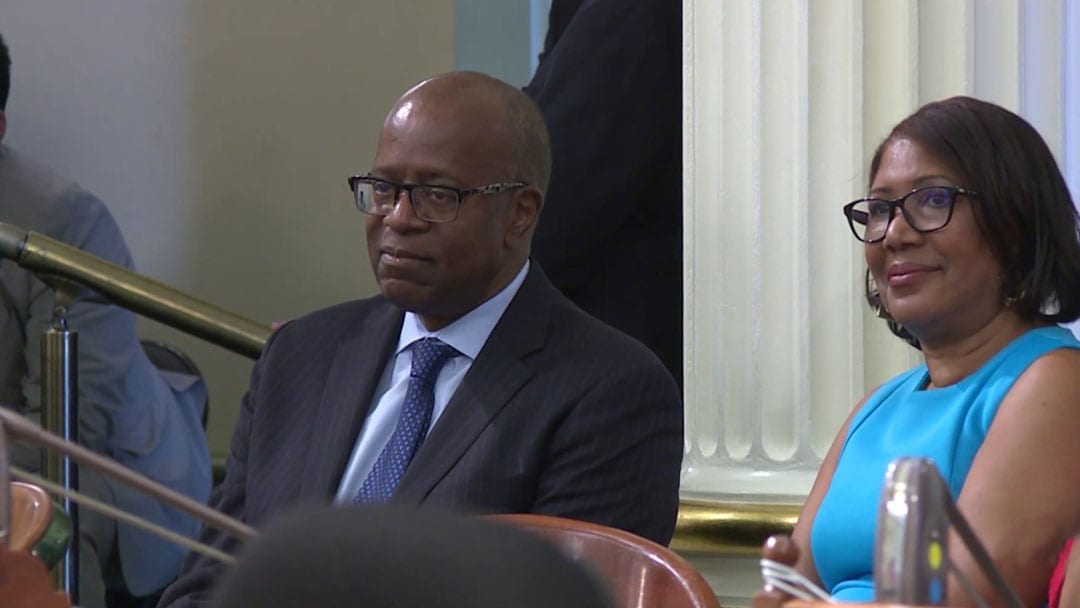 On January 6, 1992, the California Assembly elected E. Dotson Wilson as its Chief Clerk and Parliamentarian.

The Berkeley native made history that day, becoming the first African American to be voted into that all important, non-partisan role at any legislative body in the United States.

Since then, he has been re-elected to that office every two years by all 80 members of the state Assembly for 26 back-to-back terms.

“It has been an honor working for the Assembly,” said Dotson, who is retiring this month. “I am humbled to have had a front row seat as policy is being made in the world’s fifth largest economy. California has always been at the forefront of policy change in the United States.”

When the state Assembly held a special tribute on the chamber floor August 29, to thank him for 27 years of service as Chief Clerk, Wilson had gained another history-making notch on his belt. The 64-year-old, who now lives in the Sacramento area, is currently the longest-serving Chief Clerk in the history of the state of California.

“He has given us the gift of his wisdom, expertise, acumen, temperament and deep commitment to fairness over the decades,” said Assembly Speaker Pro-Tem Kevin Mullin (D-San Mateo). “Institution above party. Service above self.”

Later that evening, the California Legislative Black Caucus hosted a reception at the Grand Sheraton in Sacramento to recognize Wilson’s service to the Assembly and the inspiration he has provided to countless African-American elected officials and staff members.

Almost everyone CBM interviewed for this article mentioned the example of professionalism Wilson set for colleagues at the Capitol.

“Your name will take you places, because of your integrity,” said Assembly Shirley Weber (D-San Diego), chair of the Legislative Black Caucus. “You can’t buy it, you can’t market it, its who you are. And your name speaks volumes in this house and across the nation.”

Wilson first joined the California Assembly as a fellow in 1979. He worked his way up to deputy chief of staff for former Assembly Speaker Willie Brown, Jr., who served in the lower house’s top leadership role for 15 years and later became the first African-American mayor of San Francisco in 1996.

“He was one of the greatest politicians in the history of the state, said Wilson, talking about his experience working for Brown. “You’re only as strong as the people’s whose shoulders you stand on and Willie Brown is one of those people for me. At the time California was going through a lot of social and political changes and Brown showed extraordinary leadership.”

Wilson says Brown is one of those Californians who does not get enough credit – “ not only for his broad knowledge of the, law but also his razor-sharp understanding of policy.”

Wilson, who grew up in Albany near Berkeley, says, from childhood, he has always been fascinated with history, law, the legislative process and how they impact ordinary people.

“I was not old enough to be a part of the civil rights movement,” says Wilson. “But growing up in the Berkeley area, I got to see a lot of that activism and the change that followed up close.”

Wilson retells a story his parents told him about not being able to buy a house in the 1950s because there were laws in California that allowed sellers to discriminate against people based on race and religion. Then the legislature passed the California Fair Housing Act (AB 1240), also known as the Rumford Act, that outlawed that practice.

“That to me, as a young person, was a turning point,” says Wilson. “That’s when it was clear to me that politics and the fight for civil rights and equality were all intertwined.”

During his 27 years as Chief Clerk, Wilson worked with about 500 Democrat and Republican elected lawmakers, overseeing a staff of 30. He made sure members followed parliamentary procedure and that the legislative process ran smoothly, efficiently and fairly. He was also in charge of publishing all official documents of the Assembly and keeping a record of all bills and proceedings.

For Wilson, one of the most important ways a leader can make an impact is to “reach back” and mentor others.

“As African Americans, it is critical to help others grow professionally,” says Wilson. “Be an example. Provide leadership. Share advice. I grew up in a household where education was the focus. And my mom was one of the first Black teachers in Berkeley. She always emphasized that her job was not only to educate young minds, but to also equip them so that they can mentor others down the road.”

The Assembly elected its first Chief Clerk in 1849. Wilson was the 37th person elected to the office, which is one of three elected non-member positions in the legislative body. The other two are chaplain and sergeant-at-arms.

Over his years of service, Wilson says it has been remarkable to watch landmark legislation pass in the Assembly and to see how much the demographics of the legislature has changed in terms of race, gender, ethnicity and even political ideology.

“To see more diversity in the make-up of the membership is the most significant change I’ve seen,” he says.

And for young African-Americans in government, Wilson has some mentoring advice.

“Always operate from a place of integrity,” he cautions. “You’ll benefit from it.”