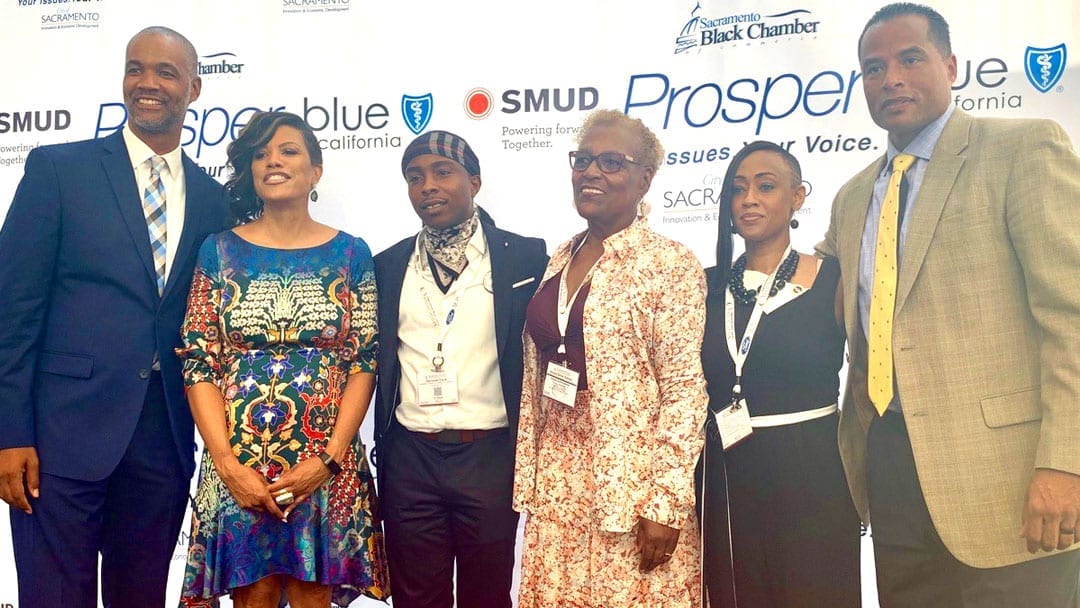 I jumped on the mayor’s desk, I had a few bizarre interviews on CNN, I did a lot of cussing out of our officers,” said Stevante Clark, a Sacramento-based rapper-turned-activist. He was talking about experiencing Post Traumatic Stress Disorder after police officers shot his brother, Stephon Clark, eight times, killing him in the backyard of their grandparents’ home in March 2018.

“I did a lot, but that’s not who I am,” Clark continued. “Those are situations that happened because of the death of my brother who I was close to, and I didn’t know how to respond. I didn’t have the resources. My mental health was affected by my brother’s death.”

Clark was speaking during a panel discussion titled “Bridging the Gap: Creating Policy for Sustainability in Underrepresented Communities,” held September 12, during the 2019 Congressional Black Caucus Legislative Conference. The Black Caucus held its annual conference at the Walter E. Washington Convention Center in Washington, DC, from September 11-15.

Organized by the Sacramento Black Chamber of Commerce (SBCC), the panel discussion drew guests from all over the country. They came to see officials, leaders and activists from California participate in a lively and thoughtful discussion about African-American life and well-being in Sacramento. The panelists dove into various ways public safety, mental health and public policy all rub against each other and impact the lives of Blacks in California’s capital city.

Even though Sacramento is fairly diverse and there are African Americans residing in different areas of the city, the majority of Blacks live in neighborhoods on the city’s south side.

“I’m proud to have been a part of the early discussions about how we can share what’s going on in Sacramento – the challenges and successes we’ve had over the years – with our congressional leadership,” said Larry Lee, president and publisher of the Sacramento Observer, the capital city’s largest African-American newspaper. The 50-year-old publication is also the oldest Black newspaper in Sacramento.

The SBCC put on the event, says its president, Azizza Davis Goines, to effect change in the city’s most under-served communities.

“We know what we need. And we are discovering that we know how to convene the resources committed to working with us,” she said.

Lee, who is also the former board chair of the SBCC, joined other Sacramento leaders for the discussion, including Daniel Hahn, the city’s first African-American police chief who is a native and grew up in one of the city’s toughest neighborhoods. Hahn took over the police department in August 2017, only seven months before officers on his squad killed Clark.

“There’s a reason we sat them next to each other,” Lee said, half-joking but explaining that the SBCC deliberately put Clark and Hahn side-by-side on the panel. Their seating easily symbolized the steps Sacramento is taking to build trust and break down the barriers that exist between police officers and residents of the city, particularly in neighborhoods that are predominantly poor and minority.

William Jahmal Miller, director, Corporate Reputation and Thought Leadership at Blue Shield of California and Jamilia B. Land, a human rights activist and children’s mental health advocate, were the two other panelists.

Stephanie Rawlings-Blake, former mayor of Baltimore, moderated the panel discussion. She stressed the importance of leaders and investors finding out what people need instead of imposing solutions on them, even when they mean well.

“It frustrated me when I was in public office. It seemed the people with the resources to do a lot of things hadn’t had one conversation with the community,” she said. “They just had big ideas. I welcome investment in our communities, but I always encourage people to make it about the people you serve – and not about yourself.”

For Miller, creating sustainability in Sacramento’s communities of color requires a shift in thinking from managing problems “downstream” to preventing them “upstream.”

“Sustainable communities that are built to last are socially strong, economically strong, geographically strong, politically strong and engaged, and their amenities are conducive to healthy living,” he said. “Community trauma results in structural inequities such as violence, such as failing schools.”

In many ways, Sacramento is ahead of the nation when it comes to innovative policing that focuses less on force and punishment and more on intervention and building relationships with communities. Since Hahn took the helm of the police department, he has taken a number of steps when it comes to recruiting, training, policy and equipment to make his officers less biased and the department more accountable. The Sacramento police department has now increased the use of less lethal Bean Bag rounds and PepperBall launchers as well as Tasers and body cams for all officers.

Every cop in the city now has to take implicit bias training at UC Berkeley, and a program called “Walk in My Shoes” pairs officers with members of the community who spend time on duty with cops. There are also community service programs, neighborhood “Peace Walks” and other relationship-building and recruitment programs in the city’s African-American neighborhoods.

Clark, for instance, attended a class Hahn introduced called the Transformational Police Model. In it, police officers and community members sit in a room together, learn the course material and exchange perspectives.

Several companies in Sacramento have stepped up to support the prevention work Hahn and the SBCC is doing, including Blue Shield of California and SMUD, the city’s main power company. The community-owned, not-for-profit utility also sponsored the panel discussion.

“We are excited to be a partner of the Black Chamber,” said Jose Bodipo-Memba, Director of Sustainable Communities at SMUD. “We don’t want one-time hits. We are trying to find ways communities can thrive overall. We’re focusing on social well-being, health and environment.”

In Sacramento County, where Sacramento is the largest city and county seat, the African-American population is about 14 percent (a little over 68,000 people). Blacks in the county have the highest unemployment rate of all races at 15.9 percent and a poverty rate of 26.5 percent, according to “The State of Blacks in California,” a report commissioned by California Black Media. Only 21 percent of African-American adults have bachelors degrees.

All the panelists praised the progress Sacramento is making but acknowledged that more work needs to be done.

“As African Americans, we have to take responsibility for ourselves,” said Land, who stresses that, for her, racism is a mental health disease that impacts everyone and stacks up systemic odds against minorities. “While we, often times, want to challenge others to be transparent and to be accountable, we often times fall short of doing that ourselves.”