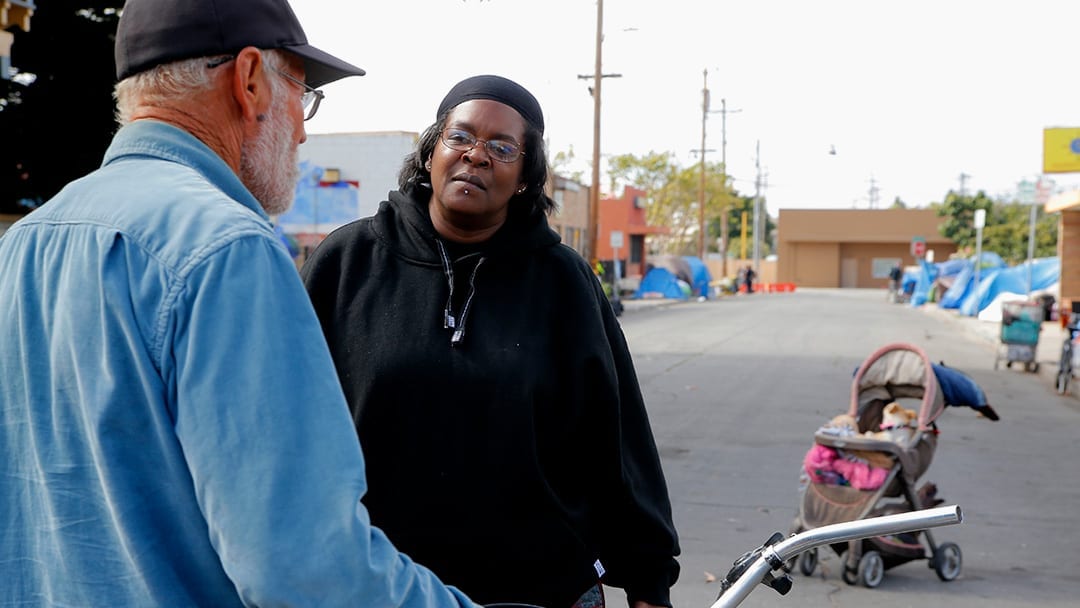 By Kate Cimini | The Californian

Just a few years ago, Yolanda Harraway was living in a tent on the streets of Chinatown in Salinas, an agricultural hub struggling with a growing homeless community.

Harraway’s slide into homelessness began when her son was taken from her custody by Child Protective Services. She struggled with addiction and had several felonies on her record, which cut her off from various state and government-funded housing options. She also had a hard time holding a job — once her background check came back, she would be let go, time and again.

Harraway, who is black, has since found permanent housing, earned her high school diploma and sobriety. Yet, experts say the problems she encountered are more prevalent among black people and can lead to or perpetuate homelessness.

A new homeless census carried out nationally shows that black people are greatly over-represented in the homeless population across the United States.

In Monterey County, the percentage of black or African American people who are homeless is more than seven times higher than the county’s black population. It is nearly six times higher at the state level.

While only 3.5% of people living in Monterey County identify as “black or African American,” 25% of the county’s homeless population identifies as such, according to the homeless census, also known as the Point-in-Time Count.

And across the state, the U.S. Census shows about 6.5% of Californians identify as black or African American, but they account for nearly 40% of the state’s homeless, according to a Department of Housing and Urban Development report to Congress. Nationally, black people account for 13.4% of the population but are 39.8% of the homeless population.

A September report from Los Angeles Homeless Services Authority (LAHSA) indicates institutional racism plays a large role in the extreme over-representation of homelessness of all people of color.

“Black people are more likely than White people to experience homelessness in the United States, including in Los Angeles County,” the report says. “…The impact of institutional and structural racism in education, criminal justice, housing, employment, health care, and access to opportunities cannot be denied: homelessness is a by-product of racism in America.”

In Monterey County, estimates from the homeless census show the black homeless rate more than doubled from 2017-2019, growing from 12% of the population to 25% in that time. The numbers surprised local officials, some suggesting the count might have been at fault, as it is an imperfect snapshot.

“It is carried out in the dark, of a population that does not want to be seen,” said Elliott Robinson, interim executive director of the nonprofit Coalition of Homeless Service Providers.

Furthermore, the count is often carried out as unobtrusively as possible, meaning census takers, most of whom are volunteers, may guess at the race or ethnicity of homeless people so as not to wake or frighten them, he said.

However, in that same amount of time, Los Angeles County showed a large growth in its black homeless population as well, increasing 22%. 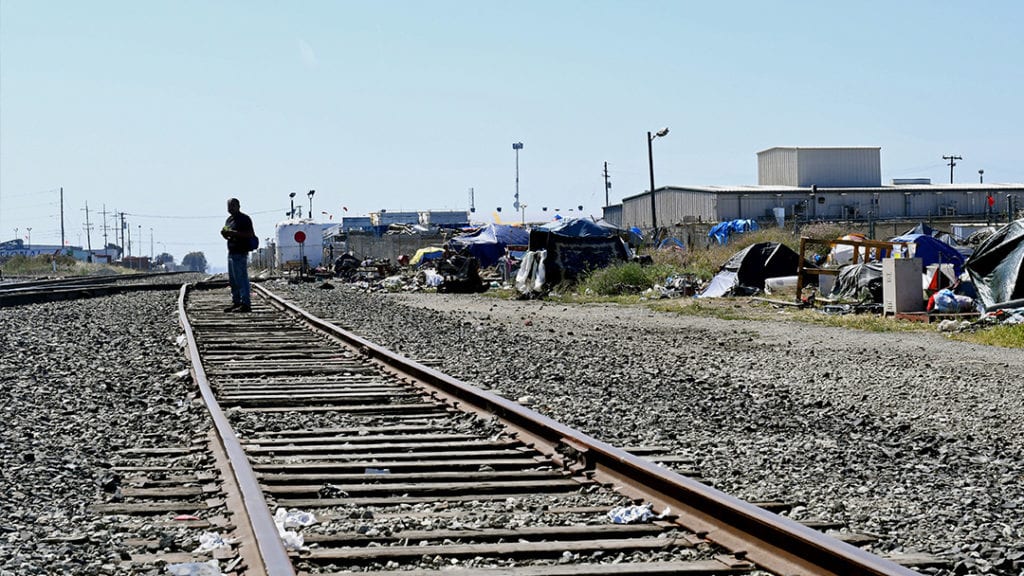 A man walks the rail road tracks along the edge of a homeless encampment where he stays. June 12, 2019. Photo by Kate Cimini.

Steve Berg, vice president of programs and policy for the National Alliance to End Homelessness, suggested that California’s prison reform efforts might be another factor in the increased percentage of black homeless people.

Thousands of people have been released from prison in California since 2008 as the state pursued aggressive policies to relieve overcrowding and handle punishment and rehabilitation outside prison walls.

According to an April report by the Pew Research Center, while the percentage of black people sentenced to prison has decreased in number in recent years, it is still disproportionately high.

“Coming out of corrections is a huge risk factor for homelessness,” said Berg. “That creates a sort of bounceback effect. People who come out of prison and become homeless are far more likely to go back to prison than people who come out of prison and don’t become homeless. The large racial disparities in the corrections system are both a cause and effect of disparities in homelessness.”

Harraway was arrested at least a dozen times, most often related to drugs, and cycled in and out of the prison system, which she said was common among the homeless residents of Chinatown. She connected with Community Homeless Solutions and entered its Women in Transition program, after which she found permanent housing.

Under the state’s prison reform efforts, the rate of successful parole applications has jumped from a few out of every 100 to almost one in six. In 2017, a congressional committee found that “95 percent of the prison population today will be released at some point in the future.” The share of parole hearings that ended in a recommended release jumped from under 3 percent in 2007 to 19.1 percent in 2014, according to California Department of Corrections and Rehabilitation data.

But felony records, stagnant wages and a rising housing crisis combined with policies that exclude or punish marginalized groups can ensnare vulnerable black people in homelessness.

Even without felony records, black people face more difficulties finding employment and housing than other races or ethnicities, the National Fair Housing Alliance (NFHA) demonstrated in a recent report.

The NFHA found that even after the Fair Housing Act of 1968 legally outlawed denying people housing based on race after redlining and exclusionary zoning targeted people of color, black people still face housing discrimination. Another analysis of the Home Mortgage Disclosure Act data evidenced that black people are charged higher fees and rates than white borrowers, and are routinely denied mortgage loan applications at a much higher rate than white applicants.

“This is a community where the barrier is at the front door,” said Berg. “The higher poverty rates among black and Native American people are quite pronounced. And race discrimination by landlords or by the corrections system, those all combine to lead to these vary disparate rates of homelessness.”

“When you get the r-word in your head, it’s bad for the whole community,” Harraway said. “It can start a riot.”

At shelters and programs in Chinatown, Harraway said she noticed rules were often more harshly applied to black people. While people with lighter skin might be allowed to cut in line for the bathroom in an emergency, for example, black people in the same situation might be told to wait their turn, Harraway said.

“It’s alienating,” said Harraway. “It hurts. Especially when you have the attitude (that) we’re all in this together.”

At one point, she said, racial tensions violently divided the community in Chinatown where she stayed. People began to retreat behind racial lines, with black people facing off against Latinos.

Harraway herself was later diagnosed with post-traumatic stress disorder (PTSD) from all the violence.

Harraway’s cousin was killed; she arrived just in time to witness his last breaths. Between Aug. 22 and Sept. 17, six people were killed in Chinatown, some shot in broad daylight. 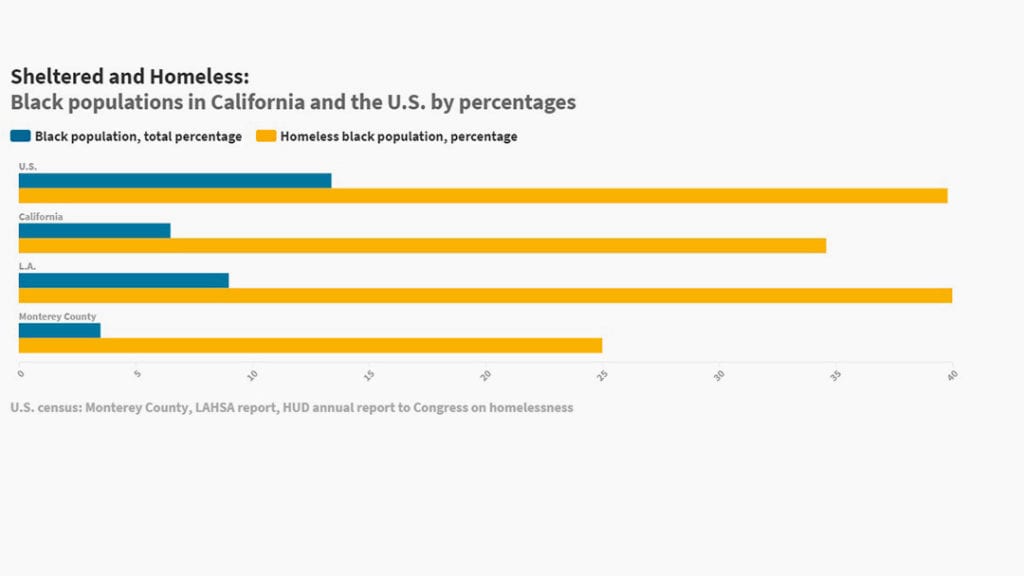 When broken down by race and ethnicity, PTSD affects black people more than any other group, and black women at a greater rate than black men, according to a 2011 study published in the Journal of Psychological Medicine. A 2006 study in the Journal of Emotional Abuse also found that perceived racism contributed to emotional and psychological trauma in people of color.

When asked by LAHSA what would have kept survey participants from becoming homeless, the most common answer was “someone who cared about me.”

Some homeless black residents in Monterey County say that is exacerbated by the lack of black people in decision-making positions in programs that serve the homeless.

Victoria Powers, a black woman in her 30s who has lived in Chinatown since she was 15, agrees. Latinos working in shelters gave special treatment to the Latinos living on the street, she said, but the same was not true for black people hired by the shelters.

“You’d think they’d want to help their people, but they’re too afraid of getting fired,” she said.

“It just shows that racism still, in some form, exists,” added Shawn Payton, a black homeless resident in Chinatown and Harraway’s cousin. “The whites, the Mexicans (working in shelters and housing) are going to look out for their own.”

Powers and others said they felt shut out of services, that they weren’t told certain programs existed until another black person clued them in.

Berg noted that this sense of exclusion is not unusual among black homeless people, however, and added that there are ways to combat it.

“It’s really a matter of working with the black community to make sure, to know that these resources exist and work with people to make sure they’re as friendly as possible,” said Berg.

Working with people experiencing the programs as well will go a long way to improving gaps in the program and helping streamline the process, continued Berg.

Robinson, at the Coalition of Homeless Services, noted that the coalition has seen a gap in the number of black people enrolled in their services versus the number of white people enrolled, evidenced in its 2018 report on racial disparities in homelessness. While black people outnumber white people 12-to-1 among the homeless population, they only enroll at a rate of 3-to-1.

However, once enrolled in the program, the percentage of positive outcomes for black and white clients are nearly uniform, with 8.59 black people graduating to permanent housing for every 10 white people.

“Once you enter the system, your chance of a positive outcome is the same as anyone else,” said Robinson. “I think that’s an important point, though, that we should do a better job of outreach or building trust. We are falling short.”

Kate Cimini is a multimedia journalist for The Californian. This article is part of the California Divide project, a collaboration among newsrooms examining income inequality and economic survival in California.

Header Photo: Yolanda Harraway, who used to be homeless in the Chinatown area of Salinas, has found permanent housing and earned her high school diploma. Photo by Chelcey Adami.