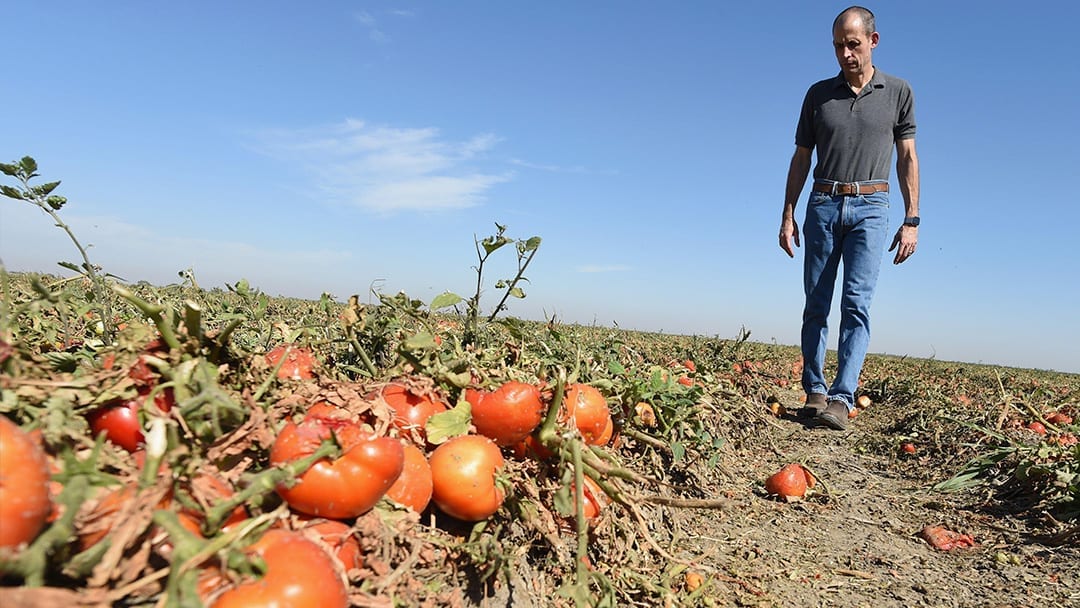 By Manuela Tobias | The Fresno Bee

Maximina Molina Sanchez is worried about going hungry this winter. She depends on a food bank in Huron to feed her husband and two kids. But with most agricultural workers out of jobs during the winter, demand is bound to increase, so she worries there won’t be enough food to feed everyone who needs it.

The Sanchez family is among the 22% of people in Fresno County who couldn’t afford the groceries they needed in the past year. Fresno ranks third in the country for food insecurity, according to the Food Research and Action Center.

At the same time, the county leads the nation in agricultural production. A new study from Santa Clara University revealed that a whopping one-third of the hand-picked crops grown in the state are left to rot in the field.

So why can’t this food get to the people who really need it? Food banks are addressing shortages on a piecemeal basis and startups are expanding sales of farmers’ surplus produce. But there is no solution in sight to bridge the food insecurity and crop overproduction that plague the Central Valley because it takes money and labor to harvest the surplus and haul it to food banks.

Todd Hirasuna, vice president of Sunnyside Packing Company in Selma, said he was not surprised by the study’s finding. The company regularly leaves a third of its produce in the field.

“When you lump the whole Valley together, it’s a pretty staggering number at the end of the day,” Hirasuna said. 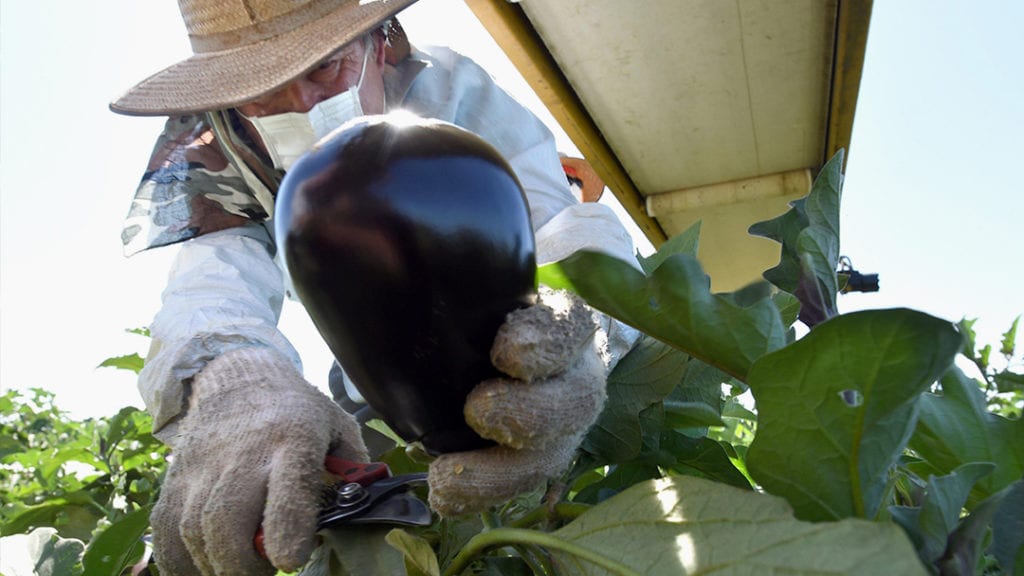 Hunger in the Valley

The U.S. Department of Agriculture estimated that 10.6 % of households across the state were food insecure in 2018. In 2016, over a fifth of Fresno residents received food stamps and 10.6% of Californians. It’s unclear whether those are the same groups of people. However, according to the Food Research and Action Center, people on food stamps may still be food insecure because the aid doesn’t always cover the cost of the food they need. And many families with insufficient food have incomes higher than the threshold for food stamps.

Second Harvest Food Bank of Silicon Valley found that 27% of residents in Santa Clara and San Mateo counties are at risk of hunger even though they live next to two of the most productive agricultural valleys in the country. The food bank raised the issue with food waste researchers at Santa Clara University, who in turn quantified the amount of surplus in those fields.

“We wondered whether there may be some opportunities to salvage the food left in the fields and direct it to people on food assistance,” said Greg Baker, executive director of the Center for Food Innovation and Entrepreneurship at SCU.

Examining 20 hand-harvested crops on 123 Central and Northern California fields in 2016 and 2017, the researchers found that 34% of edible produce never makes it off the farm. Loss rates varied widely among crops; cabbage, romaine lettuce and strawberries were among the most lost. (Researchers refer to leftover produce as “loss,” not “waste,” because unlike food that ends up in a landfill, it can feed livestock or fertilize the soil.)

Loss rates are likely constant throughout California, according to Baker, but machine-harvested produce experiences much lower levels because the equipment leaves little behind. Produce that can be canned or converted to other foodstuff such as raisins also has lower loss rates.

Baker found that farmers tend to overproduce to fulfill their contracts with buyers. They plant about a third more than they need in case of weather, pests, plant disease, labor availability, field stability and over- or under-sized crops. If after delivering, the price is too low, they leave the rest to rot.

This year, Bowles Farming Company in Los Banos harvested close to 85% of its cantaloupes because market demand was high, according to Cannon Michael, company president. However, last year his company left about 80% of its cantaloupes in the field because prices were too low to justify harvesting.

“Food waste is a big concern of ours,” Michael said. “It’s really frustrating.”

Lisa Johnson, a researcher at North Carolina State University who specializes in food loss and waste, found that in the Southeast, 40% of crops are lost. This is particularly concerning, she said, because the losses stack atop the 30% to 40% of food USDA estimates is wasted each year in stores and households. 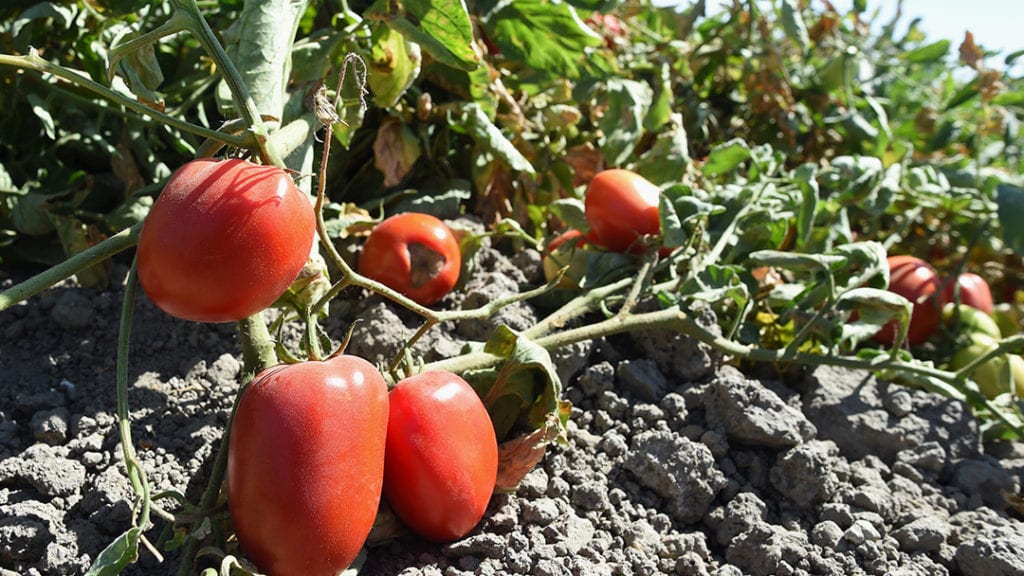 Tomatoes remain in a field in Los Banos after harvest. Photo by John Walker/The Fresno Bee

‘Why not donate it to people in need?’

Sanchez has seen the loss first-hand. She was a picker until her son, now 9 months old, was born. Life has been difficult since her husband fell off a truck while he was packing lettuce and injured his back a few months ago.

Westside Family Preservation, a food bank in the roughly 7,000-person town of Huron, keeps most of the town’s agricultural workers from starving by supplying such staples as milk, corn flakes, pasta, rice, beans and canned fruits and vegetables. But the food bank regularly lacks the fresh produce grown in the Valley, which Sanchez said she needs to keep her sons healthy.

“Instead of throwing it away, why not donate it to people in need? The cold is coming, it’s going to rain, and these people, we are in need.”

But getting food out of the fields and into the households that need it is far costlier than simply growing it, Johnson explained. With limited budgets, food banks can’t offset the full cost of labor.

The Central California Food Bank serves about 280,000 families in the Valley, including Sanchez’s family. They share surplus and trade vegetables with over 200 food banks nationwide. But supplies often fall short.

“It’s feast to famine,” said Jaclyn Pack, food acquisitions manager at the food bank. “During the summer we’re very feast. I can’t keep our cold storage empty. And during the winter it’s very famine, where I’m constantly trying to figure out how to get product in.”

The food bank provides farms with cardboard boxes and picks them up, and the state gives farmers a tax credit worth 15% of the wholesale value. But Baker said many farmers don’t participate because they either didn’t know about the tax incentives or found the compensation too low. It made more sense to write off the crop as a loss than to donate it.

“It’s not their business,” Baker said. “They’re not running a charity along with their farm. They’re very happy to contribute but it can cost them too much money because they’re operating on slim margins as it is.”

Food banks have tried to get volunteers to glean the produce off the farms but it didn’t work. Frequently there wasn’t enough time to organize enough volunteers and gleaners take far longer and harvest much less than professional field workers.

Steve Linkhart, director of Farm to Family, at the California Association of Food Banks, is working on a statewide solution. He plans to hire the labor the farms already contract to get all the product off the field that could go to food banks. Funding, again, is the main roadblock.

“We have to find a way to offset the labor fees,” Linkhart said.

Growers and researchers say reducing the surplus calls for a seismic shift. They suggested more open communication within the supply chain. Baker said the retailers could shift the status quo by being more flexible on what they accept. That is, taking more produce that is off-size or has imperfections. That way, growers wouldn’t have to overplant.

Full Harvest works with growers across California to deliver imperfect fruits and vegetables to food processors across the state and country.

“These are products that didn’t have any channel for incremental revenue,” said Christine Mosely, who runs Full Harvest. “It’s a win-win because the farms are happy to sell it because it would’ve been disced under.”

But a lot more needs to be done to curtail waste at a bigger scale, or get more of it to people in need, and no one has even a roadmap just yet.

Michael at Bowles suspects the problem will only worsen as produce prices stay low and labor costs rise.

“The potential for food to be left in the field is increasing because of the increased human cost,” he said. “That’s why a lot of the big folks are trying to move as much production out to Mexico and Central America, because the cost of labor is so much less.”

Manuela Tobias is a journalist at The Fresno Bee. This article is part of The California Divide, a collaboration among newsrooms examining income inequity and economic survival in California.

Header Photo: Cannon Michael, President of Bowles Farming Company in Los Banos, walks through a field that has been harvested but some tomatoes are left behind. He is working with food banks to try to distribute surplus produce. Photo by John Walker/The Fresno Bee