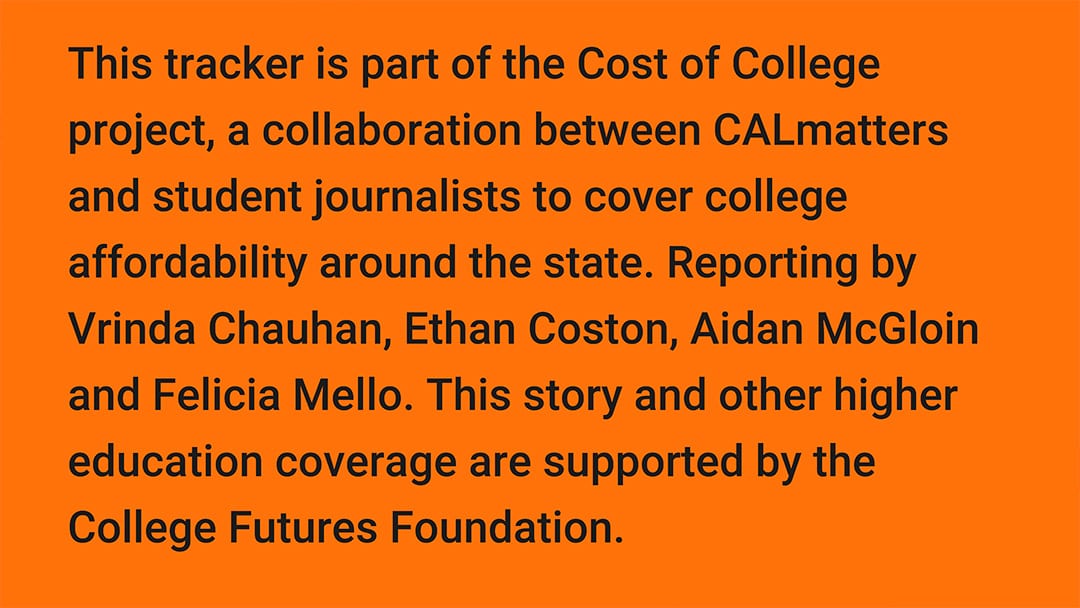 It has long been a refrain among California students struggling to pay for housing, food and textbooks: There’s more to the high cost of college than tuition. Early this year, as state lawmakers convened, hopes were high that finally, California was listening.

Moved by reports of homelessness, food insecurity and consumer ripoffs on campus — and encouraged by a budget surplus and a new governor who’d talked often about the cost of education —  legislators introduced a volley of proposals to help feed, house and protect students. At least two would have massively expanded state coverage of students’ costs of living.

“It’s been 20 years since we’ve had real change in the Cal Grant,” Assemblymember Jose Medina, the sponsor of one of the measures, said at the time, referring to the state’s financial aid program, and calling an expansion “overdue.”

But as the legislative session wound down and Gov. Gavin Newsom signed a last flurry of bills this past weekend, Medina’s proposal and most others designed to tackle the cost of college had stalled.

Of the 11 bills that CalMatters collaborated with student journalists to follow in our college affordability legislative tracker, only two were passed, signed and enacted — one to gather data on gainful employment among graduates of for-profit colleges, the other to modestly expand “free” community college.

This is not to say that nothing got done. Students with children will see their maximum Cal Grant award nearly quadruple this year to $6,000, first-time community college students can now attend tuition-free for two years if they go full-time, and campuses are receiving their largest-ever state appropriation to tackle hunger and homelessness.

All are a result of the 2019-2020 budget lawmakers agreed to in June, which also boosted the number of scholarships in the competitive Cal Grant program that serves students who take time off between graduating high school and returning to school.

UC Student Association President Varsha Sarveshwar called the student lobbying that led to the changes “pretty successful” but said she’s “hoping everyone can come together on a solution that better addresses the total cost of attendance.”

The changes will affect a small percentage of California’s more than three million students. The 15,000 new competitive Cal Grants, for example, pale in comparison to the more than 400,000 qualified applicants who were shut out of the program last year. But the governor’s senior policy advisor on higher education, Lande Ajose, described the new funding as a downpayment on a larger investment.

“Governor Newsom, frankly, made a campaign promise around the total cost of attendance being vitally important for California students to be able to afford to go to college,” Ajose said. “Having said that, the governor is also incredibly disciplined about the budget, about not wanting to overpromise and underdeliver.”

Several higher education advocates said they saw 2019 as a banner year in which passionate testimonies of students whose financial stresses were affecting their education penetrated the sometimes insular bubble of capitol policy discussions.

“Financial aid policy debates are big debates and the details can be thorny,” said Debbie Cochrane, executive vice president at The Institute for College Access and Success. “The fact that they didn’t all get sorted out is not my takeaway. My takeaway is the fact that multiple proposals got introduced, because that shows the level of commitment.”

Both Medina and the author of another proposal to increase financial aid for community college students, Senator Connie Leyva, have vowed to continue moving their bills forward, and potentially reworking them, next session.

The cost estimates are daunting — about $2 billion for Medina’s bill, a 100% increase in the state’s Cal Grant budget — but doubling state investment in financial aid is not unprecedented, said Jacob Jackson, a research fellow at the Public Policy Institute of California.

“Cal Grants are tied to tuition, and when tuition increased during the great recession, our Cal Grant costs actually doubled over 10 years,” he said.

Some legislators put their ideas to tackle college costs on pause after the budget was signed. Senator Richard Roth had argued that offering Cal Grants for summer sessions would help low-income students graduate faster. The state gave the University of California and California State University a total of $10 million to experiment with waiving summer tuition for some students this year, and Roth parked his bill.

But Sarveshwar said UCSA would continue lobbying for all students to be entitled to the summer grants.

Cost wasn’t the only challenge. When Assemblyman Marc Berman proposed requiring community colleges to keep parking lots open overnight so homeless students could sleep there, the idea drew national attention, in part as a symbol of California’s bonkers housing crisis. But it was quashed after a Senate committee added amendments that Berman said weakened the bill, and he withdrew it.

Berman said he blamed himself for underestimating the cost of securing the lots. But community colleges also seemed to resent the prospect of the state telling them how to solve their students’ housing problems.

“What about giving our homeless students referrals to county and social service providers…emergency grants, and student success programs ensuring students enter the workforce and make a living wage?” Fresno City College President Carole Goldsmith wrote in an opinion piece for The Fresno Bee.

The clash also shows the need for a paradigm shift in how California colleges view their responsibilities to students, Berman said.

“Forever, colleges and universities have just seen their role as educating students, and in an ideal world, that would be all they’d have to do,” he said. “But if we look at as, ‘This is what needs to happen to generate the graduates that our economy needs in the future,’ then this isn’t like a welfare program, this is really an investment in California’s economy.”

That view seems to be gaining ground among the Legislature’s Democratic majority, but lawmakers still face tough questions. Among them: whether to prioritize extending state financial aid to categories of students who are currently shut out, or increasing grants for those who already get them.

One bill that passed this year focused on an especially vulnerable group of students: those who attend for-profit colleges. Authored by Assemblyman David Chiu, it will monitor whether graduates of the schools — who statistically have been more likely to default on their loans than those at public and non-profit universities — are earning enough to pay back their debts. Originally meant to penalize schools who failed that test, it was scaled back after intense lobbying from the for-profit college industry.

With the ink barely dry on this year’s legislation, conversations about next year’s higher ed budgeting are already beginning.

UC Merced Interim Chancellor Nathan Brostrom said he’d like to see the state provide more financial support next year to students who are transitioning out of the foster care system. “They’re basically graduating from the program at 18 and don’t have anywhere to go,” he said.

UC also is considering a new cohort-based tuition system that would freeze fees for current students for up to six years, combined with increases as new classes enter. It could help families plan their budgets but is controversial because it assumes tuition will go up.

Meanwhile, survey results from the state’s student aid commission show that California students are spending about $2,000 per month on non-tuition costs, with more than 30% saying they didn’t have enough money to pay for housing.

This week, TICAS released a report on reforming state financial aid that urged California to extend Cal Grant entitlements to all students regardless of age or time out of high school. It also called for capping student work hours at 15 per week when calculating how much they can be expected to contribute to the cost of their education.

This story and other higher education coverage are supported by the College Futures Foundation.