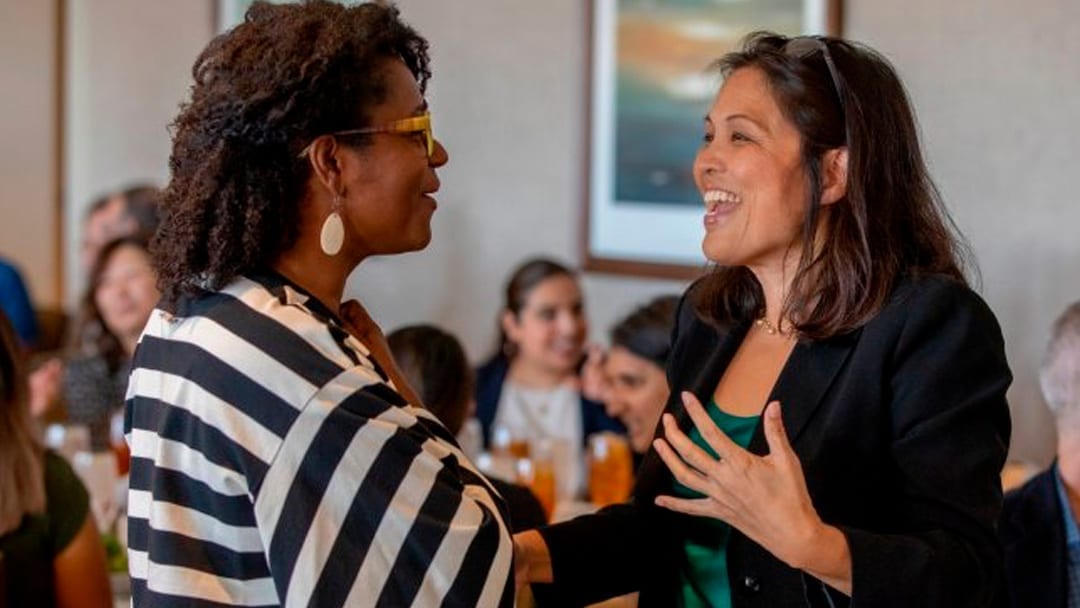 Julie Su wants the world’s fifth largest economy to remain a global juggernaut. To do so, California’s labor secretary acknowledges, the state will need to position its workforce for the jobs of the future — a catchall term that encompasses not only the promise of innovation but also the dystopian threat of even worse income disparity.

Economists project massive upheaval from disparate forces such as automation and an aging population. California’s challenge, as Su sees it, is to roll with those disruptions while making sure jobs here continue to pay a living wage, offer worker protections and accommodate working families.

In short, she wants the future of work to bridge today’s wealth gap. A labor and civil rights attorney — and past recipient of a MacArthur Foundation “genius” grant — Su has been leading the Future of Work Commission alongside Chief Economic Advisor Lenny Mendonca and Senior Advisor on Higher Education Lande Ajose. They have been hosting meetings across the state with the goal of coming up with a new social compact for workers.

Meanwhile, Su — whose full job title is secretary of the California Labor and Workforce Development Agency — has committed to a new future of work department to execute the commission’s findings and recommendations. In an interview, edited here for length, she spoke to CalMatters about the commission’s goals and how she plans to enforce California’s own recent workplace disruption, the new worker classification law known as AB 5.

Q: What are we looking at in terms of future of work? And why should Californians care about this topic?

A: We hear so much about how A.I. (artificial intelligence) is going to destroy jobs, such as how a robot will take the place of humans. But the commission was formed under the principle that there’s nothing inevitable about the shape of our future economy. We can, through policies and interventions, … come together to reverse the 40-year trend of growing income inequality and poverty.

Q: What’s your understanding of the distribution of wages right now, whether it’s gender, race or geography?

A: Over one third of working people in California make less than $15 an hour. And a full 20% of those earning less than $15 have a college degree or some college education, which forces us to think about the connection between education and job opportunity, right?

It’s not enough to address the cost of things, we also have to address how much people actually make. So we have to focus on the quality of jobs.

Over the last 40 years, productivity has increased by 259% but wages only by 11.6%, which means that we have a massive distribution problem. The productivity gains are going somewhere but they’re not going to working people. And that’s creating not just income disparity, but also wealth disparity.

Q: So what are examples of solutions?

A: I don’t want to pre-suppose what the commission’s going to come up with. I think that there are some policies/strategies/ideas that have been tried and we just need to expand them. We’re looking here and elsewhere in the world. What lessons do they have for California? And then, I think that there are ideas and solutions that sitting here today we have not yet imagined.

Q: Can you at least tease me with an idea?

A: So for example, at the first meeting, the commission had a panel of four workers and one had a union job where she worked as a janitor. So the union job actually helps to preserve her security but that job was also subcontracted out, and when it was, she’s lost certain things like a retirement benefit.

So clearly one part of the answer is what is the role of union? And how do we ensure that unions are strong and can organize and, given changes in the economy, are supported in new ways of organizing? There’s data that shows that having a union does more to insure higher wages than even having a college degree.

Then the other two workers who spoke were in workplaces, both of whom have received money from the Quality Jobs Fund, a collaboration between the Federal Home Loan San Francisco and the New World Foundation. And the fund was used for capital investments in companies that meet certain job quality criteria. These two workers both talked about how their jobs allow for a living wage, have flexibility – one of them had a special needs child and needed to go to appointments – that include benefits, access to training and professional development, and then upward mobility and a chance to build wealth.

Q: All those suggest higher labor costs for employers, though. Is there a point where government then starts to subsidize private industry in order to provide a private-sector worker with better wages? Is that a direction we should contemplate?

A: I think everything is on the table. What the governor has charged the commission with is to think really boldly, not assume that anything that’s already in place has to be here or that anything we haven’t yet seen is impossible to create.

In parallel to the commission, we’re also creating a future of work department under the labor agency. We’re going to create a department that will be poised when the commissions has its recommendations to actually execute on many of them. That’s how concrete we want to be.

Part of the initial phase of the department is really just to realign existing service inside of government. One of the things that I think is very frustrating to people who try to interact with the government and try to access services, is when we say to you, “not this agency, the next agency.” What I want to do is eliminate the next window problem, “You’re in the wrong line, go to this next line.”

You want to create one line in which people can get what they need when they seek help from the government. It’s not just about creating new legislation and new powers, it’s about taking powers you already have and creating one streamlined, efficient and accessible department.

Q: The governor signed AB 5, the worker misclassification bills, and it will now take effect in January. I’m wondering what will you and your agency’s role be in enforcing that?

A: I often say that the instability that working people face — partly because of misclassification — has resulted in the day labor-ization of our economy. Instead of the steady, consistent, reliable work, people end up basically in odd jobs and you’re hustling all the time, right? So AB 5 is meant to address that kind of misclassification so that we can bring more people who should be under the protection of our labor laws back on that floor.

We’re going to be enforcing both through our wage claim process where individuals who feel like they have been misclassified can come and file wage claims. An example of that is we’ve had almost 1,000 cases in the port trucking industry filed before the labor commissioner that we’ve adjudicated and found millions of dollars owing to truck drivers who have been misclassified.

The other is just doing investigations and audits. That will be on both wages and tax because AB 5 expands the ABC test that way. So we will be doing investigations and audits so that those who want to comply with the need to reclassify can do so and those who don’t will understand that’s not the kind of economy we want in California. So we can issue citations and demand both wages and taxes and other kinds of penalties.

Q: Do you expect to investigate Uber and Lyft?

A: We do not talk about who we will investigate or the fact we are investigating. I do want to say that misclassification did not arise when the gig economy came into being. And it will not be ended by that. We also are hopeful that there are businesses who will join us in this administration who are committed to combating misclassification and also find new ways for workers to organize.

There are some workers who have been excluded from federal protections and California has a really unique opportunity to bring them into the fold and think about ensuring that they have true union protection working side by side with labor and businesses who are interested in doing that.

Q: Did you have conversations with Uber, Lyft, DoorDash, Postmates or any other entities?

A: We did. I think we always want to work with — whether it’s business or labor — on trying to solve some of these complex and intractable problems. As the governor said when he signed AB 5, we want to continue to be open to those conversations and whatever possibilities they might bring about for trying to improve working conditions and the lives of the drivers in California.

Q: Why wasn’t a third way accomplished in the last legislative cycle? Why couldn’t a compromise be done?

A: That’s a good question. We wanted to make sure we were working with folks who wanted to talk about this but I don’t think there was a deadline in our minds for that. These ongoing issues, they’re very complex. And when we talk about creating a voice for workers, that it’s really a voice premised on union — like a genuine right to a union on the job. If we can accomplish something, it will set a model for the country.

Q: What’s realistic for the state or local government to stem this growth in wealth inequality? You’re setting up high expectations here. We have a capitalistic society so what’s doable here?

A: We would rather set really high standards for ourselves. And if we cannot reach them all, we at least challenge ourselves to give it everything we’ve got. We are looking at this from all angles. There may be some simple things that we can do. Some of them are building off the great innovation and talents of people in California already. Are there models we can replicate and support and share so that people who want to do this right don’t have to invent it from scratch? At the first meeting, we talked about tax law, about social structures.

We don’t have an end date for the commission’s work. We have monthly meetings from now until April. We will also be issuing a report in May that’s a part of the governor’s executive order. We’d like to make sure we engage with a broader segment of Californians around what whatever the recommendations are and that could be academic institutions, philanthropy, worker centers, the tech industry and business.