This Trump rule change will mean lower wages for farmworkers 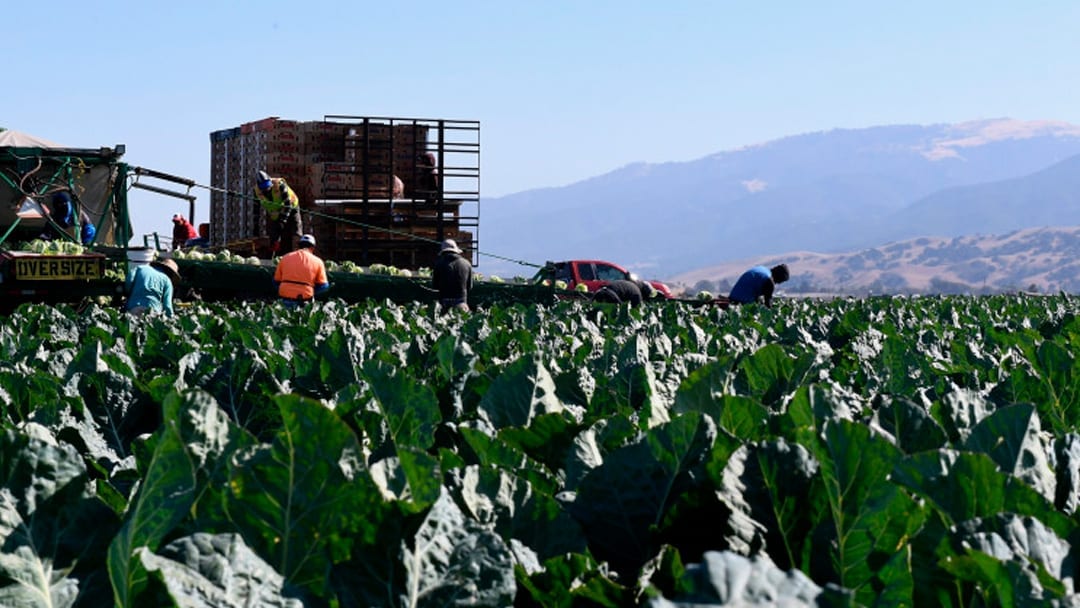 By Kate Cimini | The Californian

Temporary seasonal farmworkers will see wages decrease if a visa rule change proposed by the Trump administration goes through, and labor advocates worry that it also could lead to pay cuts for other domestic farmworkers.

Agriculture industry experts say the decreased costs will provide some much-needed relief for growers. The H-2A program allows agricultural employers to temporarily employ guest workers from other countries if there is a shortage of workers willing to take the jobs they offer.

Some H-2A workers said they would still participate in the program even if they saw their wages go down, as they would make far more in six months as H-2A workers than they would doing the same work at home in Mexico.

Orlando, who declined to give his last name for fear of losing his job, came to the Salinas Valley on an H-2A visa to pick strawberries. Picking strawberries is particularly difficult as it requires the picker to spend the day bent at the waist, gently twisting ripe strawberries off each bush.

Speaking in Spanish, Orlando said he sent the majority of his money home to his family in Michoacán, so his children could afford clothes and books for school. He supported his entire family, he said, and even if the wages in the U.S. dropped, he would still re-apply for a job as an H-2A worker. The money was too good to pass up.

His roommate, César, who would only his first name for the same reason, agreed with Orlando. “It’s the reason why we come,” he added in Spanish.

Announced in July, the Trump administration’s proposed changes to the H-2A visa came shortly after the Adverse Effect Wage Rate (AEWR) increased across the U.S. The changes would alter how the AEWR, which is the minimum hourly wage needed to attract noncitizen, seasonal workers, is calculated, lowering the hourly wage to benefit growers.

The Department of Labor calculates the AEWR annually, and each state has a different one that employers must meet. Growers who employ H-2A workers have the option to pay workers whichever is higher: the AEWR, the agreed-upon amount set in a collective bargaining agreement, or the state or federal minimum wage. In some states, that list also includes the prevailing wage, based upon surveys of employees in similar positions within the same field.

Farmer advocates say growers and employers cannot sustain the pace of pay growth, which rarely drops. Between 2009 and 2014, the AEWR increased from $10.16 to just over $11, data from the Department of Labor shows. Today, it stands at just under $14 in California. Other states, including Washington, pay just over $15 an hour.

“This will continue to erode domestic farmers’ profitability while continuing to press upward domestic workers’ wages unsustainably,” said President and CEO of the National Council of Agricultural Employers, Michael Marsh. “You’ll see farmers expanding fruit and vegetable production in Canada and Mexico, where the wage rates are significantly lower than they have to pay in the U.S. About half the fresh fruit in the U.S. is produced in a foreign country, and about a third of the vegetables.”

And others say the wage rate is not just unsustainable, but unfairly calculated in the first place, and badly in need of a fix.

“We believe the AEWR is skewed, because that is based on regions of the United States,” said Sara Neagu-Reed, Associate Director of Federal Policy for the California Farm Bureau. “So you’re comparing a combine driver in Idaho to a blueberry picker in Salinas Valley. That’s why we think it’s flawed, and it’s better to go with the proposed rule, so you’re looking at calculations by job categories, and individuals who are all in the table grape or berry-picking category.”

“You have temporary workers who are being paid more and domestic workers who technically could be paid less, but they have to be paid the same anyway, and so it has this wage inflation proponent in it,” Groot said. “What we’re trying to do is get that to tied not only to the inflation index, but also to the economy. If the economy goes down, then the adverse wage rate also goes down. Currently, it doesn’t get adjusted down, so you have an economy that’s slumping and you’re still paying those high wages.”

However, the proposed H-2A guidelines also fail to take into account year-round agriculture, as takes place in the Salinas Valley, Groot added.

He said that problem could be solved by simply increasing the number of green cards with an agriculture or horticultural preference, or adding an at-will provision so H-2A workers are tied to an area, and not one specific grower. That would help growers and farmworkers, Groot said, as growers don’t always have fields that need picking and H-2A workers only get paid for the days they work.

If wages lower, it could put added pressure on an already struggling population.

Salinas tops the list of places in the U.S. with the highest concentration of farmworkers. According to the Department of Labor, 31,700 people worked as farmworkers in Salinas in 2018. In the Salinas and Pajaro valleys combined, just over 4,000 farmworkers were H-2A workers in 2017.

The mean wage drawn by a farmworker in Salinas in 2018 was $28,940, statistics from the Department of Labor showed.

Salinas is also one of the most expensive places in the U.S. to live, with rent prices sitting at about double the national average.

The vast majority of farmworkers are Latino, and a new report from Oakland’s Insight Center for Community Development found 52% of Latino households have trouble paying for basic expenses, such as housing, food or electricity. The number of Latino households struggling increased from 49% in 2014, the report showed.

“What the proposed regulation seeks to do is change the formula for how it’s calculated,” said Marichel Mejia, national field coordinator for the United Farm Workers Foundation. “One of the ways that they are adjusting this formula is basing wages based on a survey on farm labor contractors and the wages they pay. Farm labor contractors notoriously pay way less versus farmworkers who are direct hires from the company.”

Advocates such as the United Farm Workers Foundation worry that when noncitizen workers are paid less under the Trump administration proposal, all farmworkers will likely see their earnings decrease.

Growers may hire farm labor contractors, as opposed to hiring workers, directly in order to reduce their paperwork, cut down on worker recruitment efforts, reduce legal liability, avoid unionization or labor management disputes and cut their own costs, a 2010 report out of the California Institute for Rural Studies shows.

However, the same report shows abuses have been reported against farm labor contractors since the earliest days of the system in 1928. Those abuses continue to this day as wage and labor violations as well as retaliatory actions, like firing workers for complaining about being sprayed with pesticides.

The administration’s proposal also would require employers to pay less for transportation of the H-2A farmworkers from their native country to their place of work as well as decrease annual housing inspections of H-2A housing, carried out by federal inspectors, to once every two years. Employers would also have the option to self-certify that housing meets H-2A standards instead of undergoing a government inspection.

This in particular rang alarm bells at the UFW, Mejia said.

“Farmworkers are hardworking people who do some of the most difficult jobs in this country and they bring food to all of our tables,” said Mejia. “It’s hard, difficult work that’s dignified, so they should not have their wages going down. There are farmworkers that have been working in this country for decades and their job security should not be threatened by being potentially displaced by H-2A guest workers.

“The H-2A worker program is notorious to have a lot of abuse of these guest workers coming in because they don’t have a lot of labor rights. The idea of removing some of their housing safeguards, we are against that.”

A decision on the proposal is expected within the next year.

Kate Cimini is a multimedia journalist for The Californian. This article is part of the California Divide project, a collaboration among newsrooms examining income inequality and economic survival in California.