California pursues a holy grail: high-tech data to predict how wildfire will spread 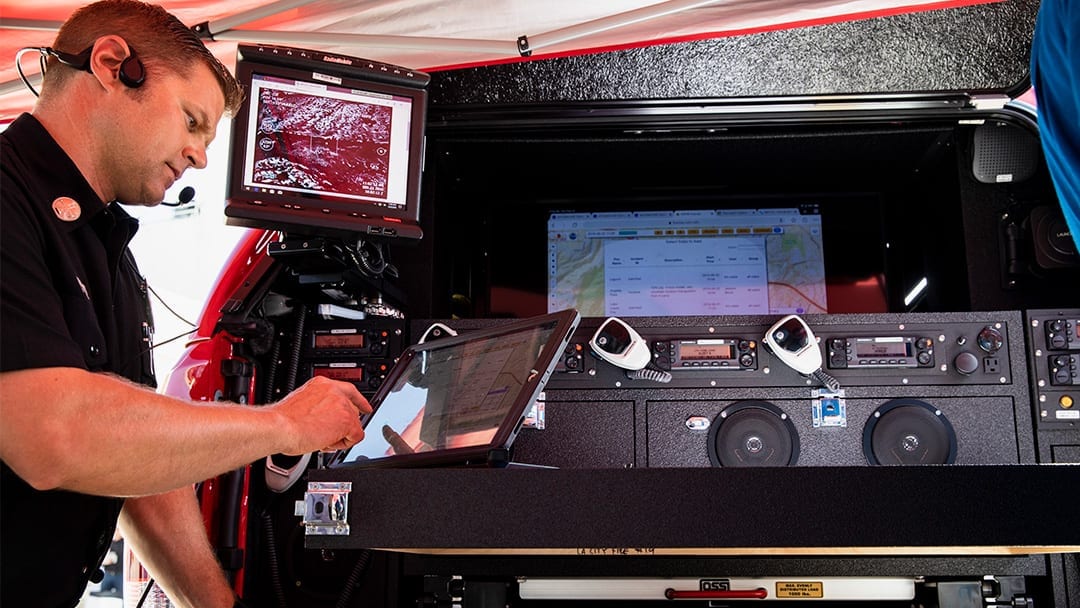 On a recent day at an expansive National Guard airfield in Los Alamitos, local fire officials put on display what $4.5 million can buy: planes crammed with high-definition cameras, radar and infrared equipment that peers through smoke. This eye in the sky can provide commanders on the ground with a broad picture of a wildfire in its infancy, the most critical time for decision-making.

The plane — operating at 10,000 feet, out of signal range — beams the information to a smaller aircraft below, which relays it to a UC San Diego research team running a lab known as WIFIRE. The lab’s supercomputer spits out mapping and heat-detection data within minutes, and it generates a model of how the fire might spread based on a number of factors — the holy grail for fire bosses. Eventually, such information will go to a wildfire warning center created under a new state law.

The planes are part of a pilot program, an aspect of California’s emphasis on technology to respond to wildfire. In the state’s new landscape of more frequent and more ferocious fires, it takes a village to combat the menace: private technology, state and local fire agencies and computing know-how at California’s universities.

The push to better anticipate wildfire danger is intended, in part, to provide early warning to residents about conditions so they can evacuate safely, before any flames get near. But the information bounty, welcome to many state officials and agencies, has potential downsides: It could regularly scare the heck out of Californians with a never-ending barrage of red-flag warnings, ever more disruptive power shutdowns — like the one more than 700,000 Northern Californians recently endured — and ever more warnings to flee. 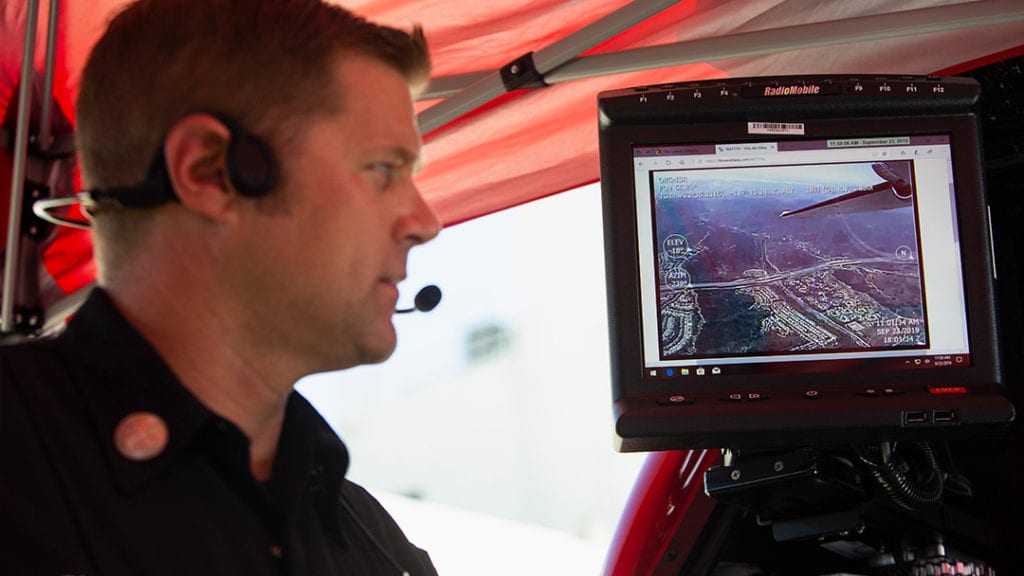 Computer in Capt. Michael Flynn’s command vehicle shows view from airplane sending fire data from the sky. Photo by Nancy Pastor for CalMatters (FOR USE WITH THIS STORY ONLY)

More frequent alerts could eventually cause residents to disregard them, acknowledged state Sen. Bill Dodd, who proposed the warning center.

“Yes, we do risk that the pendulum swings the other way,” said the Napa Democrat. “But it’s probably better to err on the side of giving folks too much information. We have to do this surgically so that only the people in the high-threat areas get these notices.”

Eventually the warning center will be operated by the state firefighting arm, known as Cal Fire, and by the Public Utilities Commission and California’s Department of Emergency Services, Dodd said. The information collected — from multiple sources under various auspices — will be shared with federal, state and local authorities, utility companies and the public.

Gov. Gavin Newsom budgeted about $1 billion in new funding for fire preparedness and response and said he intends to tap into the hive mind of California’s innovative businesses to create better tools for predicting and attacking fire. In January, on his first full day in office, Newsom signed an executive order establishing the Wildfire Innovation Sprint, a program to foster that innovation.

The state has already signed the program’s first two contracts. One project will use advanced computing to predict a fire’s path; the other will fund a network of “sky sensors” to detect fires as soon as they ignite and send alerts to emergency officials.

In March, the Public Utilities Commission hosted an international conference exploring how to harness science, private-sector products and yet-to-be-developed devices to respond to wildfires. The discussion included:

“We need to shift strategies to deal with the constant threat of wildfires,” said Assemblywoman  Cottie Petrie-Norris, a Laguna Beach Democrat. She secured the state funds for the pilot aviation project, which is being used in five Southern California counties. “We need better tools.”

Part of the state’s plan is to knit together what exists already: copious weather data, cameras operated by utility companies and federal partners. The new approach emphasizes information sharing, a potentially difficult concept for utilities and other businesses typically more comfortable keeping their data to themselves.

In addition to its involvement in the plane pilot program, UC San Diego operates the ALERT Wildfire system with the University of Nevada and the University of Oregon, a network of almost 300 high-definition cameras trained on high-fire-threat areas. The remotely operated cameras can see up to 70 miles in daylight and 100 miles with infrared at night.

Each camera pans and tilts every two minutes, said Neal Driscoll, who runs the program. The resulting information feeds into a computer that “learns” what constitutes normal conditions in a specific place. When the cameras detect an anomaly such as a smoke plume, an alarm goes off, alerting a myriad of local and state agencies that monitor the system.

In the case of a fire, authorities can manipulate the camera network to identify the fire site with fine resolution and quickly create a map. 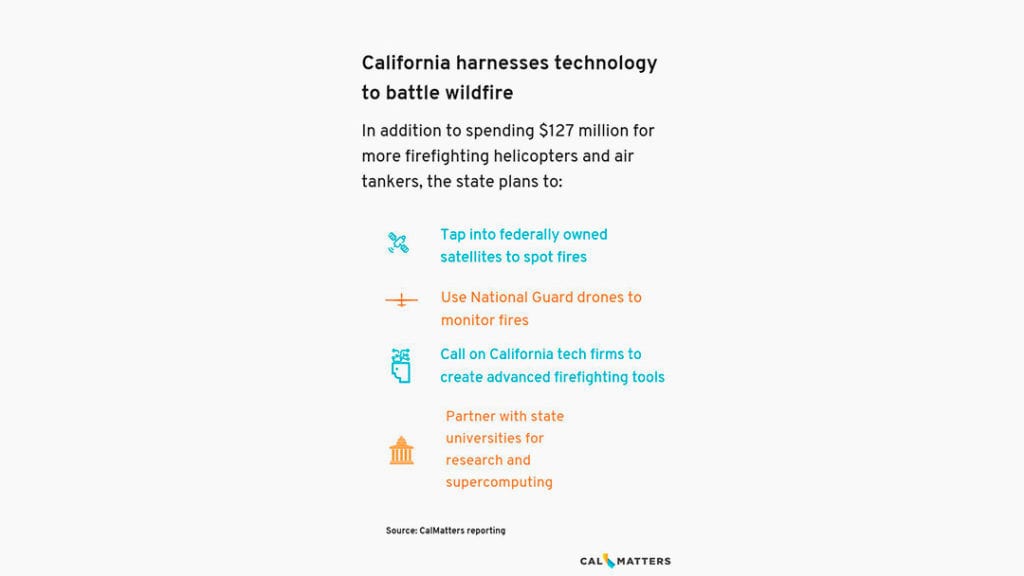 Computer programmers are using artificial intelligence to teach the network to distinguish between clouds and smoke, Driscoll said, and over time the cameras will act as remote 911 sensors. Such sensors send alarms to computers in dozens of emergency centers and other offices around the state where Cal Fire or another agency can take control of the cameras and determine whether to dispatch a crew or whether it’s a false alarm.

“Having real-time data and being able to move these cameras from command centers has changed the way we fight fire,” Driscoll said. “They allow us to make a quick confirmation of a fire and make critical decisions in the critical moment — at the incipient point.”

Officials hope to expand the system eventually to 1,000 cameras around the state.

Much of the interaction with new technology falls to Cal Fire and local fire agencies, where handed-down traditions are strong. The fire service has in the past been slow to adapt to change — longtime wildland firefighters laugh about how old timers resisted the adoption of chainsaws, arguing that axes didn’t need gasoline to operate.

Still, some fire veterans keep one boot in the future and one in the past, cautioning that technology is only helpful until it fails. There’s no substitute for experience — what Dave Winnacker, chief of the Bay Area Moraga-Orinda fire district, calls “the hair-on-the-back-of-the-neck factor.”

“This is a human business; we need people doing things, not staring at a tablet,” Winnacker said. “The computer just remorselessly runs the scenario and does the math. When the model runs, I want my battalion chief up on the hill to look at the model, and then look at the fire, and say, ‘Hmm, I don’t think that’s right.’ The machine does not have the authority to make decisions.”

Winnacker was a crew leader fighting a 2017 blaze in Napa Valley, where cell service went down for seven days. “The need for an analog option is always there. We are always going to need people who can operate without the information scaffolding support.

Header Photo: Los Angeles fire official Michael Flynn demonstrates advanced information equipment in a command vehicle, part of a California pilot program. Photo by Nancy Pastor for CalMatters (FOR USE WITH THIS STORY ONLY)