Is your city ready for California’s next recession? 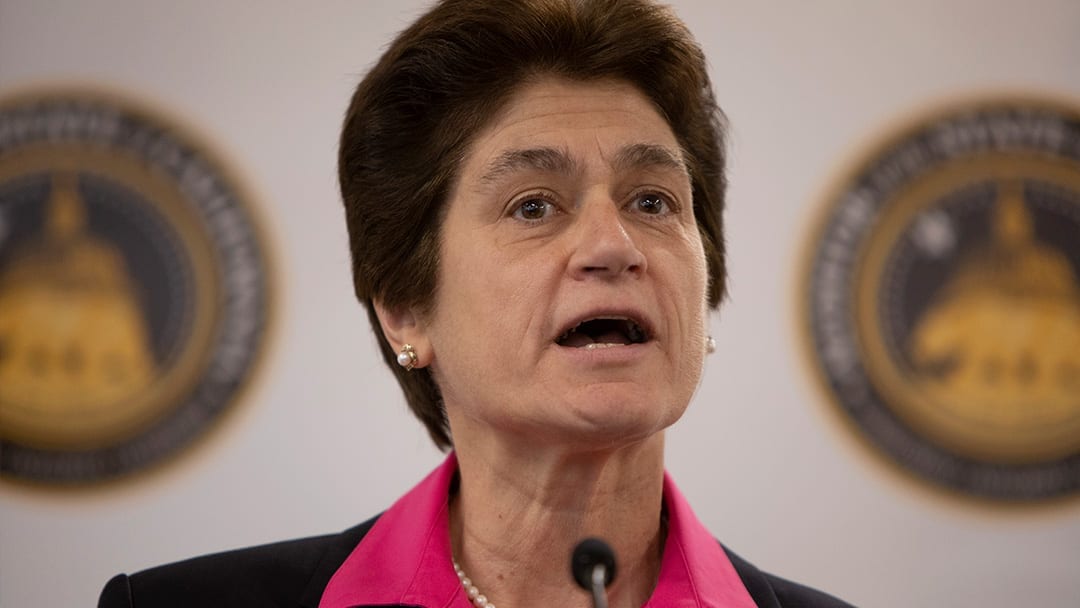 California might be enjoying a historic economic expansion, but pockets of the state could be devastated in the next recession and at least 18 cities are even now at high risk of fiscal distress, according to a first-in-the-nation dashboard released Thursday by State Auditor Elaine Howle.

Compton, Atwater, Blythe, Lindsay and Calexico were the top 5 cities called out by the state’s fiscal watchdog based on their cash flow, debt burden and pension liabilities in a new online display for the High Risk Local Government Audit Program.

“Right now, we’re in strong economic times but everyone is expecting that recession to hit,” Howle said. “So hopefully this information will trigger discussions and decision-making that better prepares cities to be able to respond without cutting services.”

The state auditor’s office began examining local governments for signs of fiscal shakiness in the wake of a financial scandal in the city of Bell. Then-Assemblyman Ricardo Lara, whose district includes the tiny Los Angeles County city, authored Assembly Bill 187 in 2011 authorizing the auditor to determine whether local agencies are at risk of fraud, waste or mismanagement.

The top 18 high-risk cities comprise a mix of size and geographic areas, but regional pockets were apparent in the East Bay and inland Los Angeles County.

Compton was determined to be at highest risk due to the lack of transparency over its finances. The working class city near Los Angeles, known in years past for its high crime rates and gang problems, also has a history of being cited for alleged waste, fraud and misuse of taxpayer dollars and made news in the past for being on the brink of bankruptcy. Nearby, the cities of Vernon and Maywood have also been cited for weak governance.

The desert town of Blythe in Riverside County has likewise been known in recent years for its travails, which include a high poverty rate and shrinking population. It has bet big on cannabis to infuse the city’s coffers but The Desert Sun found only one company has opened its doors.

There were, however, some surprises. The East Bay city of El Cerrito made the list at No. 7 for poor liquidity and low reserves in addition to a high ratio of pension obligations and costs. And suburban communities to the east of Los Angeles – San Gabriel, Monrovia and West Covina – were singled out for being saddled by high pension and retirement burdens.

Compton City Manager Craig Cornwell said in a statement that the city has been working for the past year with the state controller’s office, and “diligently preparing to release the audited financials so the public will have a better understanding of our fiscal health.”

“We remain dedicated to continuing to make improvements,” Cornwell said.

Atwater City Manager Lori Waterman said the Central Valley community has been cooperating with the state auditor’s team, and has implemented recommendations that helped take a $4.1 million deficit down to zero over the past five years. 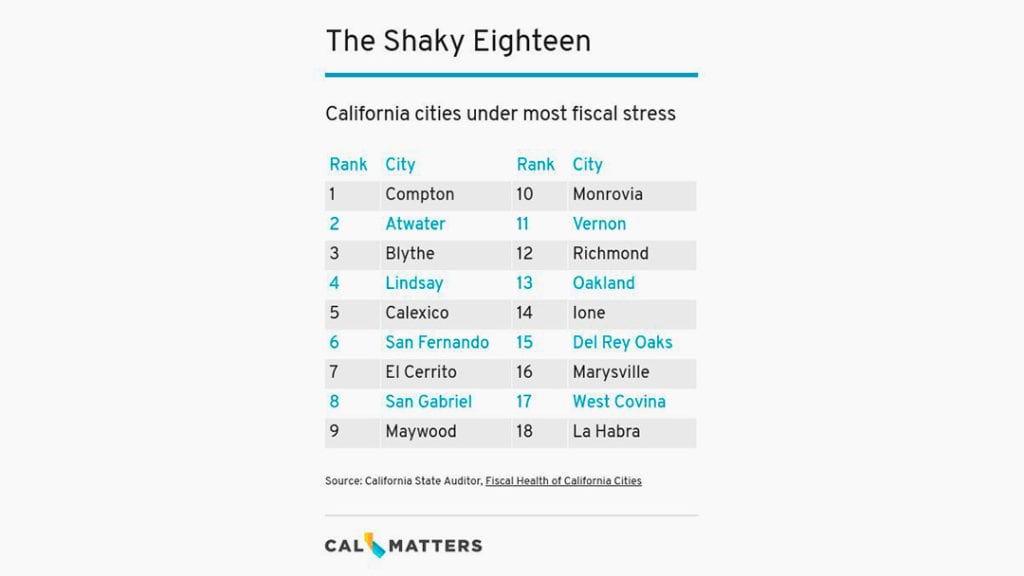 “We didn’t get here overnight,” she said, “and so they understand we’re not going to get out of it overnight.”

Jill Oviatt, director of communications and marketing for the League of California Cities, took issue with Howle’s findings, calling the dashboard “a data dump that’s void of context and analysis” and noting that most of the numbers are from the 2016-17 fiscal year, which is the most recent year for which information is complete.

“It doesn’t tell the story of now, and so we’re not really clear on how helpful this dashboard is to the public, to the cities or basically anybody,” Oviatt said.

But Oakland City Administrator Sabrina Landreth, while echoing that critique, acknowledged that the dashboard “does highlight the challenges many California cities, including Oakland, are facing related to pension obligations and retiree medical benefits.”

Howle said her office can investigate local agencies if it receives authorization from the Joint Legislative Audit Committee. In Bell, eight officials, including the city manager and council members, were convicted on corruption charges for looting the city treasury and boosting their pay and benefits.

Howle said she hopes the dashboard will prevent the next City of Bell scandal by fostering transparency — and better prepare cities for the next economic downturn even as pension costs continue to climb.

“If some of these costs continue to go up and these cities aren’t prepared for them, will they have to cut services in order to pay pensions, to pay for benefits, to pay for the debts that some of the cities have taken on,” she said.

A separate report from the National League of Cities has found that local governments are bracing for an incoming recession. The League reported that for the first time in seven years, cities across the U.S. shared a general expectation of declining revenues in the next fiscal year.

With assistance from a panel of local government financial experts, Howle’s office filtered nearly all 482 California cities through 10 financial criteria, six of them dealing with pension and retirement debt. Eleven cities were left out because they were either too small or had incompatible financial reporting requirements.

The auditor’s office ranked cities from highest to lowest vulnerability, and used green-yellow-red traffic light colors to indicate a city’s level of risk. While 18 cities are at high risk overall, 236 cities were labeled moderate risk and 217 cities deemed low risk for the 2016-17 fiscal year.

Rankings were determined according to a weighted formula based on a city’s liquidity, or available cash; general fund reserves; debt; revenue forecasts; and funding for long-term commitments.

Besides reviewing the amount of money a city is collecting and spending each year, Howle’s team looked heavily at the pension and retirement obligations that make up a big part of local government debt in California. For example, the dashboard displays a city’s pension obligations by comparing its unfunded pension liability and so-called pension obligation bonds, a form of borrowing to cover existing pension costs, to the city’s revenue.

And in trying to forecast how well cities can manage future pension costs, her team pulled 5-year financial projections from the California Public Employees’ Retirement System. The auditor found a high number — nearly half of all cities — are at high risk of not having enough funds to cover their CalPERS payments unless they cut services or impose new taxes.

Howle said she plans to update the list annually.

Header Photo: California State Auditor Elaine Howle says pockets of the state are seriously vulnerable to the next recession, Oct. 24, 2019. Photo by Anne Wernikoff for CalMatters