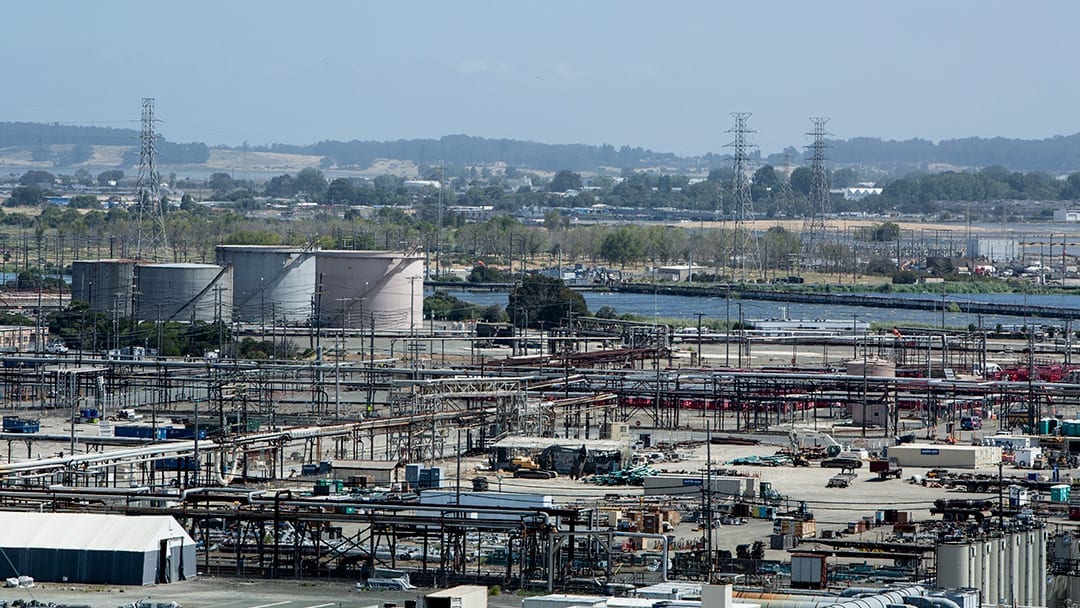 The federal government’s latest assault on California’s climate policies could make it more expensive for greenhouse gas polluters like oil refineries and heavy industry to cut their emissions.

That’s the warning from a carbon-trading advocacy group called the International Emissions Trading Association, or IETA, which counts major oil companies and manufacturers among its members.

In a statement issued Thursday in response to questions from CalMatters, the group condemned the U.S. Department of Justice’s new lawsuit that takes aim at California’s signature program tackling climate change: cap and trade.

The Justice Department’s complaint, filed Wednesday, contends that California strayed into the federal realm of foreign policy when it linked its cap-and-trade program with Québec’s.

“The state of California has veered outside of its proper constitutional lane to enter into an international emissions agreement,” Jeffrey Bossert Clark, an assistant attorney general with the Department of Justice, said in a news release. “The power to enter into such agreements is reserved to the federal government, which must be able to speak with one voice in the area of U.S. foreign policy.”

The lawsuit, part of a broad federal assault against California’s climate change policies, comes after the Trump administration stripped California of its authority to police tailpipe pollution on its own terms, launched an antitrust investigation into car companies that cut a deal with California and threatened the state with federal highway sanctions.

In a statement, California Gov. Gavin Newsom called the suit a continuation of the White House’s “political vendetta against California.” The Justice Department did not respond to CalMatters’ request for comment.

Even if the Justice Department succeeds at severing California and Québec’s five-year carbon-trading partnership, it will not stop the two markets from running independently.

In the meantime, California Air Resources Board chief Mary Nichols said the carbon-trading program will continue as is. “Nothing in this complaint changes the current operation of the cap and trade program,” she said in a statement emailed to CalMatters.

Still, IETA warned about potential fallout from lengthy litigation. “The attempt to terminate the link between California and Québec causes unnecessary market uncertainty by changing legitimate expectations of companies that invested in emissions reduction projects in the two jurisdictions,” the organization’s statement said.

IETA’s concerns echo those of other industries touched by the Trump administration’s rollbacks. Auto manufacturers, for example, warned the president of the “untenable” litigation and instability that could come from a battle with California over vehicle emissions rollbacks. The president proceeded to revoke California’s authority to curb greenhouse gases in tailpipe emissions, prompting California, 22 other states, the District of Columbia, and two cities, to sue.

While independent analyst Chris Busch, research director for the energy and environmental policy think tank Energy Innovation, expects the lawsuit to inject uncertainty into the market, he doesn’t foresee an overwhelming increase in costs for California’s polluters. Even if California loses the case, he said, “California’s market is large and mature enough to succeed without Québec,” he said.

Still, he said, Trump’s action could carry costs for Californians: “Our policymakers playing defense instead of doing what they’d rather be doing — making good policy.”

Observers say that the potential for chaos in the Golden State is a feature, not a bug, of the federal attacks on California’s climate policies.  “That’s part of the game, right?” said Michael Wara, director of the Climate and Energy Policy Program at Stanford University. “It’s the chaos presidency, and one of the strategies is to create chaos in California so that California can’t achieve its policy goals.”

California’s efforts to cut greenhouse gas pollution hinge largely on cap and trade, a program that relies on the market to drive cuts in greenhouse gases across the economy.

The California Air Resources Board has called it “fundamental to meeting California’s long-range climate targets at low cost,” although independent experts worry that the program might fall short of cutting emissions enough to hit state targets.

Under its cap-and-trade system, California doles out a limited number of pollution permits to major greenhouse gas emitters like heavy industry, electricity generators, and oil refineries. The state gives out some of these permits for free; others are offered up at auctions. Companies can also trade permits.

Over time, the number of permits the state issues dwindles — forcing companies to either cut their greenhouse gas pollution or buy and trade more expensive permits. “You can think of it as a game of musical chairs,” said Danny Cullenward, policy director at climate change think tank Near Zero. The idea is that over time, there should be fewer and fewer chairs offering companies refuge from actively cutting their emissions.

When California linked its cap-and-trade system with Québec’s in 2014, it increased the number of available chairs by allowing California companies to use permits issued by Québec to meet the state’s greenhouse gas limits — and vice versa.

The Justice Department is challenging California’s agreement to hitch up with Québec in the first place. The lawsuit argues that the deal constitutes a treaty or compact with a foreign power, which, the department’s Clark said in an announcement, “undermines the President’s ability to negotiate competitive agreements with other nations.”

John Sims, a constitutional law expert and professor emeritus at the McGeorge School of Law, said the complaint smacked of public relations more than legal theory. “It’s just screaming and yelling and thumping the drum objecting to the policies that California is pursuing,” he said. “The legal technicalities about whether California is allowed to do what it’s doing almost gets lost in the bushes.”

For instance, the suit references a previous Supreme Court decision that states can’t interfere with federal foreign policy. But Sims said it’s unclear that applies to this case. “Is California frustrating federal policy? That’s the big question here,” he said. “From looking at this complaint, I just don’t think that’s going to be easy to determine.”

David Wright, a law professor at the University of Calgary, said he isn’t surprised to see the White House arguing that states and cities can’t form international treaties or compacts on their own. His question, however, is whether the document that California and Québec signed fits into those categories — and Wright doesn’t think it does.

After all, the preamble of the document explicitly says it “does not, will not and cannot be interpreted to restrict, limit, or otherwise prevail over each Party’s sovereign right and authority” to change their respective programs.

“It doesn’t take long to read the agreement and come to the conclusion that it is not an international treaty,” Wright said.

Plus, if it is an agreement, it’s a very weak one that’s nothing close to a treaty, according to Wright. Ontario, which was briefly part of California and Québec’s cap-and-trade partnership, pulled out in 2018 after the election of a new premier who had vowed to scrap the program. “They left with virtually no notice, arguably breached the withdrawal of the linking agreement, and there was virtually no fallout of it,” Wright said.

Still, he said, “I don’t have a crystal ball. It’s difficult to predict what direction the court will go.”

In the meantime, groups covered by cap and trade are bracing. While the Western States Petroleum Association declined to comment, a spokesperson pointed CalMatters toward a 2017 statement supporting California’s cap-and-trade program. Oil giant Chevron also declined to comment.

Carbon-trading advocacy group IETA, whose members include Chevron, said in a statement “the Trump Administration’s complaint could force a loss of market-based efficiencies, potentially increasing the overall costs of carbon emissions across the two jurisdictions.”

California’s manufacturers share those concerns. Gino diCaro, vice president of communications for the California Manufacturers and Technology Association, told CalMatters that a cap-and-trade system that includes — and extends beyond — Québec could help reduce the cost of compliance for manufacturers.

“California wanted to lead on greenhouse gas emissions. The best way to lead was to have a cap-and-trade system that others followed, and implemented themselves, and connected with the program,” diCaro said. “To the extent that the lawsuit is trying to undo that is not necessarily good for California’s manufacturing competitiveness.”

In the short term, market prices for pollution permits have gone the opposite direction, and dropped since the Department of Justice’s announcement on Wednesday, according to Cullenward.  “Unfortunately I would expect that market worries won’t be resolved soon,” he said. “Although I don’t expect an outcome so dramatic as a major collapse in demand, it’s conceivable that demand will weaken along with prices—and that means lower revenues.”

And while Busch said he doesn’t know what to expect for the future, he did point to two things that could limit any price increases worrying IETA and diCaro. For one thing, speculators — essentially, carbon market scalpers that buy up pollution permits to sell when prices increase — might hold off on investing in those permits while the lawsuit plays out. That could decrease demand, driving prices down.

For another, Québec is expected to buy more pollution permits from California than vice versa in the coming years, Busch said. Cutting ties could cut demand for California’s permits, pushing the price down.

Experts knew there was a possibility that California might be forced to break up with Québec even before the federal lawsuit, according to Cullenward. “The risk that a hostile federal government could do this was well known to policymakers and key market insiders, even if many of today’s market participants were caught unaware,” he said.

That’s the challenge with a market-based system for cutting greenhouse gases. “Markets have a tendency to be skittish in the face of bad news,” Cullenward said. “California is no different.”

Still, Stanford’s Wara doesn’t think the case will mean much to California’s industries in the near future. “Best case, we win, nothing happens,” he said. “Worst case, we lose, we delink from Québec, and then cap and trade in California sails on much like it would have before.”

In the meantime, Busch expects California to press pause on creating international cap-and-trade deals. California Air Resources Board Spokesman Dave Clegern said the air board wasn’t proposing any. “We have conversations with many organizations and governments, but we have proposed no other linkages,” Clegern said in an email.

The big question will be whether there’s enough time for the case to reach a decision in the U.S. Supreme Court before the next presidential election. If it doesn’t, a new president could decide to drop it.

Ultimately, Wara said, “What really matters is protecting the environment, not winning lawsuits.”

Sims expects the case to linger in court for years — but he suspects that the federal government doesn’t care. “Winning this case three years from now is the least of their concerns. There’s a political battle going on and they want to seize the initiative and they want to push back,” he said. “Filing a complaint is really cheap and easy. You just write up whatever you want and you file it — and that’s what they did.”