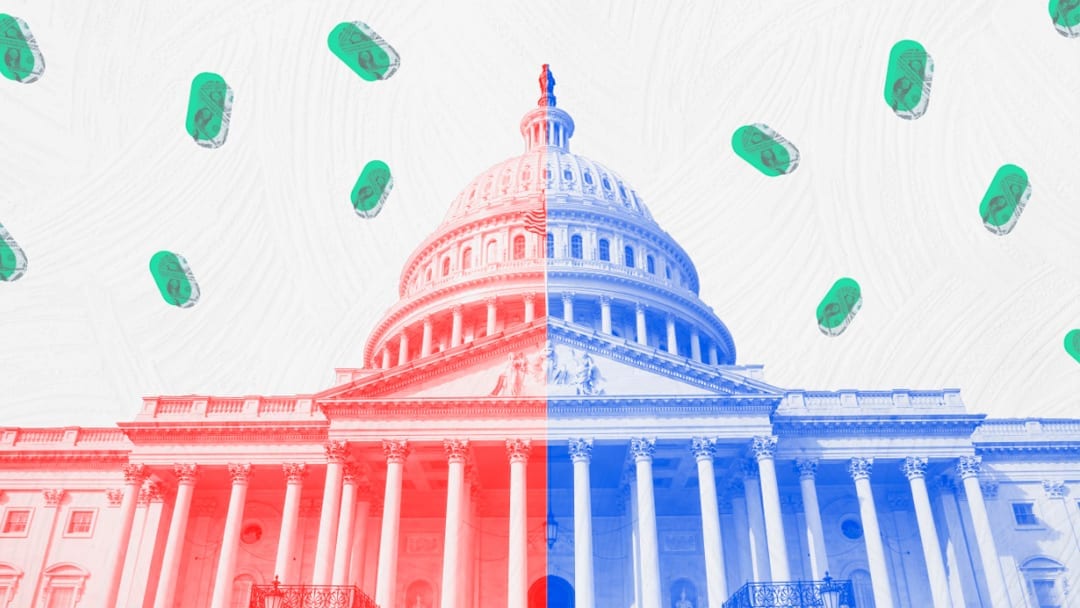 House Democrats are poised to pass sweeping legislation to lower drug prices using strategies President Donald Trump has endorsed. A Trump aide urged the Republican-controlled Senate to vote on a different package curbing drug prices that was drafted by a senior Republican.

With such broad and bipartisan support, why do the odds look grim for Congress to pass significant drug pricing legislation this year?

Because whether it’s sharing the credit for a legislative victory with the other party or running afoul of the powerful drugmaker lobby, neither Democrats nor Republicans are sure the benefits are worth the risks, according to several of those familiar with the debate on Capitol Hill.

Complications From ‘Medicare For All,’ Impeachment

Senate Majority Leader Mitch McConnell, who is a Republican and controls what legislation gets to the Senate floor, has said he will not allow a vote on the House Democrats’ legislation. Among other things, the bill written by House Speaker Nancy Pelosi and other Democratic leaders would enable federal health officials to negotiate the prices of as many as 250 of the most costly drugs. Although Trump has endorsed that tactic, most Republican lawmakers oppose it because they are philosophically opposed to interfering with the market.

On Friday, Trump’s chief domestic policy adviser, Joe Grogan, said any drug pricing legislation would need bipartisan support, saying of Pelosi’s plan: “It is not going to pass in its current form.” He said the White House supports the bipartisan package drafted by Sen. Chuck Grassley (R-Iowa), who chairs the Finance Committee, and the committee’s top Democrat, Sen. Ron Wyden of Oregon.

But many Senate Republicans in particular are uncomfortable with one of the bill’s key provisions: a requirement that drugmakers not raise their prices on drugs covered by Medicare faster than the rate of inflation.

Asked whether the White House supports the inflation caps, Grogan said they were “not the administration’s proposal, but they are the product of a bipartisan compromise, and they are the route to a bipartisan bill, in our opinion.”

In a recent interview, Grassley spokesman Michael Zona dismissed the call from other Republicans to eliminate the provision. “There’s no need,” he said. “The bill passed with a bipartisan two-thirds majority in committee, and support’s growing for the bill every week among Republicans.”

While the Senate Finance Committee did vote 19-9 in July to send the Grassley-Wyden bill to the full Senate for consideration, some Republicans who voted to advance it cautioned then that they may not ultimately vote for the bill.

While considering the bill, all but two of the committee’s Republican members voted to kill the provision to prevent Medicare drug prices from rising faster than inflation. Grassley, however, got Democratic support and it stayed in the bill.

But it’s not clear if the bill will come to the floor. McConnell is known to be unwilling to corner Senate Republicans with votes that could be politically risky during campaign season, whether due to criticism from Democrats or pressure from the drug industry.

In addition, the push by some progressive Democratic presidential candidates for a government-controlled “Medicare for All” health system has not made it more appealing for Republicans to work with Democrats on health care issues, said Kim Monk, a health care analyst and partner at Capital Alpha Partners who used to work for Republicans in the Senate.

“Why would Republicans stick their neck out while Democrats are fighting over Medicare for All?” she asked.

And Senate Minority Leader Chuck Schumer of New York, a Democrat, has drawn a line insisting any health care legislation come with protections for those with preexisting conditions. That’s a risky conversation for Republicans, because a federal appeals court is considering a lawsuit brought by Republican states seeking to throw out the entire Affordable Care Act, which guarantees those with medical conditions can get coverage.

Still, polling suggests that the issue of drug pricing has the power to motivate voters to support one party or the other, and that is likely to motivate lawmakers.

There are more Senate Republican incumbents up for reelection next year than Democrats, and several are considered vulnerable.

Meanwhile, Democrats might be able to argue that they sought to tackle the issue of prices, but Republicans backed away from it.

The decision by House Democrats last month to pursue an impeachment inquiry against Trump has no doubt poisoned the waters between the parties. But the prospects have not looked promising anyway for a comprehensive, bipartisan package of solutions to rein in escalating drug costs.

Acknowledging their problems with the Pelosi and Grassley-Wyden proposals, some Republicans are touting a modest measure that has failed to become law in the three years since it was introduced: the CREATES (Creating and Restoring Equal Access To Equivalent Samples) Act.

The CREATES Act does not take a direct approach to lowering prices. Nonetheless, based on political opposition to the larger packages, it could be some of the only drug-pricing legislation that passes this Congress. The bill would crack down on tactics used by brand-name drug manufacturers to dissuade generic competitors, aiming to eliminate anti-competitive behavior and allow the free market to bring down prices.

Specifically, it would empower generics manufacturers to sue brand-name drugmakers that block them from obtaining the samples needed to conduct studies and get Food and Drug Administration approval of their versions. It would also give the FDA more leeway to approve alternative safety protocols for high-risk drugs. Currently generic drugmakers are required to join with the brand-name manufacturers in a shared safety system for those drugs, but some brand-name companies refuse to negotiate with the generic companies, thus delaying their ability to get FDA approval.

It is the rare piece of legislation with support from the likes of progressive Sen. Sheldon Whitehouse (D-R.I.) and conservative Sen. Mike Lee (R-Utah).

But the bill has hit snags before. The brand-name drug industry trade group, the Pharmaceutical Research and Manufacturers of America, has opposed the CREATES Act in the past. With its heavy spending on lobbyists, advertisements and campaign contributions for lawmakers, it has been a powerful opponent.

Opposition softened earlier this year, though, when executives from seven of the world’s biggest drugmakers told the Senate Finance Committee they are in favor of the bill.

“We support the overall intent of the CREATES Act,” Holly Campbell, a PhRMA spokeswoman, said in an email. She added that drugmakers “should not withhold samples with the intent of delaying generic or biosimilar entry.”

Facing the prospect that Congress could fail to pass bigger fixes like the Pelosi or Grassley-Wyden plans, some say CREATES could be used to offset the cost of health care programs like community health center fundingthat will soon expire if Congress does not extend them.

In July, the Congressional Budget Office estimatedthat the CREATES Act could save the federal government $3.7 billion over 10 years.

But even some of CREATES’ supporters say it is not enough to lower drug prices.

“The idea that Congress is going to lower prescription drug prices without reforms to Medicare is nonsensical,” said Zona, Grassley’s spokesman. He added that the CREATES Act, which Grassley originally co-sponsored, is important. “But it’s only one piece of the puzzle.”

House members were home in their districts last week, and when they return, they expect to focus on passing spending bills before a Nov. 21 deadline to advert a government shutdown, before voting on Pelosi’s plan.

In the meantime, some are cautious in their predictions about whether Congress can pass significant drug pricing legislation before 2020, when the election campaign may prompt lawmakers to retreat further into their respective partisan corners.

Chip Davis, the chief executive of the generic drugmakers’ Association for Accessible Medicines, said that even though there is increasing agreement that the government needs to act to help curb drug price increases, the two parties are approaching it in very distinct ways.

“It remains to be seen,” he added, “whether those differences of opinion can be reconciled into a package that can get enough support in both chambers.”

Kaiser Health News(KHN) is a national health policy news service. It is an editorially independent program of the Henry J. Kaiser Family Foundationwhich is not affiliated with Kaiser Permanente.