A Matter of Life and Death: Group to Pull Plug on Life-Saving Aid It Gives to Nearly 4,000 California Dialysis Patients 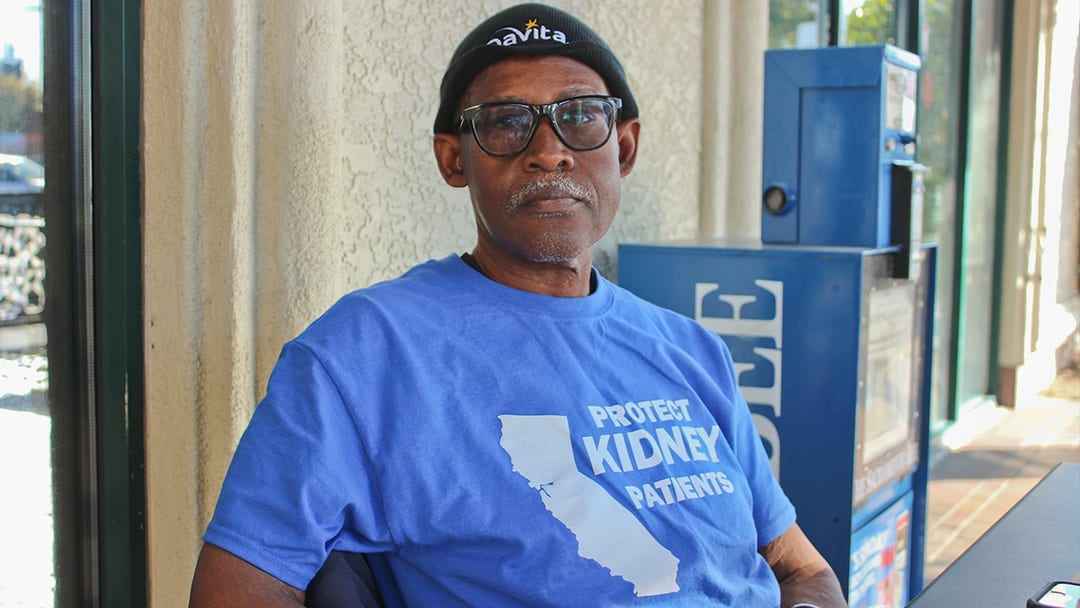 Russell Desmond received a letter a few weeks ago from the American Kidney Fund (AKF) that he said felt like “a smack on the face.”

The organization informed Desmond, who has kidney failure and needs dialysis three times a week, that it will no longer help him pay for his private health insurance plan – to the tune of about $800 a month.

“I am depressed about the whole situation,” said the 58-year-old Sacramento resident. “I have no clue what I’m going to do.”

Desmond has Medicare, but it doesn’t cover the entire cost of his care. So, with assistance from AKF, he pays for a private plan to cover the difference.

Now, the fund, which helps about 3,700 Californians pay their premiums and out-of-pocket costs, is threatening to pull out of California because of a new state law that is expected to cut into the dialysis industry’s profits – leaving patients like Desmond scrambling.

The letter portrayed the fund as helpless. “We are heartbroken at this outcome,” it read. “Ending assistance in California is the last thing we want to do.”

But supporters of the new law are calling the threat a scare tactic. State Assemblyman Jim Wood (D- Healdsburg), the author of AB-290, said there is nothing in the measure that prohibits the fund from continuing to provide financial assistance to patients.

“AKF has simply made a conscious decision, without merit, to leave the state despite the many accommodations I made by amending the bill in the Senate to ensure that it can continue to operate in California,” Wood said in a written statement.

What’s behind this dispute, critics of AKF Say, is the tight relationship between the fund and the companies that provide dialysis, which filters the blood of people whose kidneys are no longer doing the job.

People on dialysis usually qualify for Medicare, the federal health insurance program for people 65 and older, and those with kidney failure and certain disabilities. If they’re low income, they may also qualify for Medicaid, which is called Medi-Cal in California.

The fund gets most of its moneyfrom DaVita and Fresenius Medical Care, the two largest dialysis companies in the country. The fund does not disclose its donors, but an independent auditof its finances conducted by the accounting firm CliftonLarsenAllen, LLP,  reveals that 82 percent of its funding in 2018 – nearly $250 million –  came from two companies. 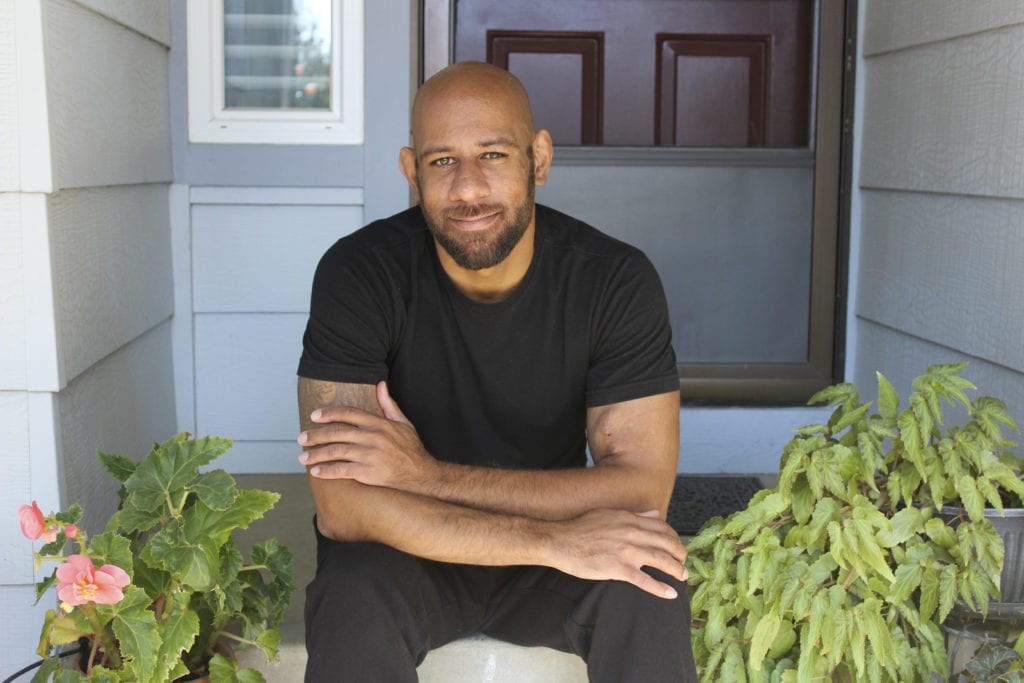 Brian Carroll says he had to move back in with his parents in 2016 after dialysis treatment because it left him too weak to work. Without premium assistance from the American Kidney Fund, he says he’ll face even more financial strain. (Ana B. Ibarra/Kaiser Health News)

Insurance plans, consumer advocacy groups and unions have accused AKF of helping dialysis providers steer patients into private insurance plans in exchange for donations from the dialysis industry. Wood said his bill is intended to discourage that practice.

Starting in 2022, the new lawwill limit the private-insurance reimbursement rate that dialysis companies receive for patients who get assistance from groups such as AKF to the rate that Medicare pays. The rate change won’t apply to patients who are currently receiving assistance as long as they keep the same health plans. The bill will also address a similar dynamic in drug treatment programs.

These disclosure requirements are spurring AKF’s decision to leave, Burton said. She argues that they conflict with federal rules and violate patient privacy.

“AKF has no choice but to leave or seek legal relief,” Burton said.

In mid-October, the fund started sending letters to its financial aid recipients in California warning of its departure. And Nov. 1, it joined two dialysis patients in filing suitagainst the state, asking a U.S. District Court to rule the law unconstitutional.

Gov. Gavin Newsom cautioned against such actions when he signed the bill, and urged “both opponents and supporters to put patients first.”

But as the threats and legal battle play out, patients are caught “squarely in the middle,” said Bonnie Burns, a consultant with California Health Advocates, a Medicare advocacy group.

Their options may be limited, she said. Those who don’t work won’t have access to employer-sponsored coverage to make up the difference. And in California, Medicare recipients under age 65 are not eligible to purchase supplemental insurance known as Medigap.

The state Department of Managed Health Care offers a fact sheetfor affected patients, directing them to programs such as Covered California and Medi-Cal.

Paige Hosler, vice president of insurance management at DaVita, said insurance counselors and social workers at the company’s clinics are working with patients to find other options. “We will continue to treat all patients, regardless of insurance status,” she said.

Hosler noted that some patients may qualify for DaVita’s charity care program.

Dialysis companies have been at the center of recent legislative and ballot-box battles, and have spent big to defend their bottom lines. Last year, they poured a record-breaking $111 million into a campaign to defeat Proposition 8, a ballot initiative that would have capped their profits. The measure failed.

The industry also spent about $2.5 millionin California on lobbying and campaign contributions in the first half of this year to oppose Wood’s measure.

Desmond said he understands why lawmakers targeted the dialysis industry but can’t fathom why they did so at the expense of patients.

Desmond was laid off from his job as a computer programmer in Massachusetts in 2009 and moved to California to join his brother. One year later, he was diagnosed with kidney failure.

He lives off his Social Security Disability Insurance benefits, which come to about $2,000 a month after his Medicare premiums are deducted. Medicare pays for 80 percent of his care.

He also qualifies for Medi-Cal coverage that comes with high out-of-pocket costs, so he relies instead on a private Aetna insurance plan to cover the remaining 20 percent.  The American Kidney Fund has been paying the premiums for his private plan since 2015.

“What they did is take away our life raft and left us to drown,” he said of lawmakers.

Brian Carroll, 40, of Sacramento, has been on dialysis for five years. He moved back in with his parents in 2016 because, he said, dialysis left him too weak to work.

“I am now completely depending on other people,” Carroll said. AKF pays the $270 monthly premium for his private insurance plan that covers what Medicare doesn’t.

“That’s an entire month of groceries and gas for me,” he said.

Carroll said he supported Proposition 8, even though dialysis companies argued that it would force them to cut back services and shut down clinics.

In this current situation, he’s not sure whom to blame – the lawmakers, who passed the law with no back-up plan for patients, or the fund, which is essentially holding patients hostage.

“What I do know is that you can’t just leave dialysis patients like this,” Carroll said. “It’s cruel.”

This story was produced by Kaiser Health News (KHN),which publishes California Healthline, an editorially independent service of the California Health Care Foundation.KHN is not affiliated with Kaiser Permanente.

Header Photo: Medicare doesn’t cover all of Russell Desmond’s health care costs, so, with assistance from the American Kidney Fund, he pays for private insurance to cover the difference. But if the organization cuts off aid, Desmond says, he has no idea how he’ll pay the $800 monthly premiums: “I am depressed about the whole situation.” (Ana B. Ibarra/Kaiser Health News)