California is about to allow former felons to serve on juries. Here’s why. 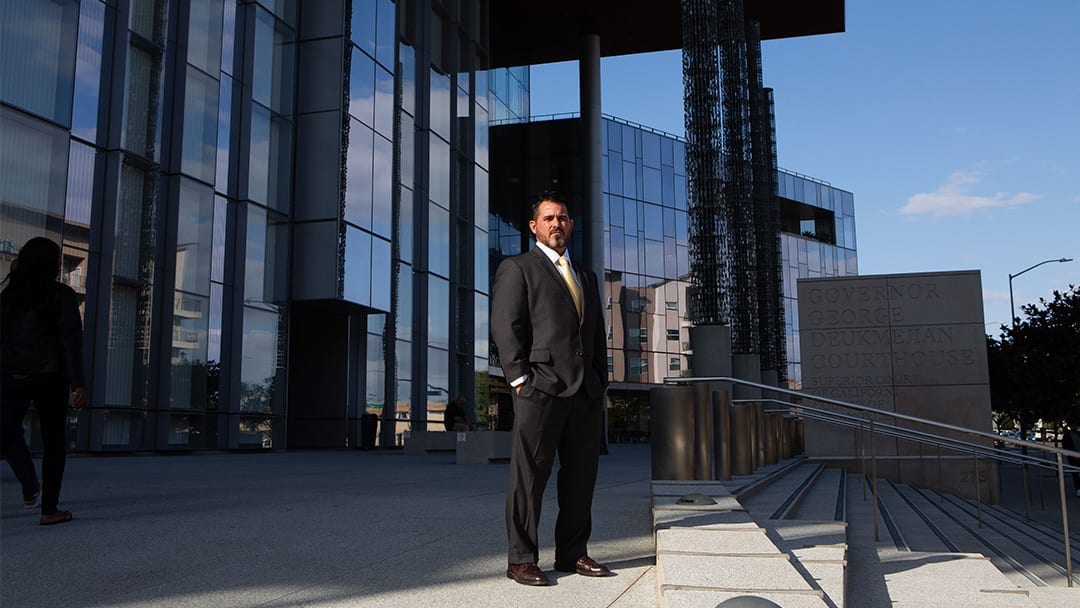 James Binnall is no stranger to the courtroom. He worked as a defense lawyer in San Diego on several homicide cases. Then he was summoned for jury duty at the same courthouse, and arriving via a special entrance designated for attorneys, began filling out his juror questionnaire.

Question #7 asked if he had ever been convicted of a felony. He checked “yes.”

Binnall had served prison time after a homicide conviction for driving drunk as a 23-year-old graduate student in 1999, crashing his car and killing his friend and passenger. While on parole, he went to Thomas Jefferson School of Law, graduating and maxing-out his seven-year sentence the same week. But he learned the day of his jury summons in 2009 that California prohibits former felons for life from serving on juries.

“When I finally became an attorney, I sort of felt like I had gotten over the hump. That I was back to being a full-fledged citizen,” Binnall said. “Walking home, it was, am I ever going to be able to transcend this criminal background that I have? It’s followed me since it happened and I’ve worked and worked and worked to put it behind me, and this is now a perpetual reminder.”

On Jan. 1, the rules will change. A new law by Berkeley Democratic Sen. Nancy Skinner will allow Californians with most former felony convictions who are no longer on parole or probation to serve on juries.

Advocates say the law brings California one step closer to solving racial disparities that exist in the jury selection process: One in five African-American men in California is barred from jury service because of a prior felony, according to 2017 research. And that complicates efforts to ensure every defendant a jury of his or her peers.

The opponents say former criminals should not be allowed to serve on juries because they are much more likely to be biased against police and prosecutors.

The Riverside Sheriffs’ Association fought the change, unsuccessfully arguing for an amendment to at least require a waiting period of good behavior before people could qualify for jury service.

“If we’re going to have felons serve as jurors, maybe that would be a good way to make sure that they’re abiding by the laws — because they’ve proven in the past that they don’t,” said Ryan Sherman of the association. “Here they are to be sworn-in as jurors to uphold the law, but their track record hasn’t demonstrated that they’re willing or able to do that.”

The California District Attorneys Association withdrew its opposition to the bill after a amendment banned registered sex offenders from juries.

“People come in with a lot of different opinions and that’s why we have voir dire so that we can talk to people and really identify if they have bias one way or another,” said association president and Alameda County District Attorney Nancy O’Malley.

During the part of jury selection known as voir dire, potential jurors are questioned by the opposing attorneys and the judge, who probe their background and possible biases. Lawyers are allowed to excuse a few potential jurors at this stage without stating a reason — a peremptory challenge — and can dismiss additional potential jurors for cause.

O’Malley said the voir dire process for those with former felony convictions won’t be very different from questions asked of other people. Take, for example, those charged with a misdemeanor DUI.

“They serve on juries,” O’Malley said. “There’s no prohibition for that, and some would say that often times, they’re really good jurors in a driving under the influence case because they understand what happened.”

Advocates of the law say that a former felon can use their knowledge to improve the justice  system.

When Binnall, the lawyer, was barred from juries, he decided to spend the next 10 years examining the role former felons can play in a jury. Today he’s an associate professor at CSU Long Beach.

In one study, he created mock juries and compared groups comprised of non-felons with juries including former felons. His conclusions: Juries without felons didn’t outperform juries with felons, and groups with felons also spent more time talking through deliberations.

In other research, Binnall interviewed former and prospective felon-jurors in Maine — the only state without juror restrictions for former felons. He found that those with convictions felt their jury service helped affirm their transition back into society.

California joins other states including Illinois and Oregon in changing the law to allow former felons to serve on juries, with some conditions.

“By excluding certain people, then we almost ensure that there are large groups of residents in California that will not be able to have a jury of their peers,” said Skinner, the new law’s author.

Public defenders echo similar sentiments. Brendon Woods, Alameda County’s chief public defender, said that while his county’s population is diverse, finding a diverse jury pool can be challenging. He said in one recent case, out of 92 potential jurors, only two identified as black;   in another, three out of 79 identified as black.

California law already allows former felons to vote. But Woods noted that they can’t serve as jurors even if their prior offense is no longer a felony. (Some crimes in California have been downgraded from felonies to misdemeanors since voters passed Proposition 47 in 2014.)

“For me, for my county, we have people who have been incarcerated who work on my staff, some for very serious, the most serious crimes,” O’Malley said. “Because I do believe that in California, many of us are recognizing that people with lived experience have a lot to contribute to the administration of justice.”

The next goal for advocates: requiring the system to use not just voter registration and drivers’ license records to summon potential jurors, but lists of California tax filers and utility customers.

They say that would make jury pools more inclusive, adding Californians who might not own a car or who don’t have a permanent address.

The idea was in Skinner’s original bill, but the extra cost to do so made key lawmakers balk. Before the proposal was amended out, the bill landed in the state’s suspense file where costly bills can quietly die.

Header Photo: James Binnall, associate professor of law, criminology, and criminal justice, photographed outside of the Long Beach Superior Court on November 21, 2019 in Long Beach, California. Photo by James Bernal for CalMatters (FOR USE WITH THIS STORY ONLY)