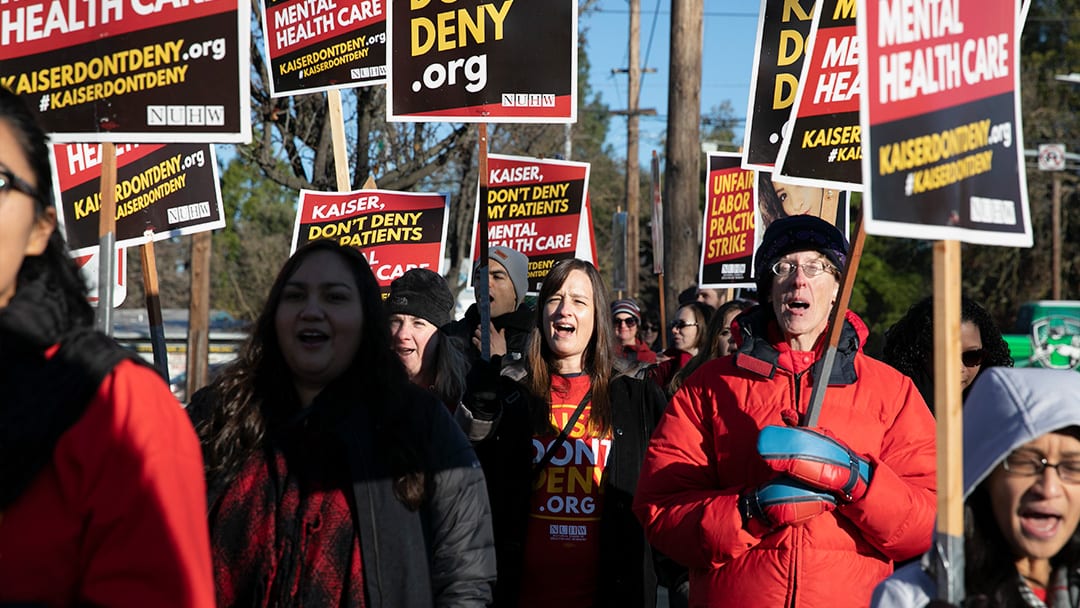 The state is facing mounting pressure to enforce parity laws that are supposed to guarantee equal care for physical and mental health issues — with a spotlight this week on mental health care problems at health giant Kaiser Permanente.

This week, Kaiser mental health clinicians are on a five-day strike, protesting long patient wait times and strenuous working conditions for providers. They say children and adults with serious mental health needs, including schizophrenia, anxiety and severe depression, are often waiting 6 to 8 weeks — sometimes longer — to see a therapist. And they contend that Kaiser’s behavioral health services have in many ways worsened in recent years, despite being under a corrective plan overseen by the state Department of Managed Health Care.

Striking clinicians on Thursday plan to march from the Capitol to the state agency to protest what they called “the agency’s failure to enforce parity legislation.” They specifically criticized the agency for not releasing reports from an outside monitor that would show whether Kaiser is meeting mental health access benchmarks outlined in a 2017 settlement agreement.

“If these were cardiac catheterization services that were not functioning, if a health plan was screwing those up, (the state) would jump on that and require those to be fixed right away,” he said. “Meanwhile they’re just sitting on their hands. We have people who are dying in the course of this failed enforcement by the DMHC.”

Seavey criticized Kaiser’s “massive influence” with the department, and said the union may call an open-ended strike in early 2020 if Kaiser does not improve mental health services.

After the state’s agreement with Kaiser in 2017, the health plan created a process to ensure that follow-up appointments are available in a timely manner, the state agency said in an emailed statement. Providers who cannot get their patients in for follow-up care are supposed to notify their managers.

The department fined Kaiser $4 million in 2013, but the plan did not agree to a settlement with corrective actions until 2017. That settlement agreement is publicly available. But while the state department receives regular updates about the plan’s progress,it says it keeps that information confidential “in compliance with federal and state laws.”

Kaiser spokesman Marc Brown called the strikes “disruptive to patient access, operational care and service and…frankly irresponsible.” In an emailed statement, he said this is the union’s sixth strike this year (Seavey said most of these strikes were done at individual clinics, as opposed to statewide).

“We take any concern raised about our care very seriously, and always investigate and respond thoroughly,” Brown said. “However, it is inappropriate for the union to file multiple, often unwarranted complaints, and attack Kaiser Permanente’s reputation.”

More than a dozen complaints the union has filed with the DMHC in the past year — and sought to publicize — decry violations of network adequacy rules, timely access rules and long appointment wait times, among others. One complaint said patients in Pasadena with schizophrenia, serious major depression and bipolar disorder were waiting three or four months for an appointment. Another complaint said therapists in San Francisco were being told to keep alternative paper wait lists — or tell patients to call back later — to hide its failure to see  children in a timely manner.

Frustration with access to mental health services at Kaiser extends beyond the HMO as well. According to a statewide poll by the Kaiser Family Foundation and the California Health Care Foundation released earlier this year, more than half of those surveyed thought that most people with mental health conditions are unable to get the services they need. A recent analysis by healthcare consultants Milliman Inc. showed that California patients were more than five times more likely to have office visits for mental health or addiction problems from providers outside their insurance plan’s network compared with their counterparts seeking medical or surgical care.

Concerned about these access problems, State Controller Betty Yee, who sits on the board of the California Public Employees’ Retirement System, wrote a letter to its executive officer requesting a series of hearings with its largest plans:  Kaiser, Anthem, Blue Shield and United Healthcare. Kaiser, with more than 640,000 enrollees, has by far the highest membership.

“We negotiate contracts; we have leverage,” Yee said Tuesday, as the CalPERS board was conducting its third hearing on the subject. “To the extent that parity is not guaranteed, we need to make sure that our plans are living up to the law.”

State Treasurer Fiona Ma, who also sits on the board, said she’s seen firsthand how her own mother and brother have struggled to get adequate, timely care for depression. She’s been writing letters asking plans to explain the long wait times and high cost of care, and the growing numbers of people suffering from mental illnesses. Plans need to get more creative in finding solutions, she said.

“Kaiser is out on strike again today,” she said. “Why is that? Is it because everything is going well? No, it’s because things are not going well in the system and patients are getting sicker and sicker.”

Kaiser and the Department of Managed Health Care both sent representatives to speak at a  November meeting of the CalPERS Pension and Benefits Committee.

DMHC director Shelley Rouillard told board members that day that the department takes its responsibility as a consumer protection agency very seriously, and outlined some of its offerings: a consumer help center, independent medical review process, regular monitoring of plans to ensure they have enough providers and enforcement actions against plans that violate timely access requirements. She said Kaiser has met all of the benchmarks of the 2017 settlement agreement so far.

But she also acknowledged that, in some cases, it takes years to correct problems with plans.

Cindy Striegel, a vice president at Kaiser, said it has hired more than 1,200 full-time therapists or clinicians since 2015, an increase of 30 percent. At the same time, she said, membership has grown about 20 percent. Kaiser is continuing to recruit and currently has about 300 positions posted or in the hiring process.

“This is not an issue or an area that we can solve overnight,” she said. “We can’t just throw more money at it. We can’t throw more effort at it. We’re doing the things that we feel are the most important. They just take some time to implement.”

Susan Whitney, a psychiatric social worker at the Kern County Kaiser Medical Center in Bakersfield, said she has worked for Kaiser for 15 years. Since the state first cited Kaiser in 2013, she said, “access to care has definitely gotten worse.” She believes that’s because the state has focused its scrutiny on how long it takes to get patients in the door for an initial appointment.

“People can get in right away to be seen, but then we’re left saying we don’t have a follow-up appointment for them for 6 to 8 or 12 weeks,’” she said. Whitney, who works with children and teenagers, said those delays in follow-up care exist even for children have anxiety so bad they can’t go to school, or show signs of being suicidal. The network of community providers that Kaiser sometimes outsources care to has been “completely overwhelmed,” she said.

“There is no therapy treatment model where you see a provider every 6 to 8 weeks,” she said. “Therapy just doesn’t work that way.”

Vicki Hoskins, a psychiatric therapist at Kaiser’s Euclid Medical Offices in Anaheim, said last week she spent the day on the phone telling patients in crisis they can’t get an appointment for a therapist until March.

“It’s super stressful,” she said. “Everyone’s frustrated. It’s always been bad, but this is the worst it’s ever been.”

She attributes the problem, in part, to Kaiser adding members before they build up their base of clinicians, along with greater awareness of suicidality and depression. A reduced stigma around mental illness also has led more people to seek help.

“When someone finally decides to seek help and then are told they can’t get help for 3 months, it makes them feel worse,” she said.

Des Michel, 27, from Oakland, said they reached out to Kaiser in July of 2018 in crisis, seeking care for gender identity affirming therapy. Michel’s first appointment was at the end of October, at which point they received referrals to Beacon Health Services and then, a few months later to Magellan.

“It was overall, and still is, a very negative experience for my mental health,” Michel said. “It’s been a year and a half. I’m probably just going to suck it up and pay privately, but financially and ethically it wasn’t something I wanted to do because I feel strongly that Kaiser has an obligation to their patients to be providing mental health care.”

Jeanette Zollinger, 42, of Thousand Oaks, said she, too, ended up paying out of pocket to see an outside therapist when she was having a “pretty rough breakdown.”

“It was literally life-saving,” she said. “I really didn’t feel like I had an option to go through Kaiser when I really needed help. They just didn’t have the staffing.”

Rouillard at the state Department of Managed Health Care maintains that the state is doing its job, but it is challenging given the shortage of providers.

“Access to behavioral health care services is a very high priority for our governor and for the Secretary of the Health and Human Services Agency,” she said. “The department has been working hard to ensure health plans comply with all requirements regarding timely access to care and federal and state mental health law — parity laws.”

Critics are unconvinced. Meiram Bendat, a Los Angeles attorney and psychotherapist, won a much-touted case this spring in which a Northern California federal court found that United Behavioral Health had wrongly restricted treatment for patients with mental health and substance abuse disorders in order to cut costs.

Kaiser therapists “have every reason to be fed up with the DMHC, which over the years has created an illusion of public service by fining it a few million dollars – trivial penalties that have no actual deterrent effect,” he said. He said Kaiser could compensate for network inadequacies by covering out-of-network mental health treatment at billed charges

“If DMHC were truly committed to mental health reforms and not just to its public image, it would have insisted on such measures long ago,” he said.

Jocelyn Wiener is a CalMatters contributing writer. Her reporting is made possible by a grant from the California Health Care Foundation.