While official election results will not be finalized until October 22, preliminary election results on Tuesday night show that Californians have decided to keep Governor Gavin Newsom in office.

According to the New York Times live election results, 64 percent of votes have been counted so far, with approximately 66 percent of voters responding “no” to the initial question: “Should Gov. Gavin Newsom be recalled?”

As the Associated Press and NBC projected Gov. Newsom’s defeat of the recall just a few hours after polls closed, Gov. Newsom tweeted his gratitude to California.

“Tonight, California voted NO on the recall and YES to…Science. Women’s rights. Immigrant rights. The minimum wage. The environment. Our future. We rejected cynicism and bigotry and chose hope and progress. Thank you, California.” 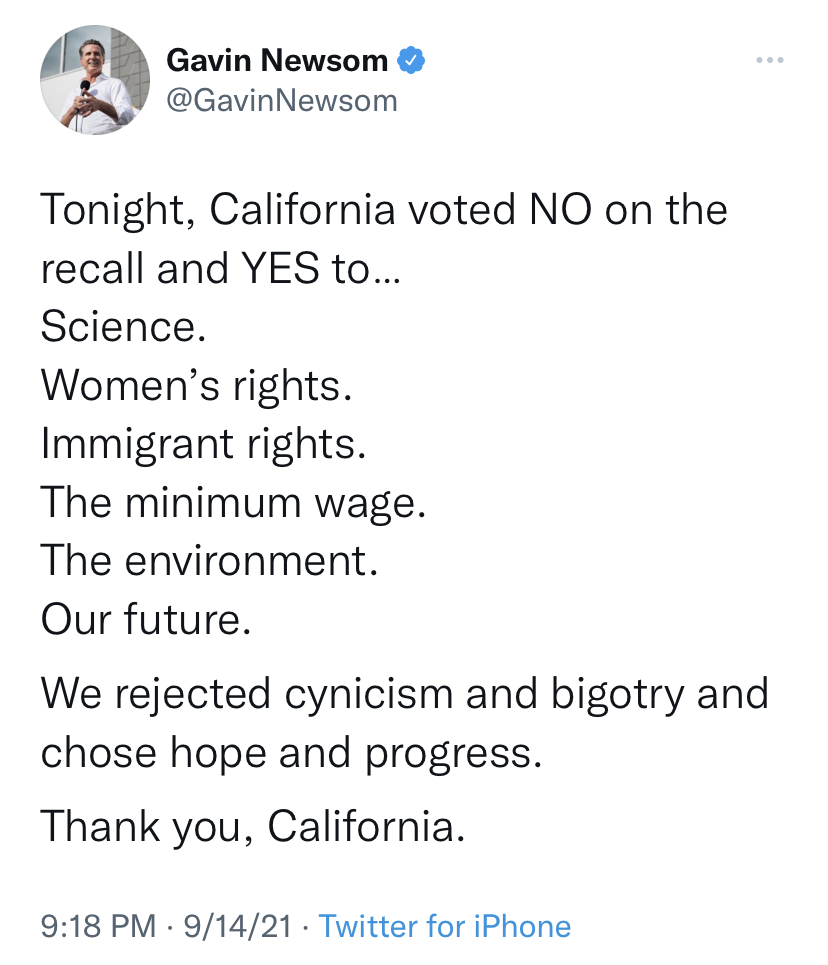 Gov. Newsom tweeted his gratitude to voters in California (Image via Twitter).

Republican contender Larry Elder emerged as the frontrunner among the list of candidates who were gunning to replace Newsom. Cal Matters election results show that Elder gained the most votes among replacement candidates, earning 43 percent of the votes.

Elder held a watch party in Orange County on Tuesday and once results were called, Elder conceded, according to the New York Times.

“Let’s be gracious in defeat,” Elder said, as reported by NYT. “We may have lost the battle, but we are going to win the war.”

How the Inland Empire is Voting

Residents of Riverside County and San Bernardino took to Twitter to express their thoughts on the unofficial election results, recognizing that support for Governor Newsom to remain in office during the recall election surpassed the votes he received during his 2018 election. 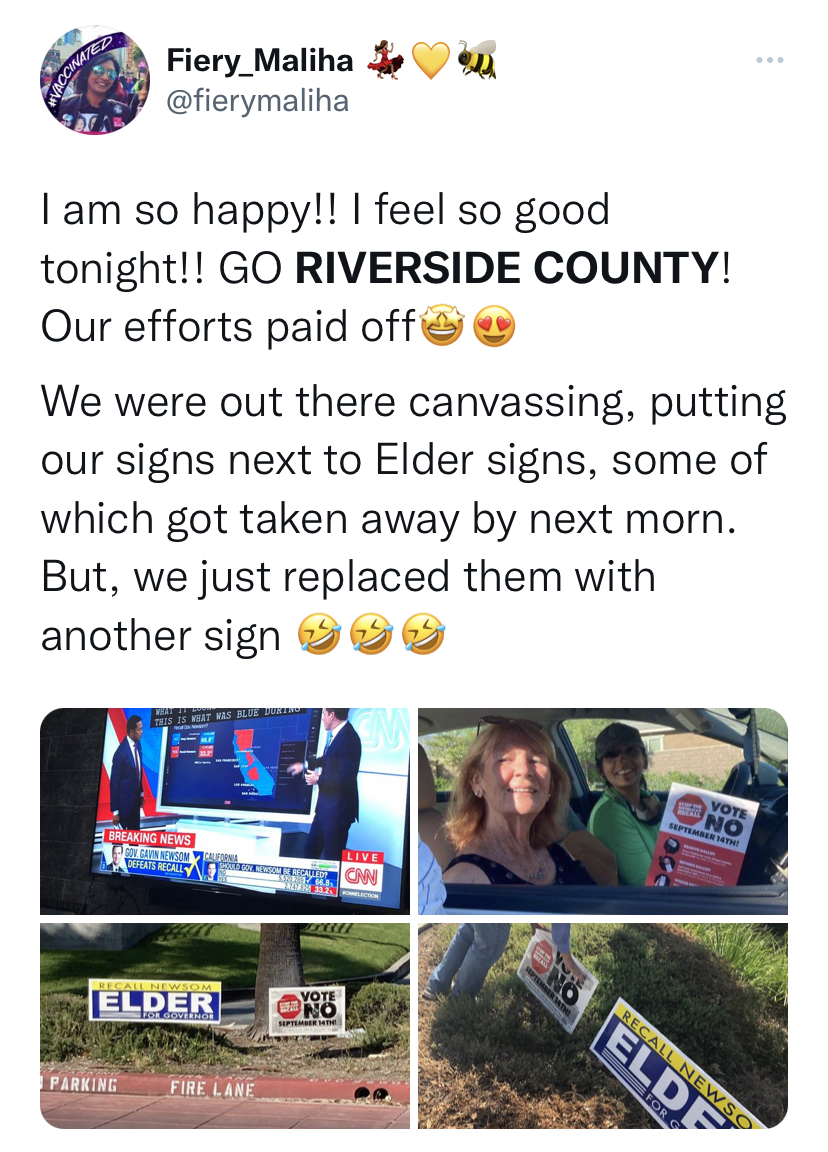 Maliha Williamson, president of the Riverside County National Organization for Women, took to Twitter to express her excitement for Gov. Newsom’s recall defeat (Image via Twitter).

Riverside County precincts are partially reporting more than 85 percent of votes that have been counted, with vote-by-mail, provisional and other ballots still being processed. Unofficial county results show that an estimated 54 percent of the population voted to keep Newsom in office while roughly 46 percent voted to remove him from office.

San Bernardino County precincts are partially reporting a lower percentage of votes counted. So far, about 24 percent of votes have been counted, but the results appear to weigh in Newsom’s favor with approximately 57 percent of the ballots counted voting to keep Newsom in office.

Preliminary results in the map show regions in the state that voted “yes” to the removal of Gov. Newsom from office is marked by green and regions that voted “no” are marked by red (Map and data courtesy of the Office of the California Secretary of State).

Tuesday’s recall election marked the second time in the state’s history that a recall election was held to remove a sitting governor. Unlike Newsom, former governor Gray Davis was defeated in the recall by Republican candidate Arnold Schwarzenegger.

This time around no Democratic challengers made headlines unlike in 2003 when Democratic candidate and then Lieutenant Governor Cruz Bustamante ran against Davis. During Tuesday’s recall election, results showed that Kevin Paffrath, one of the nine candidates listed as a Democrat on the ballot, only earned about 11 percent of the votes as a replacement candidate.

Gov. Newsom remains in office until the gubernatorial election takes place in November 2022.

“Now, let’s get back to work,” Newsom tweeted Tuesday night.

Breanna Reeves is a reporter in Riverside, California, and uses data-driven reporting to cover issues that affect the lives of Black Californians. Breanna joins Black Voice News as a Report for America Corps member. Previously, Breanna reported on activism and social inequality in San Francisco and Los Angeles, her hometown. Breanna graduated from San Francisco State University with a bachelor’s degree in Print & Online Journalism. She received her master’s degree in Politics and Communication from the London School of Economics. Contact Breanna with tips, comments or concerns at breanna@voicemediaventures.com or via twitter @_breereeves.

We use cookies on our website to give you the most relevant experience by remembering your preferences and repeat visits. By clicking “Accept”, you consent to the use of ALL the cookies.
Do not sell my personal information.
Cookie SettingsAccept
Manage consent

This website uses cookies to improve your experience while you navigate through the website. Out of these, the cookies that are categorized as necessary are stored on your browser as they are essential for the working of basic functionalities of the website. We also use third-party cookies that help us analyze and understand how you use this website. These cookies will be stored in your browser only with your consent. You also have the option to opt-out of these cookies. But opting out of some of these cookies may affect your browsing experience.
Necessary Always Enabled
Necessary cookies are absolutely essential for the website to function properly. This category only includes cookies that ensures basic functionalities and security features of the website. These cookies do not store any personal information.
Non-necessary
Any cookies that may not be particularly necessary for the website to function and is used specifically to collect user personal data via analytics, ads, other embedded contents are termed as non-necessary cookies. It is mandatory to procure user consent prior to running these cookies on your website.
SAVE & ACCEPT