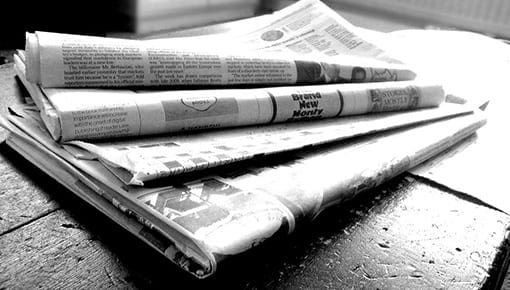 Chronicling the Persecution, Progress, Passion, Power and Enduring Promise of a People

“We didn’t exist in the other papers. We were neither born, we didn’t get married, we didn’t die, we didn’t fight in any wars, we never participated in anything of a scientific achievement. We were truly invisible unless we committed a crime. And in the BLACK PRESS, the negro press, we did get married. They showed us our babies when born. They showed us graduating. They showed our PhDs.”
– Vernon Jarrett, Soldiers Without Swords

When Freedom’s Journal was published in 1827, an enslaved people who were silenced for generations at long last found a voice. The fledgling publication affirmed their humanity, reported their truths and raged against the oppressive mindset that held them in bondage.

The small publication, a pamphlet by today’s standards, survived just a few brief years, yet it established a foothold in print media, defined a tenuous framework, laid a foundation and charted a way forward for other Black news publishers to follow.

From the North Star to the Chicago Defender to Black news publications like the Detroit Tribune, the Pittsburgh Courier, and New York’s Amsterdam News, to California’s first Black newspaper, the California Eagle (originally the California Owl), Black publishers in California are continuing the legacy.

In the early years, Black news publishers persevered despite a target market of which the majority were enslaved and who, when initially freed, could neither write nor read. They persevered despite taunts and threats having recognized the power of the press and the profound importance of telling the stories of their people not only during their own time but also for the future.

Like other publications, Black newspapers wrapped themselves in the promised of the First Amendment, uncertain if this promise, like every other promise of America, would hold true for them as well. Even in the face of this they continued to “press” forward and in the process tested the limits of their first amendment privileges. They were determined to tell the stories of their people, to speak truth to power, to acknowledge their struggles, celebrate their successes, and call Black Americans to right action with a clarity of purpose uniquely their own.

From the days of patty rollers to the lynching years; from civil rights era bombings to police brutality inherent in the New Jim Crow, the Black press has shown a light on the endangered lives of Black Americans and by proxy, Black Californians.

Repeatedly, the Black press in California has shown the residents of this state are not  immune to the harsh reality of Black life in  America—from the killing of one King in Tennessee to the violent beating of another King in Los Angeles; from the shooting death of Tyisha Miller in Riverside to the hanging death of Sandra Bland in Waller, Texas; from the Fruitvale murder of Oscar Grant III in Oakland to the shooting death of Jordan Edwards in Balch Springs, Texas; from the body of Stephon Clark in Sacramento to the body of Laquan McDonald in Chicago, Illinois, the California Black Media has linked the plight of Black Californians to the rest of the nation in ways that have called the world to attention and held those in authority to account.

The Black press in California has rallied readers to the polls, pressed legislators for parity in education, pushed for health care, challenged a broken criminal justice system and spoken against unjust wars. Their reporting added to the chorus of voices that ultimately ended apartheid in South Africa and told the stories of liberation as one nation after another in Africa threw off the yokes of Imperialism.

They’ve reported on famine abroad and hunger at home; sounded the alarm on the scourge of Aids and its impact on Black lives in California, the nation and its unmitigated impact on the African continent and elsewhere in the diaspora.

With limited resources and committed teams, California’s Black press has focused on the agony and the ecstasy of their communities with integrity while they embraced with equal intensity the importance of telling the stories that celebrate the accomplishments, pride promise of Black people. These stories continue to include groundbreaking successes in education, business, politics, medicine, space, science, literature, the environment, music, the arts entertainment in ways that are uniquely their own.

Black Californians are making news and California’s Black press continues to tell those stories knowing full well, as they are reporting today’s news they are also writing a people’s history.