The Measles Success Story In California Shows Signs Of Fading 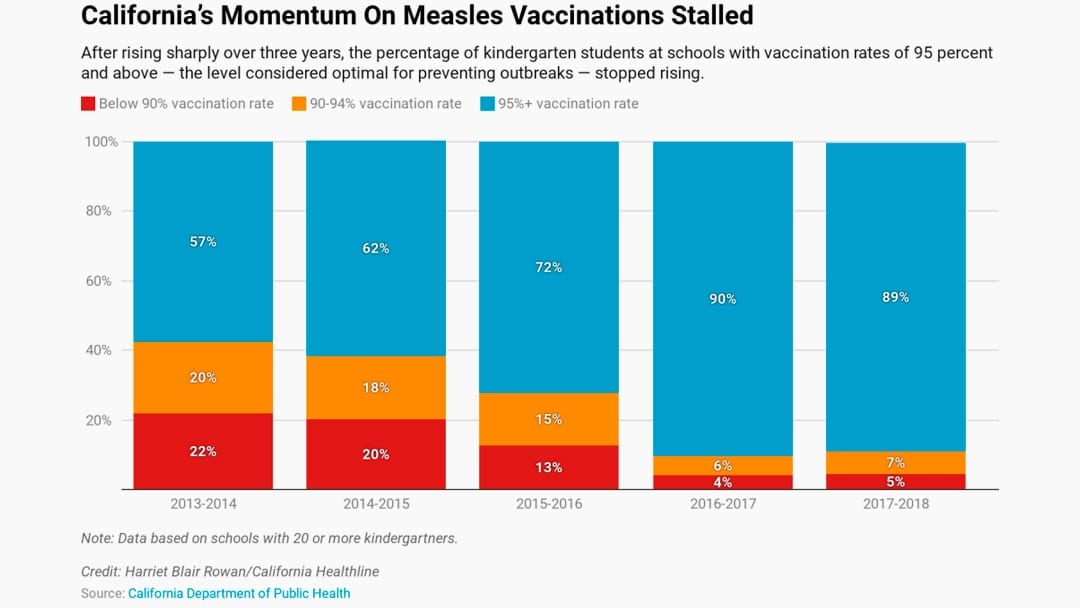 A rash of recent measles outbreaks in New York, Texas, and Washington state, shines a light on California’s largely successful effort in recent years to suppress the disease — though some of the shine might be fading.

A serious measles outbreak that started at Disneyland in December 2014 and carried over into 2015, contributed to a steep increase in vaccination rates among California kindergartners over the following three years. But the gains stopped last year, according to the most recent available data.

In the 2013-14 school year, which immediately preceded the Disneyland outbreak, the percentage of kindergartners enrolled in schools boasting vaccination rates of 95 percent or above — considered the optimal level to avoid contagion — stood at 57 percent. By the 2016-17 academic year, the percentage of kindergarten pupils in schools with optimal vaccination rates had hit 90 percent. In 2017-18, however, it dipped slightly back below 90 percent.

Measles has again gained attention because of five outbreaks so far this year in the U.S., including a serious one in Washington state. Through the first week of February, 101 measles cases have been reported across 10 states. That’s compared with a preliminary count of 372 for all of 2018 and 120 in 2017.

California’s favorable trend had accelerated dramatically after officials, galvanized by the Disneyland-linked infections, implemented a law in 2016 that eliminated a loophole through which parents were allowed to enroll their children in school without vaccinating them if they claimed that vaccinations violated their personal beliefs.

But another kind of exemption was still allowed. Over the past three years, vaccination exemptions signed by doctors on medical grounds have more than tripled, though they are still at a low level. This suggests that parents who once cited personal beliefs to avoid inoculating their kids might be claiming medical reasons instead. 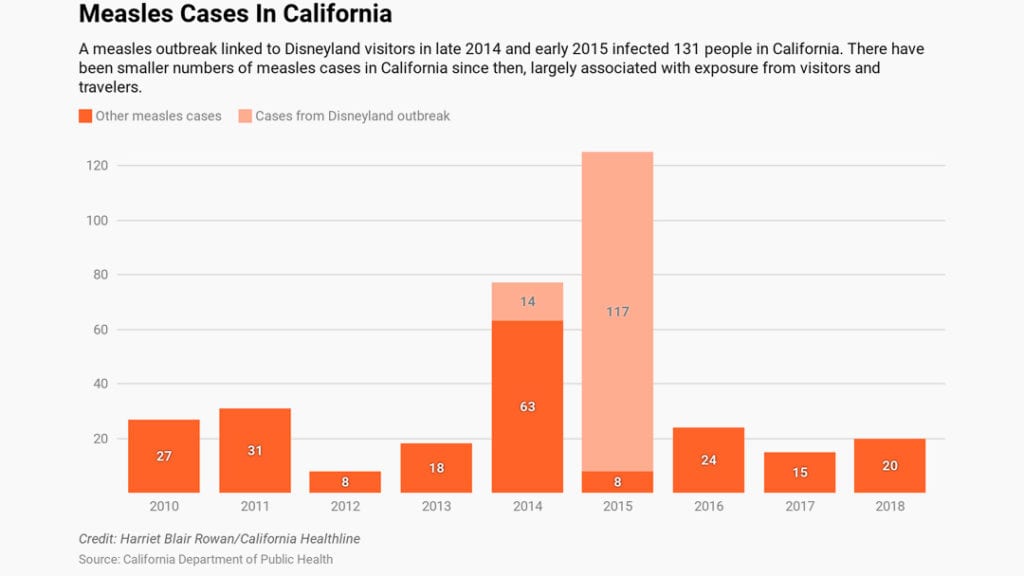 Could this trend be contributing to the loss of momentum in vaccination rates?

“I think that’s definitely a concern,” said Dr. James Watt, chief of the Division of Communicable Disease Control at the California Department of Public Health. He said, however, that the elimination of personal belief exemptions in the 2016 law still far outweighs the rise of medical excuses. “So that’s reassuring to some degree,” he said.

Overall, California’s measles vaccination rate is now 96.9 percent, well above the desired threshold. Watt said, “We do have this particular concern, as we have in the past, about places where there may be pockets of low immunization coverage” — such as individual schools.

Three rural Northern California counties — Sutter, Trinity and Nevada — have measles vaccination rates below the 90 percent threshold widely considered to be the minimum level for effectively stopping the spread of the disease, according to data from the public health department.

Measles causes a high fever and a distinctive rash, and can lead in some cases to severe complications in children such as encephalitis and pneumonia, which can be fatal.

The federal Centers for Disease Control and Prevention recommendsthat children get their first dose of measles vaccine (MMR), which also protects against mumps and rubella, at 12 to 15 months of age and a second dose between 4 and 6 years old.