How domestic violence survivors could be given a moment to ‘exhale’ 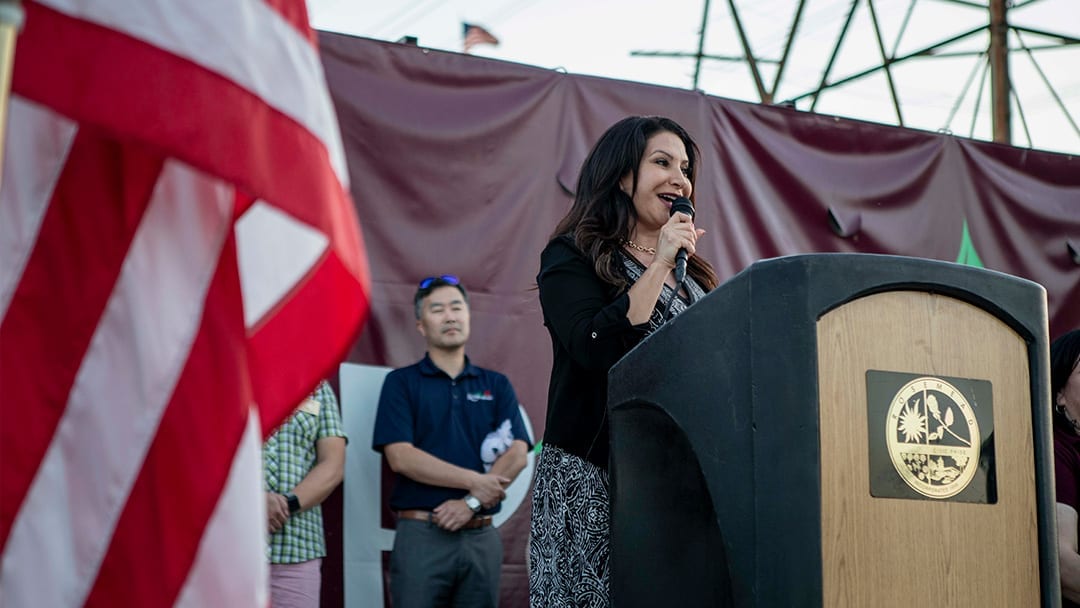 In 2016, when Susan Rubio was on the Baldwin Park City Council, she famously accused her then-husband, Assemblyman Roger Hernandez, of domestic violence. He had been beating her, she told a Los Angeles County court, since late 2013, just months into their marriage, but she had covered it up — telling hospital staff she had hurt herself working out, for instance — because both were elected officials and because she feared he’d retaliate.

Three years later, Rubio and Hernandez are divorced, he no longer holds office and she’s Sen. Susan Rubio, a freshman Democrat with a bill — co-sponsored in the Assembly by no less than her sister — to lengthen the statute of limitations on domestic abuse. Senate Bill 273  would provide officer training for domestic violence cases and give authorities eight years instead of three to prosecute abuses for which new evidence emerges.

Her aim, she says, is “to make sure that women have more time to deal with their personal struggles and really have the courage to come forward and bring their abusers to justice.”

“When my story broke, so many women decided that they wanted to tell their stories to me, hundreds of them,” Rubio said. “One of the things that I found was common in all of the stories that were told to me is that that there is a deep-rooted trauma and paralyzing fear that comes from their experience — and some of them take years to overcome.”

The extended statute of limitations would apply to cases in which the perpetrator confesses or there are videos, photos, or written or electronic communication that emerge and can be used as sufficient evidence.

Though defense attorneys and civil liberties groups have expressed reservations, SB 273 sailed through the Senate 36-0 and is pending in the Assembly.  Elaine Whitefeather, who directs A Community For Peace, a Sacramento-based nonprofit aimed at curbing domestic violence, says the measure, if it passes, will give abuse survivors such as herself “a minute to exhale.”

A longtime advocate, Whitefeather said having a public figure share her personal experience is, in itself, a game-changer.

“For someone like , first of all, to even get to be a senator, there’s something,” Whitefeather said. “And for each of us who came to testify and tell our stories, you feel our hearts are right there.”

Rubio’s story didn’t get told easily. She said it wasn’t until Hernandez menaced her outside a courtroom during divorce proceedings that she decided, at her lawyer’s insistence, to seek the restraining order, even though she knew it would become a matter of public record. Her allegations of ongoing “pushing, shoving, hitting and choking” with hands, broomsticks and belts by Hernandez, spelled out in her April 2016 request, generated lurid statewide headlines.

Assemblywoman Blanca Rubio, who is Rubio’s sister and SB 273 co-author, said their Mexican-born parents were devastated when Susan’s domestic violence case became news, and confused: English isn’t their first language. She said that they wanted to keep everything quiet, which only compounded her sister’s stress.

“I think culturally, a whole bunch of communities feel that domestic violence should just stay in the home,” Blanca Rubio said. “That’s not something you talk about. You don’t air your dirty laundry to anybody.”

Hernandez, who had been similarly accused by an earlier girlfriend, called the allegations “100% false,” chalking them up to contentious divorce proceedings, and ignored a public call by two leaders of the Legislative Women’s Caucus for him to take a leave of absence pending the judge’s decision. At the time, many fellow lawmakers, including some female Democrats, took his side.

When a Superior Court judge later found Rubio’s claims to be credible and ordered Hernandez to stay away from her for three years, Assembly Speaker Anthony Rendon stripped him of his committee assignments. Hernandez, who was terming out and preparing to run for Congress, went on a medical leave until his term in the Legislature ended, and dropped out of his congressional race.

He told reporters that Rubio was “evil” and “a trained actress” who had deceived the judge and “crippled my reputation.” His former attorney Donald Schweitzer said he still believes Rubio sought the restraining order, and the publicity that went with it, “not really for her own protection, but … to get back at him” because “he had tried to break off the relationship.”

A subsequent 2018 bid for West Covina City Council landed Hernandez in fourth place, and earlier this summer, he emerged at the Coachella City Council in a public confrontation with ex-partners in a cannabis dispensary project. He did not respond to CalMatters’ requests for comment.

Rubio, meanwhile, said the experience, while painful, was also “therapeutic,” particularly as the “Me Too” era unfolded. As consciousness was raised on sexual harassment, she said, she fumed watching Democrats who had stood by Hernandez now vowing to protect women.

Shay Franco-Clausen, who testified for SB 273, said she understood Rubio’s arc as a domestic violence survivor and an elected official. (Franco-Clausen, 44, is a Santa Clara Valley Open Space Authority board member.)

“It took me 27 years to say anything because I lived in shame through the process of being involved in intimate partner violence and domestic violence,” she said. “Abuse was my normal. So when I testified, I testified as a lesbian, Afro-Latina from San Jose saying this can happen to anybody. It’s in every neighborhood.”

Opponents of the bill, including the American Civil Liberties Union of California, and the California Public Defenders Association, say extending the statute of limitations could threaten defendants’ rights and weaken an incentive for prosecutors and police to address reports of domestic violence swiftly.

They also argue that resources would be better spent on rehabilitation and public education. Margo George, co-chair of the Public Defenders Association, noted that abusers often have witnessed or themselves been victims of violence, and that a public health perspective is more effective.

At the moment, George said, abusers convicted of misdemeanor domestic violence are typically ordered to attend — and pay for — a year-long anger management program. But many end up being continually re-referred because they cannot afford the cost or because their work schedule doesn’t accommodate a program with fee waivers.

“Somewhere in the middle is the answer,” George said. “There’s a human side to the other side of the story as well.”

The Rubio sisters say they understand the need for balance, and the wisdom of rehabilitation. “ is it social justice when you’re saving all of these perpetrators but not including victims into the equation?” asked Blanca Rubio.

Susan Rubio says she has moved beyond the episode with Hernandez. “This is really not about me,” she said. “My case is done.” This bill, she said, is to make it easier for future domestic violence victims to come forward, and deal realistically with the question she faced: “Why didn’t she say something sooner?”

“There’s always this need to somehow analyze the motive of the victim when they come forward,” she said. “And the reality is that victims come to their own realization when they’re ready at different times in different points of their life.”