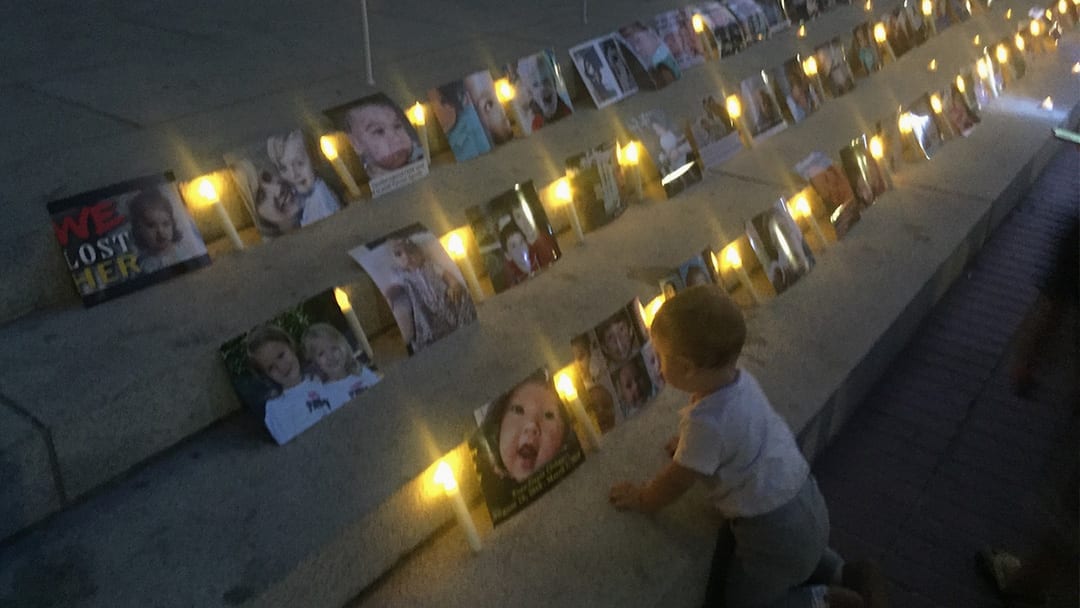 California has a new vaccination law on the books. It cracks down on inappropriate use of medical exemptions that allow kids to skip some or all vaccines and still enter school. It gives power over the exemption process to public health officials and will create a vaccination database of all children with medical dispensation.

Supporters of the law are pleased that doctors will no longer be the final authority on medical exemptions and could be investigated if they write too many. The more children who get vaccines, the safer schools will be for all kids, the proponents say.

Critics fear the law will effectively shut down access to waivers for kids who could be harmed by vaccines, which carry some risk, or who need them for other medical reasons. Doctors may fear the investigative provisions of the law, opponents say, and thousands of children could even be tossed out of school if they are not fully up-to-date on vaccines.

Here are five things to know about the law, which goes into effect Jan. 1. 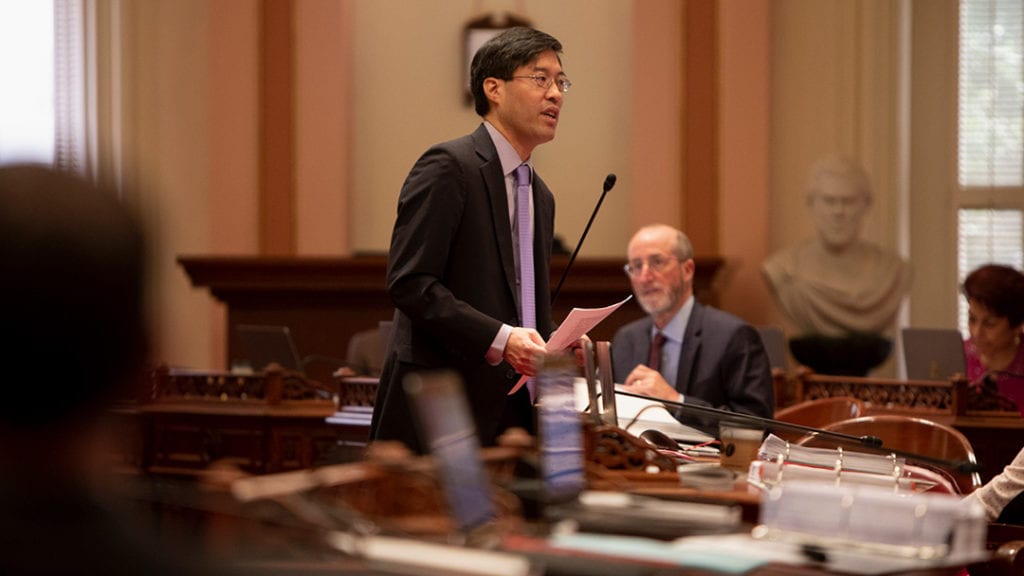 What does the new law do?

In California, children are required to be vaccinated, or have a medical exemption, to attend school. The new law creates a review process that gives public health officials the final say on those waivers, with the authority to reject them. Reasons for medical exemptions must still follow strict guidelines, and doctors will now be barred from charging any fees for exams or forms related to such dispensation.

Democratic state Sen. Richard Pan, the law’s author, said he was concerned when the number of medical waivers rose across the state after a previous law that he wrote eliminated personal-belief exemptions in 2016 but kept medical exemptions intact. Pan said his goal this year was to keep physicians from issuing waivers for pay or for reasons that are not allowed.

The law, signed by the governor last week, requires doctors to examine patients and submit their recommendations to the state Department of Public Health. State officials will then cross-check recommendations against guidelines from the Centers for Disease Control’s Advisory Committee on Immunization Practices or the American Academy of Pediatrics.

Currently, the state is not involved in how students are granted medical exemptions. Parents get them from doctors and submit them to schools, and schools with kindergartens are required to submit aggregate data to the state each autumn. The state does not receive exemption forms or information about doctors writing exemptions, according to the Department of Public Health.

Starting next year, parents will continue to get waiver letters from doctors, as they do now, and submit them to schools. Starting in 2021, the state is to have a standardized form and a new submission process: Doctors will send exemptions directly to the state for review and dissemination to schools.

Once the law takes effect in January, a state health official will begin reviewing all medical exemptions at schools in which fewer than 95% of students are vaccinated, from doctors who submit five or more exemptions in one year and from schools that have not shared vaccination rates with the state.

If the state determines a physician is “contributing to a public health risk,” it will report the physician to California’s medical board. The state will cancel waivers written by doctors who are under investigation by the medical board.

“It is my hope that parents whose vulnerable children could die from vaccine-preventable diseases will be reassured that we are protecting those communities that have been left vulnerable” by local doctors selling inappropriate exemptions, Pan said in a written statement.

Kids with medical exemptions issued before next Jan. 1 may keep their exemptions until they move into the next grade span. The spans are defined as birth to preschool, kindergarten to 6th grade and 7th to 12th grades. After July 1, 2021, students with temporary exemptions will need a new one each year, and no exemptions will carry over when a child enters a new grade span.

How did we get here?

Pan’s latest proposal brought opposition groups to the capital for weeks in protest. They were out in such force they sometimes essentially shut down meetings and regularly scheduled operations in the Capitol building. Advocates for Physicians’ Rights, Physicians for Informed Consent and parents from across the state testified against the bill in committee hearings, saying their children had been injured by vaccines, they didn’t want to be required to obtain more immunizations, their children had autoimmune disorders or similar conditions and they feared doctors would no longer be willing to provide exemptions.

Opponents did the same in 2015, when Pan first proposed elimination of personal-belief exemptions. At that time he agreed that a medical exemption is absolutely up to a physician and argued that parents would be able to find a practitioner to sign a form, so when he went after those waivers this year the opposition fought back again.

In addition, surprising some of the bill’s supporters, Gov. Gavin Newsom had reservations.

Initially, he expressed concern about state involvement in the doctor-patient relationship. But after negotiations with the author and some amendments, Newsom said he would support the proposal. But as the bill advanced through the Legislature, Newsom signaled he wanted more changes. Pan agreed again and put them in a companion bill. Newsom signed both bills into law.

The changes Newsom asked for allow kids who have medical exemptions before the law goes into effect Jan. 1 to keep them until they enter a new grade span. Doctors also gained some breathing room in the amended version: Initially, Pan’s proposal said they would sign exemptions under penalty of perjury, but that clause was removed. 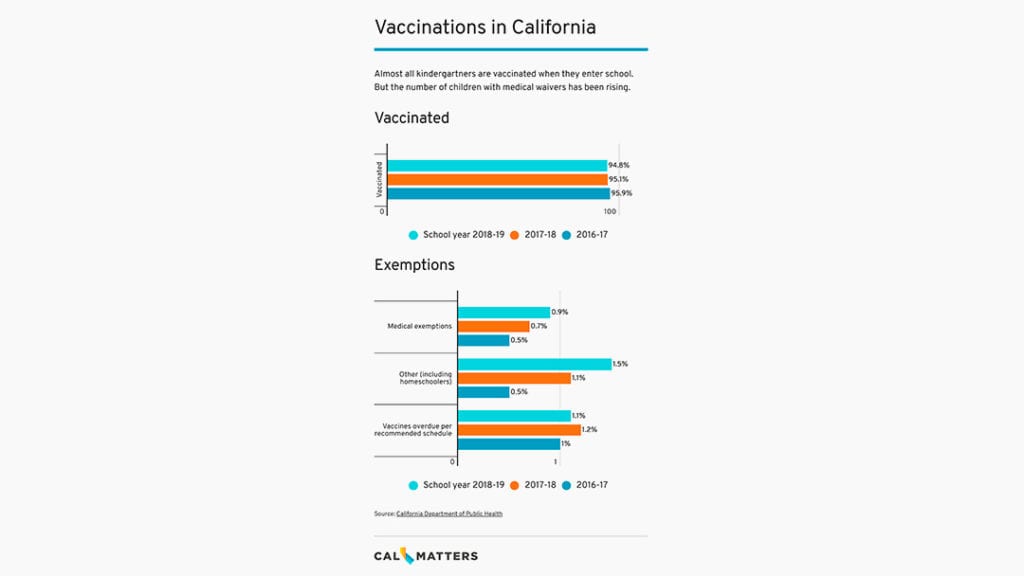 The vast majority of kids are vaccinated, so what’s the big deal?

A state Department of Public Health’s review shows that California’s vaccination rates are high: 94.8% of kindergartners in the last school year were vaccinated, a slight decrease from the year before. A slight increase in medical dispensations is simply families with previous personal-belief exemptions switching to medical waivers, say parents who oppose the new law.

Supporters of the new law, including the California Medical Association and the American Academy of Pediatrics in California, say it will strengthen community immunity and vaccines are safe and effective for keeping communities healthy. And it will crack down on physicians “practicing outside the accepted standard of care,” David Aizuss, president of the medical association, said in a written statement.

The concept of community immunity is that if enough children are vaccinated, those for whom vaccines are ineffective or who cannot be vaccinated for health reasons — they have autoimmune diseases or are being treated for cancer, for example — will be protected because everyone around them is vaccinated. This is also known as herd immunity.

Doctors who oppose the law say they are concerned about losing their right to say what’s best for their patients, and about the lack of liability for those injured by vaccines, Debra Schaefer, spokeswoman for Advocates for Physicians’ Rights, said by email.

“The CDC itself warns that there are risks involved with vaccinations, and where there is risk, there should at least be a discussion between a doctor and a patient, like with any other pharmaceutical,” she said. “This bill is nothing more than government overreach….Doctors were scared to write (medical exemptions) before this bill; this is just creating an additional killing effect.”

Other opponents say the law tries to solve a problem that doesn’t exist. Instead, it may force thousands of children to leave school or quickly get caught up on vaccines even if they have legitimate medical exemptions, said Toby Rogers, an independent researcher and prominent critic of the law.

“If you are missing a single shot in this bloated schedule, you are considered noncompliant and kicked out of school,” said Rogers, referring to the CDC schedule of vaccinations for children. In California, kids are required to receive 15-16 vaccine shotsto enter kindergarten. Some of the shots carry combined doses.

Rogers suggested the state focus instead on the larger percentage of children affected by such diseases and conditions as diabetes, asthma, autoimmune disorders and such conditions as autism.

Are vaccines dangerous, as some critics say?

Critics of the new law argue that it does not properly acknowledge the risk in vaccines. The law states that “for all but a small number of individuals, immunizations are safe and effective,” but does not elaborate.

Other opponents say the new requirements ignore the real needs of children who have been injured by vaccines and could be further harmed if forced into more. For example, they could have allergic reactions to vaccine components or have other underlying health conditions.

Vaccinations also can have side effects, ranging from fevers and seizures to very rare cases of death, according to the literature included with the medications and the Centers for Disease Control and Prevention. In 1986, the federal government createdthe National Childhood Vaccine Injury Act. that freed pharmaceutical companies from liability in cases of such injury. Under that law, billions of government dollars have been paid to families with children harmed by vaccines.

The group Physicians for Informed Consent, which opposes California’s new law, saysit is partly based on misinformation. The organization argues that some of the vaccines required for school are for illnesses that are not contagious and therefore do not affect herd immunity or other children. Those include immunizations against tetanus and Hepatitis B, which is first administered to newborns for an illness transmitted through sex and intravenous drug use.

Opponents also point to the Vaccine Adverse Effects Registry and the National Vaccine Injury Compensation Program as evidence that vaccination decisions should be left to physicians.

So is this fight over now?

Robert F. Kennedy Jr., a vocal opponent of the California law, said at a rally last week that his organization, Children’s Health Defense, intends to sue the state to block the law. And a group of opponents this week began the process of trying to overturn the new law through a ballot measure that would go to voters next November.