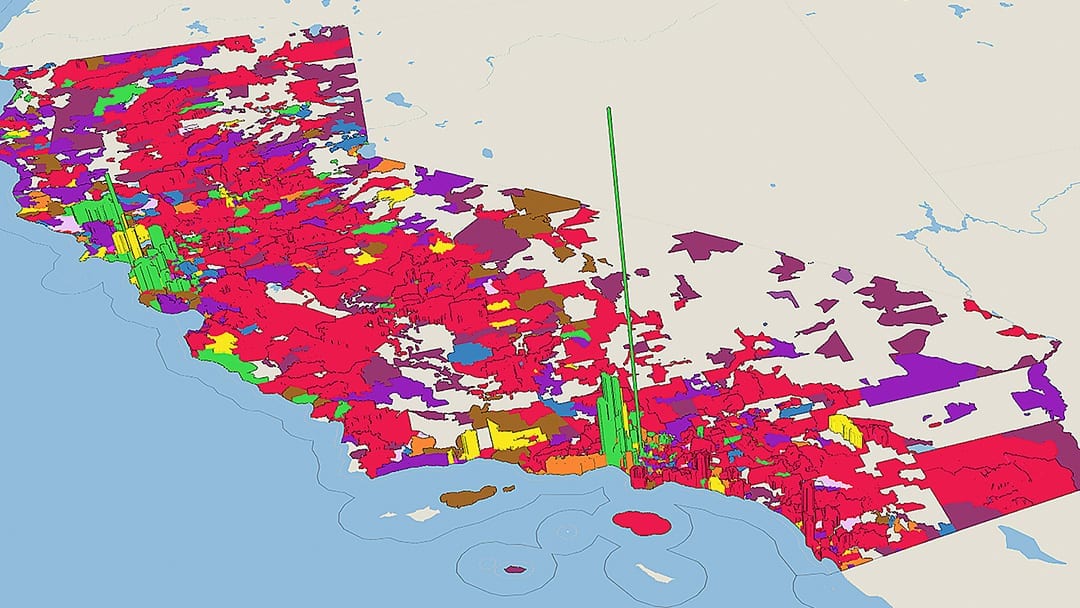 Polls suggest Democratic Sen. Kamala Harris is no longer the front runner in her home state. But year-to-date, she remains the preferred candidate by that other major metric of campaign success: money.

Yet even in the race for cash, her share of itemized California contributions has plummeted from a high of 60% in January to a low of 8% in September.

Last month, the single candidate taking the largest portion of those California contributions was President Donald Trump, with 30%. But that doesn’t mean the “Resistance State” has suddenly gone all Trumpy — keep in mind, 70% of contributions went to the array of contenders aiming to oust him.

Another caveat: This data doesn’t capture small donors. Most people don’t give money to presidential campaigns, and even fewer give enough to show up on federal campaign finance databases. Contributions only have to be “itemized,” with the name and zip code of the donor made public, if that presidential donor’s contributions amount to at least $200 a year.

The latest round of campaign finance totals just published by the Federal Election Commission show Harris raised $11.5 million in itemized contributions from California in the first nine months of 2019. That’s more than any other candidate.

Propelled by a telegenic campaign rally in Oakland and soaring national expectations, Harris took in over $2 million in both February and March of this year. Since then, former Vice President Joe Biden has entered the race and both Massachusetts Sen. Elizabeth Warren and South Bend, Ind. Mayor Pete Buttigieg often elbowed Harris out of the limelight. Her polling numbers have slumped accordingly.

Not uncoincidentally, Harris’ financial take came in below $1 million in both August and September, making up around 10% of total itemized contributions from California.

That drop-off in financial support is particularly damaging to Harris’ campaign which, more than any other save that of Tom Steyer, is dependent on California cash. Through 2019, just over half of Harris’ itemized donations came from the state.

Steyer, a billionaire former hedge fund manager whose campaign is largely self-funded, is the other prominent Californian in the race. A third Californian, author/spiritual guru Marianne Williamson, ranked just after Steyer and Harris among candidates who collected the biggest portion of their campaign cash within the Golden State.

According to the campaign finance analysts at OpenSecrets, donors giving more than $200 a year to a White House wannabe belong to a rarified class, consisting of only half a percent of the U.S. population in the 2016 election. But that group does provide the majority of individual contributions — two-thirds in 2016.

It’s worth noting that some presidential candidates report receiving more than half of their political money nationwide from small donors. A FiveThirtyEight analysis indicates those candidates include business Andrew Yang, Texas Rep. Julian Castro, Williamson, Sanders and Warren.

Keeping tabs on how every candidate is doing is yet another way to measure the health of their campaign in California. And that’s particularly important in 2020, when voters here will be among the first in the country to vote because of the state’s March 3 primary.

The itemized contribution numbers also offers some insight into the surprisingly varied political geography of the state. Despite its reputation as a deep blue anti-Trump bastion, breaking down itemized contributions at the zip code level tells a more complicated story.

In 785 zip codes, President Trump received more itemized contributions than any other candidate — Democrat or Republican.

In the map below, hold down your Control or Command key and scroll to zoom in and out. And use the magnifying glass to search for your own zip code.

The top Trump-backing zip code: 92067. For non-wealthy southern Californians, that’s the tony enclave of Rancho Santa Fe, just north of San Diego. Residents there have given the president $131,414 this year so far.

Top zip code for Harris was in downtown Los Angeles. Buttigieg topped out in West Hollywood. And Biden’s top neighborhood was Tiburon in Marin County.

Looking only at the Democratic race, color coding each zip code by the candidate who received more itemized contributions than any other, the state is a rainbow of political diversity.

All that purple indicates Vermont Sen. Bernie Sanders was the top recipient of itemized contributions from more California zip codes than any other Democratic candidate. That’s 231, compared to 220 for Harris and 88 for Warren.

But the geographic diversity of Sanders’ approach can be misleading since many of the zip codes in which he dominated gave relatively little.

The 3-D map below corrects for that. By showing the financial totals for the top funder in each zip code, this much becomes clear: Most of the political money here is coming from San Francisco and Los Angeles. Using your Command and Control keys, the map allows you to zoom, tilt, spin and explore the towers and valleys of California campaign cash. (And if your browser has trouble displaying the interactive version, you can see a 2-D version here.)

Or to show this another way, while Trump and Sanders have “won” more zip codes than any other candidate, they haven’t struck gold in the wealthier sections of the state where candidates like Harris, Biden and Buttigieg have cleaned up.

Also while Harris out-raised the president in 2019, Trump, who has been soliciting money for his reelection since inauguration day, garnered more than $3 million from Californians in 2017 and 2018.